The Aurora Dialogues, moderated by international broadcaster Nik Gowing, began with opening remarks from Joachim Rogall, President and CEO of the Robert Bosch Foundation and Ruben Vardanyan, Co-Founder of the Aurora Humanitarian Initiative, and was followed by a conversation between Dorothee Nolte, Editor of German media outlet Der Tagesspiegel, and Dr. Tom Catena, who was announced as the Chair of the Aurora Humanitarian Initiative on the first day of the forum. Dr. Catena spoke of his first-hand experience seeing how conflict can ravage communities, as the only permanent physician in the Nuba mountains in Sudan where human aid is currently restricted. He further explained that his experience has helped him better understand the need to foster a strong connection between humanitarian activists and those affected by humanitarian crises.

The opening panel, titled, “A World Under Pressure” saw panelists decry the increasing pressure placed on humanitarianism work. Cem Özdemir, Member of the German Bundestag, stressed that European democracies are currently threatened by the rise of illiberal regimes. “Liberal democracies are under threat”, Özdemir said. “Unfortunately, we have more and more countries that are threatened by illiberal regimes. What is happening in the world is because we allowed it. We can be the same people to stop this. One country alone cannot make a difference, but the EU collectively can make a difference.”

Day two of the Aurora Dialogues began with a discussion on “Humanity in a Fragile World”. Ambassador Wolfgang Ischinger, Chairman of the Munich Security Conference and former German Ambassador to the U.S. and UK, called for each state to be responsible for raising its voice against injustice. “We in the EU and Germany have provided a catastrophic picture of our inability to deal with what has been the worst humanitarian crisis in decades, the war in Syria,” he said. “We looked away. But even if you look away you are still guilty. If you can do something and you choose not to, then you are guilty.” Ambassador Ischinger added, “We have seen a depreciation of international law and the resulting erosion of trust already having a devastating effect. We need to reinterpret international law into a direction that protects humans and citizens and not dictators.” The panel further highlighted that human security must be prioritized in international law and that European countries can no longer hide at the side lines of humanitarian catastrophes happening around Europe.

Ruben Vardanyan, Co-Founder of the Aurora Humanitarian Initiative told participants that the biggest challenge in the world today is indifference. “We are currently living in a world which is becoming increasingly polarized - this is fueled by a lack of trust and misinformation,” he said. “In today’s society, it is becoming increasingly important to collaborate and build a network of people you can trust. Personal ties are key, and I am extremely glad to see that this year’s Aurora Dialogues has once again brought together outstanding representatives doing exemplary work in the field of humanitarianism. Thank you for being part of the Aurora movement and for bringing hope and helping to preserve the future of humanity.”

The Aurora Dialogues concluded with a “Call to Action” by Dr. Tom Catena, who in his impassioned address referenced the mission of the Aurora Humanitarian Initiative which uses the experiences of the Armenian Genocide to empower modern day humanitarian heroes to help those in urgent need of basic humanitarian aid and continue the cycle of giving internationally. In his call to action, Dr. Catena, declared, “Just as Armenians rose from victims to humanitarian donors - the Aurora community should emulate that and take humanitarian action and fill the “humanitarian void”.

You can find the links to the videos of 2018 Aurora Dialogues Berlin sessions and discussions (in English) below:

A World Under Pressure

A Conversation with Tom Catena

Humanity in a Fragile World

Subtitle:
he event titled “Humanity in a Fragile World – Partnering for Change” focused on discussions about the on-going refugee crisis, displacement and migration, conflict scenarios and the growing trend of populism.
Header image: 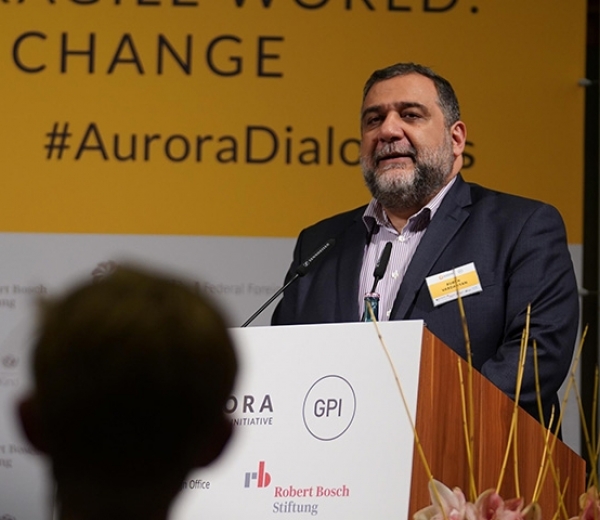