Andreas Rickert, CEO and Founder of PHINEO, stressed the importance of a strong civil society scaling it up to scale up the impact. According to him, governments do play role in social issues, but they are not able to solve the problems alone. The same goes for the private sector. “I think that part of the solution is the so-called “third sector” – civil society. But many people do not know how big it is, and most people completely underestimate the potential we have within civil society,” he said.

Geert Cappelaere, Regional Director for the Middle East and North Africa, UNICEF, brought up the importance of reaching more people, as for many assistance is arriving too late. Conditionality makes obstacles to serving all people. “How can we increase the impact? Maybe we can start with funding. It is important to flag how funding has become growingly conditional in terms of meeting other agendas than the needs of people that are supposed to be served. It is about political agenda, economic agenda, fiscal agendas, and not any longer just the needs of people we are serving,” he declared.

Goran Buldioski, Co-Director, Open Society Initiative for Europe, and Director, OSF’s Hub-Office in Berlin, continued by expressing his concern that civil society was becoming a part of the system, especially in the developed world. “In the rich world we have to see the poor next to us. I think this is what we forgot,” Goran Buldioski said.

Megan Roberts, Deputy Director of Policy Planning, United Nations Foundation, emphasized the importance sharing values while working with the private sector. She also brought up an example of a survey that had just been done by a private company. According to it, respondents in the private sector believe that working with purpose and ethically driven strategy increase revenues. “I think the broader recognition of this opens a door to different types of partnership with different partners in civil society,” she noted.

Ruben Vardanyan, impact investor and social entrepreneur, Co-Founder, Aurora Humanitarian Initiative, spoke at length about the long-term effects philanthropy could and should have on the world. “First of all, it’s personal [but] donors giving money don’t put in the pressure to ask for results. That’s one of the problems. <…> You must build a system. Good news for us, the request [for this] will come.” 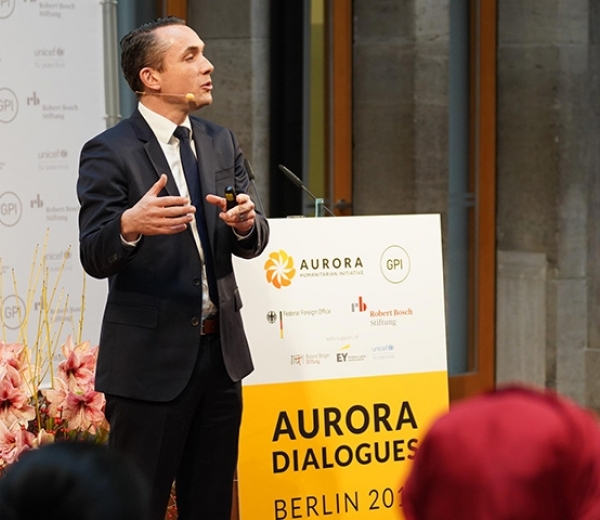