Sunitha Krishnan, Co-Founder of Prajwala and 2018 Aurora Humanitarian, talked about her traumatic personal experience as the driving force behind her desire to help others. “I see the worst of humanity and in that space trying to create hope trying to create a sense of recovery in terms of dignity – that’s what I do. In the last 25 years I’ve removed around 20,000 women and children from prostitution and sex slavery,” she said.

Saran Kaba Jones, CEO and Founder of FACE Africa and Richard von Weizsäcker Fellow, brought up the fact that sometimes one’s good intentions are not enough to solve a crisis, especially if one doesn’t yet have a firsthand experience of working on the ground. “It’s one thing to have these ideas of wanting to fix social problems when you’re thousands of miles away. When I got on the ground, I realized that education was the least of Liberia’s problems. There were so many competing issues,” she reminisced.

Katrine Camilleri, Director of the Jesuit Refugee Service in Malta and Roland Berger Human Dignity Awardee 2014/2015, explained what had motivated her to start helping people coming to Malta long before the global refugee crisis started. “I wanted in some way to take this opportunity to advocate for population, which seemed to be invisible and had no voice, and was seen very much as objects of charity more than people,” she stressed out.

Christopher Lockyear, Secretary General of Médicins Sans Frontières (MSF) International, highlighted the challenges faced by humanitarian organizations in their struggle to help others. “When you have a big structure, a big organization – and there are 40,000 people who work with us now – you take on a life of your own as an organization, and you get organizational and institutional interests coming into your decision-making. And I think we’ve somehow managed to keep people, patients, people in crisis, at the center of our decision-making,” he declared. 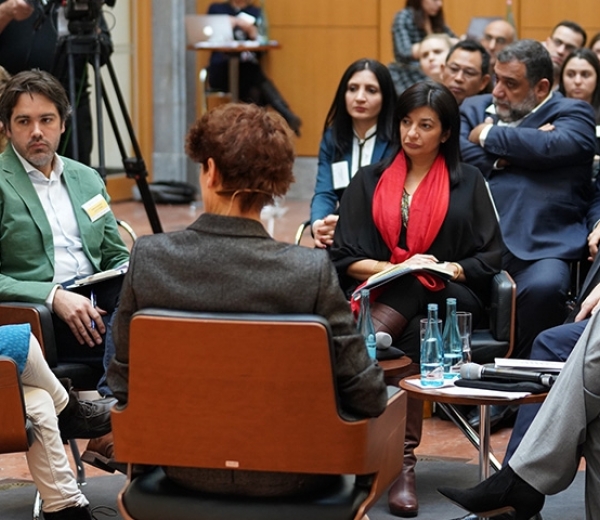