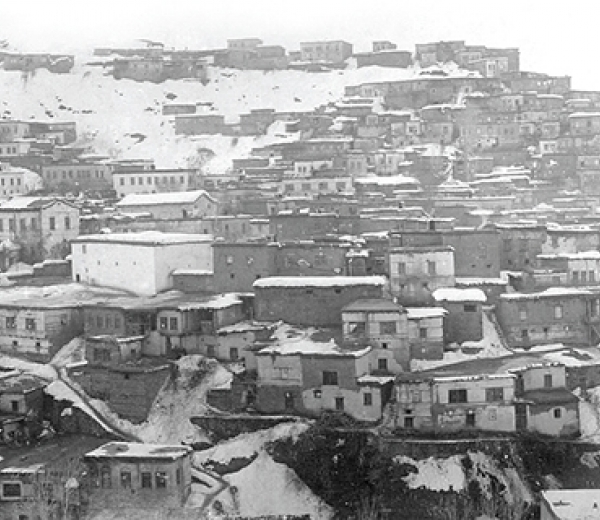 Text:
A view of Mush. Image courtesy of the Armenian Genocide Institute Museum, the Bodil Bjorn collection.
Aramayis Gasparyan, Jivan’s father, was born in 1898 in Mush. At the age of 17, with the encouragement of his father, he joined General Andranik’s troops as a volunteer. His two brothers also joined the troops. One of them was the farrier for Andranik’s horses. Of the three, two settled in Armenia; the third, Gevorg, disappeared.
Aramayis traveled from Turkey to Armenia with Andranik’s troops. Later, Jivan’s father settled in Solak, as did many other people from Mush. Among them was Khachatur Grigoryan, whose daughter Magtagh became Aramayis’ wife. That part of his family had settled in Solak before 1915; the rest went there in mid-1915. In those years, people from Khoy and Mush inhabited that village.
Jivan’s maternal grandfather Khachatur was a shepherd who kept only white sheep. He says that his grandfather would slaughter a sheep even if only its tail was black. “My maternal grandfather was a good eater and used to eat an omelet made from 20 to 25 eggs. He was a kind man, but never resisted harsh swearing when he saw anything unfair,” recalls his 87-year-old grandson.
Jivan Gasparyan was born in 1928 and spent his childhood in Solak. “In general, there were good people in our community – family-loving, dignified people. I remember how 30 people would gather around the short-legged table to have dinner. There was no bed, so we put thick felt mats on the ground. We had a clay oven and, when the weather was cold, we’d get our pillows, hang our legs in the warm oven and sleep,” he says.
The family didn’t talk much about what happened in 1915. “Once grandfather Khachatur had to calm his wife, grandmother Margarit, when she was telling her children what the Turks had done to the Armenians. The children were listening attentively, when grandmother burst into tears in the middle of the story, saying that the Turks had killed her relatives. My father told us that the Turks were vicious, that they were forcibly taking the pretty girls who were desired by their rulers. The girls fought back, they struggled. If they escaped, they would wander the mountains for months,” says Jivan.
Image: 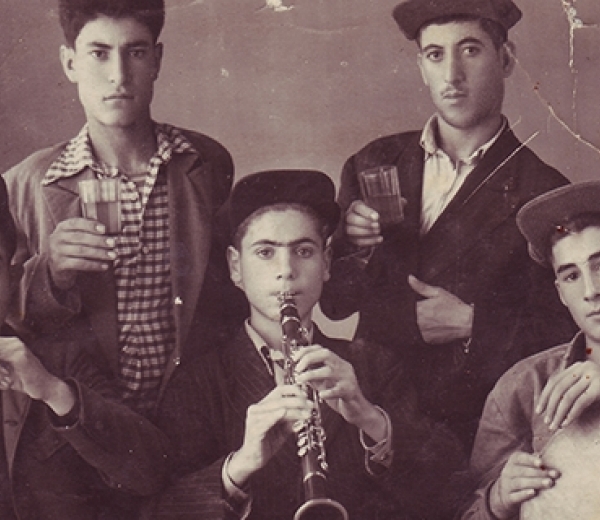 Text:
Folk Instruments Ensemble, 1944, 16-year-old Jivan Gasparyan in the center
Jivan’s father was a stonemason in Yerevan. He was one of the masons who built the Opera and Republic Square buildings.

“He used to tell me that every one of us has to add a stone for our country to prosper. If we remove a stone, nothing will be left of this country,” the duduk master recalls his father’s words.

When World War II began, Aramayis, together with his two brothers, left for the battlefield. In his absence, Jivan’s mother died and was buried by their neighbors. “They put her into four planks painted white, loaded the casket onto a truck and buried her,” says Jivan. Magtagh was buried in the area that is now the Pantheon. According to Jivan, in those days there were many graves of ordinary people there. Later Magtagh’s grave was destroyed. “We never learned what happened next, so my mother’s grave is deemed lost,” he adds.
“We were orphaned kids. Who was our master? Who was our Lord? We grew up without a mom or dad. We mingled in a thousand types of a society. When I began learning to play the duduk, my life changed. Eventually, the duduk saved me,” says Jivan, adding that his father returned home after the war.
Image: 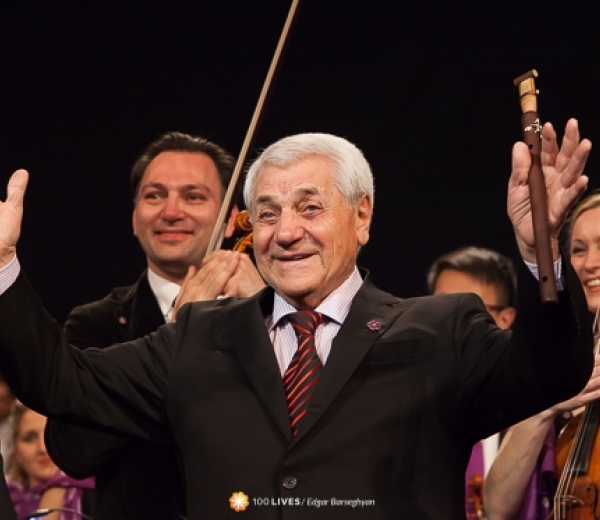 Text:
Jivan Gasparyan at the “Revival” concert by “24/04,” dedicated to the Centennial of the Armenian Genocide. April 24, 2015, Yerevan.
“There is no bad nation in the world; there are good and bad people. I do not blame the present-day Turks. If the Turkish young people are smart, they will urge their government to apologize. They have to be made aware that once we were oppressed, killed, slaughtered, impaled on pikes – my grandmother would tell horrible stories,” says Jivan.
Jivan Gasparyan heard that Kurds now live in his ancestral home in Mush. He points out that he once planned to travel to Van, Mush, Sassoon and climb Mt. Ararat, but his leg was injured, making it impossible for him to go. He is hopeful that someday, even if it’s not him, perhaps his grandson – duduk player Jivan Gasparyan Jr. – will find his grandfather’s house in Mush.
Header image: Jivan Gasparyan Sr. and Jivan Gasparyan Jr. © PAN Photo
The story is verified by the 100 LIVES Research Team.
Subtitle:
Master of the Duduk saved by his instrument
Story number:
50
Author:
Aghavni Yeghiazaryan
Header image: 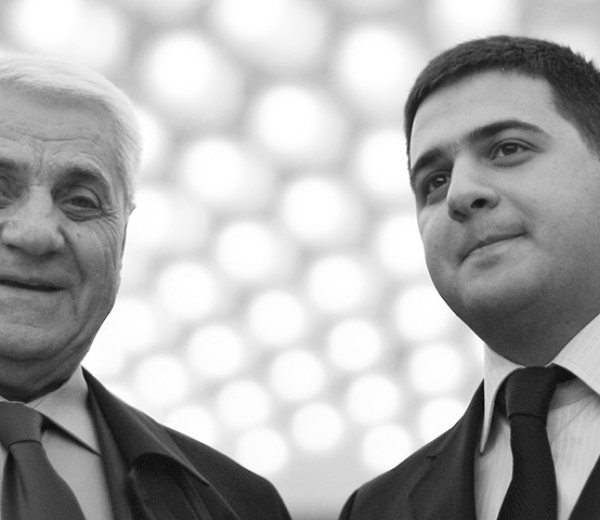