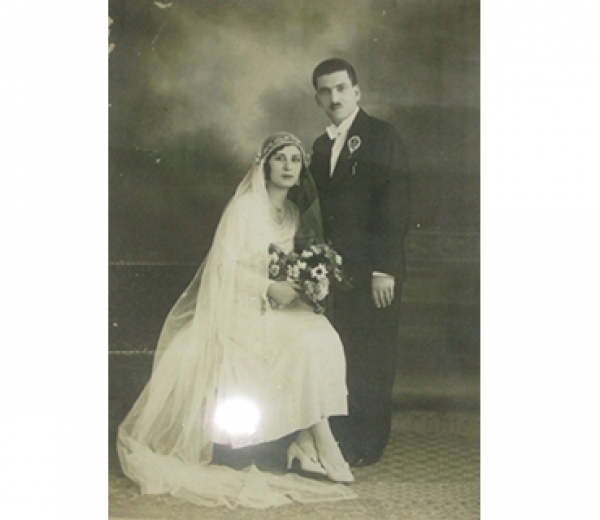 Text:
Siranush was two years Arshak’s junior. Her family wasn’t able to escape the town before the massacres began, but her parents managed to send their daughter to Syria. Siranush never saw them again. After marrying Arshak at the age of 16, Siranush helped her husband as best she could, washing the clothes of French soldiers stationed on the outskirts of Bourj Hammoud. The couple had seven children, the eldest of whom, Havag, would become Aline Kamakian’s father.
A coded warning
The fate of Aline’s maternal ancestors was no less tragic. Her grandfather Haig Mardiryan was born in the famous Musa Dagh region. The residents there refused to accept Turkish orders to leave their homeland and chose to fight instead. Haig was nine years old at the time. “Grandfather was too young to take part in the battles,” Aline says. “But they were short on fighters and the Musa Dagh Self-Defense Committee allowed the boys to help the men. My grandfather was entrusted with loading the rifles and delivering gunpowder to the trenches.”
For many days the besieged residents of Musa Dagh heroically repelled the assaults of the Ottoman army, but a lack of provisions created serious problems for the defenders. The Turks chose an alternative tactic: having been unable to overcome the Armenians in battle, they decided to starve them to death. The rebels were saved by access to the sea. The sailors of the passing French cruiser Guichen saw the flag that the Armenians flew from the top of the mountain. “Christians are in danger” were the words written on the flag.

The French evacuated the Armenians, and Haig and his mother were among those who were saved, while his father was killed in one of the battles.

The surviviors were taken to Egypt and placed in a refugee camp.
Haik’s future wife, four-year-old Manushak, was also among the Musa Dagh survivors. All of her relatives were dead. She grew up in an orphanage and never even knew her last name. The teachers at the orphanage school noticed a gifted girl with an interest in languages and sent Manushak to study in Cyprus. After receiving an excellent education in Nicosia, she moved to Beirut to teach foreign languages at a prep school. In Lebanon, she met and married Haig.
Image:

Text:
Together with her husband, Manushak played an active role in maintaining ties among the people who escaped Musa Dagh, keeping in touch with those who moved to Soviet Armenia. In 1946, when repatriation began, the family considered moving to Yerevan, but some relatives who had already moved there sent Haig and Manushak a coded letter. The message warned them that they should not move to the Soviet Union because many of the repatriates were persecuted and sent to Siberia as soon as they arrived. Even after that the Mardiryans kept in touch with Armenia and often visited Yerevan. They brought up their daughter Vardui and granddaughter Aline to love their historical homeland.
A very big family
After the wedding Vardui and Havag established a family home that welcomed not only relatives, but also numerous countrymen who often stayed at their house. “Our living room was always full of people,” Aline remembers. “People from Musa Dagh and Tomarza knew no better place to meet than at our home. I called them aunts and uncles and thought that all of them were our relatives. That was how we were raised. ‘All Armenians are one family,’ my parents would say.”
Image: 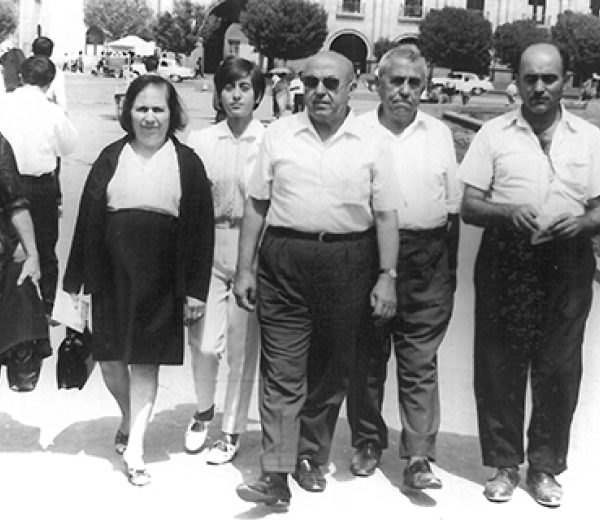 Havag Kamakian, who worked as a Maitre d’ at Beirut’s St. George Hotel, was a master of serving guests and setting the table flawlessly, while Vardui would create culinary masterpieces. She was well-versed in the traditional cuisines of both Musa Dagh and Tomarza. The su-bereg cheese pie from Tomarza was usually served after Musa Dagh harissa. “I often helped my mother to cook,” says Aline. “I always liked everything to do with the kitchen and entertaining people. But when I was young, I didn’t think I would become a restaurateur. Back then I was interested in finance.” 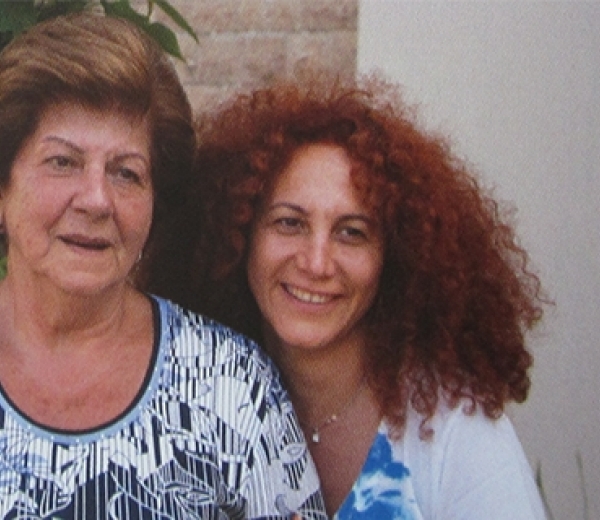 Text:
After graduating from university Aline Kamakian became a prosperous financier. Her career was quite successful: at the end of 1990s her brokerage office, IIC Sarl, was named one of Lebanon’s ten best. Kamakian’s insurance company, GM Insurance & Investment Consultant IIC, still turns a hefty profit. But her passion for cooking always burned within.
In 2002 Aline Kamakian and her cousin Serge Makaron decided to open a restaurant. “We bought a derelict building in Beirut’s Christian quarter and began to rebuild it,” Aline recalls. “We had no experience. Neither Serge nor I thought of it as a business opportunity. I am convinced that cuisine is a part of national identity and cooking is a part of national culture. We thought that we could contribute to the preservation and promotion of this culture.”
Image: 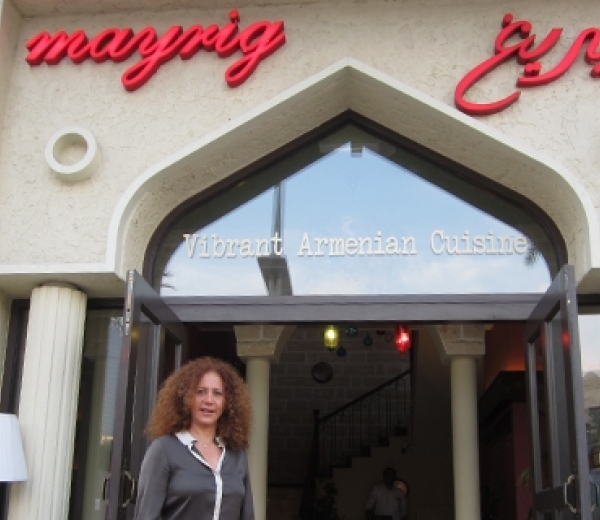 Text:
Their runaway success soon forced the companions to consider expansion. In 2010 they opened a new restaurant in the city of Jeddah in western Saudi Arabia. In October 2013 another “Mayrig” restaurant opened in Dubai, right in the city center, not far from the famous Burj Khalifa skyscraper. In addition to this, Aline and Serge opened another Beirut-based chain of restaurants under the name of “Batchig” (a “kiss” in Armenian). They already signed a contract to open a restaurant in Kuwait and they are looking to expand to Riyadh, London, Los Angeles and Cairo.

“Mayrig’s” menu includes 70 traditional dishes, many of which are unknown even to Armenians themselves: Aline researched recipes that were almost forgotten and that require a lot of time and patience.

The results of her studies were also published in an illustrated cookbook, “Armenian Cuisine,” written by Aline together with Barbara Drieskens. “Any Genocide is accompanied by the destruction or appropriation of cultural heritage,” says Aline. “My goal is to show how the Genocide affected even our national cuisine.”
Image: 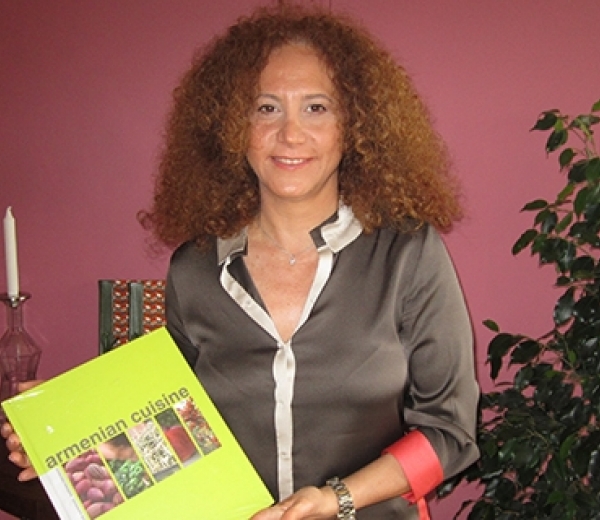 Text:
Aline Kamakian believes that the easiest way to interest a foreigner in your nation is to offer a delicious meal. “This method is nothing new. My restaurants are an attempt to show people that Armenians not only survived the Genocide, but retined the ability to enjoy life,” Aline smiles.
The story is verified by the 100 LIVES Research Team.
Subtitle:
Lebanese restaurateur explains the value of national cuisine
Story number:
219
Author:
Artem Yerkanian
Header image: 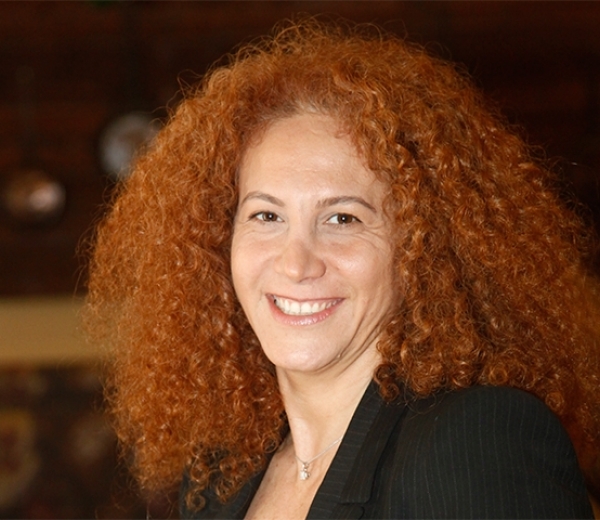