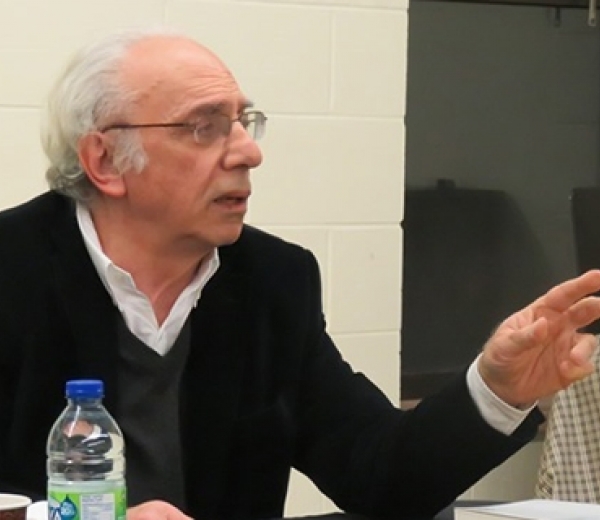 Text:
The guilt of survivors
Marc’s father Parseg was born in 1900 in Caesarea (modern-day Kayseri) in Cappadocia. For many generations, the Nichanian family produced great fresco painters. Legend has it that one of Parseg’s ancestors frescoed the Topkapi palace of the Turkish sultan.
In 1915, two of Parseg’s brothers went to serve in the Ottoman army, one as a doctor and the other as a pharmacist. Thanks to them, the family was able to escape deportation and settled in Konya. Parseg’s sister Zaruhi married an Armenian from Istanbul named Hagop der Hagopian. Later, he opened a print atelier in Paris, which became quite popular with Armenian intelligentsia settled in the French capital.
“My father inherited his talent from his ancestors. In 1920, when he was 20 years old, he came to France and began studies at an agricultural lyceum. He had a gift for architectural drawings. Without any special education, he had built several houses in the northern part of Paris,” Marc recounts. “Father died in 1957, when I was 11 years old. My mother and grandmother raised my brother and I,” says Marc.
Marc's grandmother was from Amasya in northern Antalya. Her name was Peruz Yepremyan (nee Mamuryan). For many years, Marc wore her wedding band on his finger. “My grandmother gave me this ring in 1977, the day when she went into the hospital and realized that she won’t be coming back. The ring had an engaraving of her father’s name,” says Marc.
Peruz married Hovhannes Yepremyan in 1912. Between 1900 and 1910, Hovhannes lived in the United States. In 1915, the family was driven out of Merzevan to Sebastia (modern-day Sivas). “Grandmother had a sister, Victoria, but everyone in the family called her Victor. She was 16 years old during the deportations. Her fate was quite common in those years: her relatives sold her to the local chief, kaymakam, in exchange for the family’s safety,” Marc says.

This tragic episode in his family’s history gets Marc deeply lost in thought – an eloquent manifestation of survivor’s guilt felt by those who lived through the horrors.

“For three years Victoria was subjected to abuse. She had two children by the kaymakam. All this time, her sister and other members of the family were living in the cowshed. This continued until the end of war in 1918. Together with her mother, Victoria fled to Istanbul. From there, she was able to go to the United States, where she found an Armenian husband through correspondence,” Marc remembers.
Marc learned this story from the letters his grandmother exchanged with her sister when fate planted them on opposite sides of the Atlantic. Peruz, Hovhannes and their daughter Silvi returned to Merzevan in 1919, and lived there for two years. “In July 1921, grandfather was killed in Merzevan during a raid organized by Topal Osman. The principal target at that time were the Greeks, but the Armenians were also killed in passing,” Marc recalls.
“The soldiers locked the women and children in the church, which they planned to burn. Her relatives gave my mother a cyanide capsule so that she could die without suffering. However, the church didn’t take fire, while my mother had already swallowed the poison. To avoid dying, she had to stay awake, so for the next three days they wouldn’t let her close her eyes. That’s the only story that my mother could tell.”
Marc falls silent, then continues: “Her life had stopped in its tracks that day. She stopped growing and remained small for the rest of her life. For another year, the family couldn’t leave Merzevan. Finally, in 1922, they came to Istanbul, and from there, in 1925, they moved to Aleppo, where grandmother’s oldest sister lived. Then the family moved to France.”
Image: 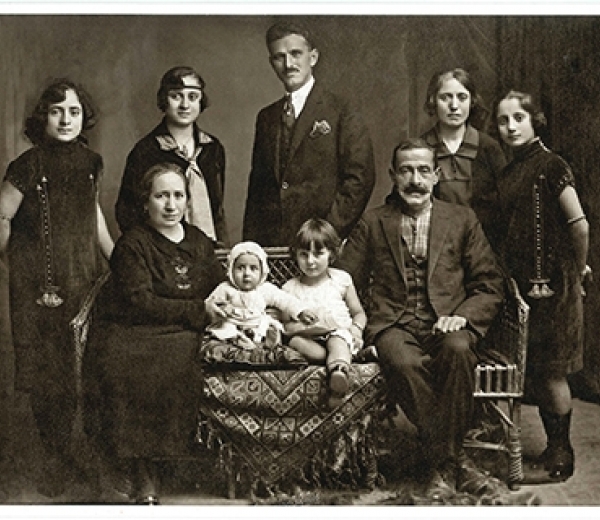 Text:
One language, one fate
“We had no books. We took them from uncle and aunt der Hagopian,” says Marc.
Marc began studying Armenian at the age when children usually learn to read. He remembers an old teacher “with a bushy beard,” who, instead of language lessons, would tell the boy about Armenian history. Later, at the age of 20, Marc opened the Armenian dictionary once again. At that time, he was a member of the European association of Armenian students, some of whom later became accomplished representatives of the Armenian diaspora. “Some of the students were from the Middle East. They spoke Armenian beautifully, and so I thought: why don’t I try it? It took me 10 years to learn to write in Armenian as well as they did,” he says.
Image: 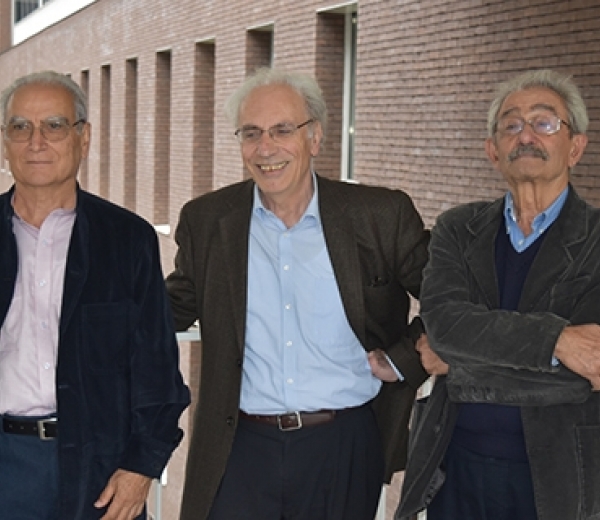 As a member of the diaspora, Nichanian envisioned the target audience for his works to live aboard, but gradually realized that his principal readership is in Armenia. Marc’s next piece of research will be published in Yerevan. In this work, the names of forgotten writers will resound in Armenia like an “echo from another shore.” 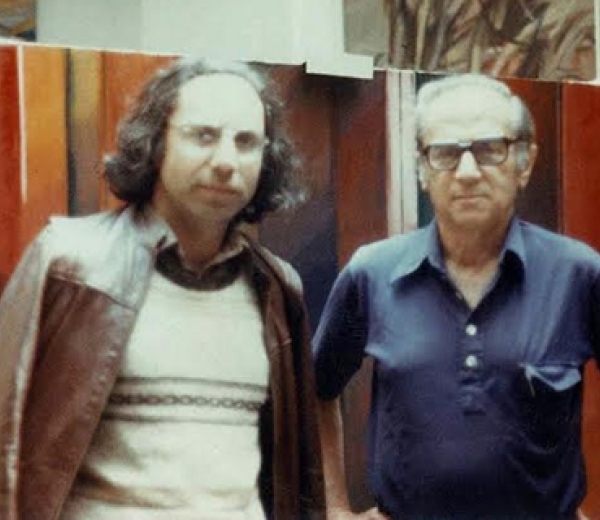 Text:
Return to the motherland
Since 2009 Marc has been coming to Istanbul on invitation from Sabanci University to share his knowledge and discuss the experience of the Genocide, particularly through the lens of Armenian literature. “When I received an invitation to come to Istanbul with lectures and seminars, I agreed without thinking twice,” says the philosopher who had never set foot on his ancestral land before that.
“During my first year I had amazing students, and all of them Turks. It was quite difficult for them to read the texts about the Armenian Genocide. The facts were hard to wrap their heads around, as they were used to seeing these events through their parents’ and teachers’ eyes. I was completely smitten by those students. After the lectures, they would come to my office, sharing their doubts and dreams with me. I did not expect such a reaction. I keep in touch with most of them to this day,” says Marc.
Marc admits to having gone to Turkey with a bias, but discovered real humanity there: “I didn’t just meet Turks, I met their humanity. And after talking to me, they discovered it inside themselves.”
Subtitle:
French philosopher and author of “The Historiographic Perversion”
Story number:
245
Author:
Tigrane Yegavian
Header image: 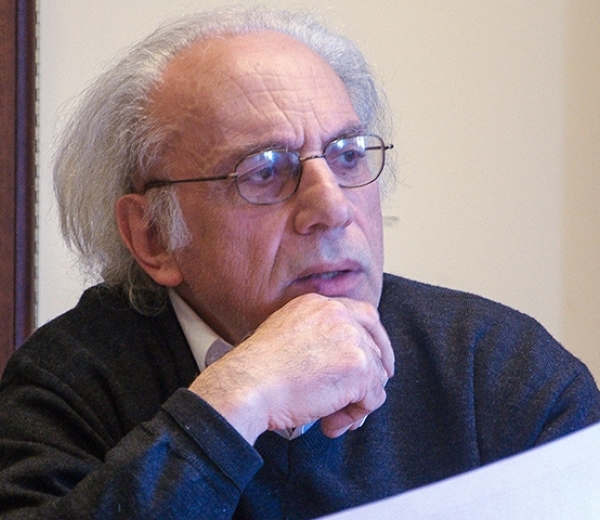