“My grandfather played a great role in shaping my personality. To never give in; to get up when you fall; to work and to create – I inherited these important characteristics from him. He was an amazing person who intimately shared his great willingness to live, create and build. As a child, he was forced to traverse unspeakable hardships – emigration, starvation, the loss of his homeland. But he was steadfast and strong, like a sturdy tree that gathered all family members in its protective shade until the end of its days,” Gor remembers. 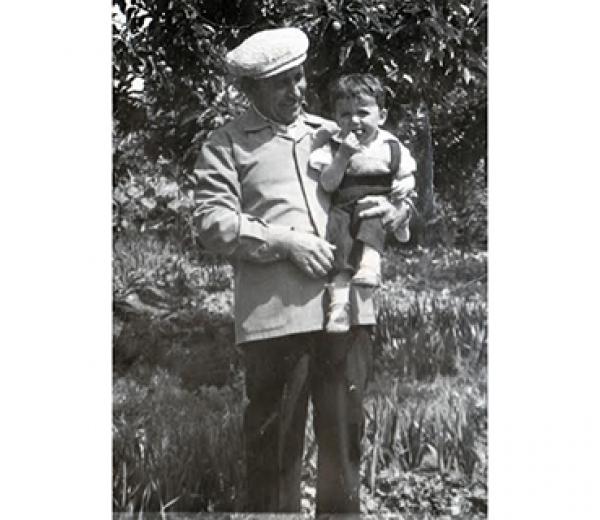 Mihran Avetisyan was born in 1903 in the village of Roustamgedouk (Bitlis vilayet, Manazkert Province), the eldest of Kostan and Chichak Avetisyan’s five children. Known as "the Avkos" (the family believes that the surname Avetisyan is a derivation), they were a large, prominent and well-respected clan that settled in Roustamgedouk some 200 years before. The two diaries that Mihran wrote in his later years, in handwriting that is sometimes illegible, relate how the Avetisyans and other Armenians left their once-flourishing homeland. 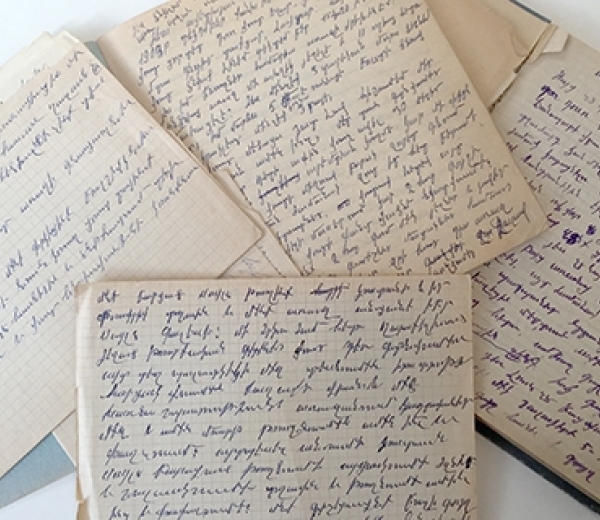 Text:
A family in exile
“In July 1914, at threshing time, the sun darkened. People began to weep and cry that the world was coming to an end. It got really dark. Fortune tellers at the time said that bad times were coming and, true to their word, the Russo-Turkish War broke out,” Mihran Avetisyan begins his émigré story.
Mihran’s paternal uncle Mkhitar was conscripted into the Turkish army and fought the Bulgars. Later, however, he went over to their side as an artillery commander and fought against the Turks. The family doesn’t know what became of him. A few months later, Mihran’s father Kostan Avetisyan was conscripted, which left no men at home to work.
“A servant and an ox-drover were left to manage the household affairs. All the women in our house worked day and night. My father ran away from the Turkish army several times. Whatever gold we had saved we gave to the Turks so they wouldn’t take my father back to the army. Thus we lost practically all our money,” writes Mihran. It is clear from Mihran’s memoirs that it never occurred to Armenians that they could be banished or massacred. All they knew was that the Russo-Turkish War was underway.
“Gradually, they started talking in the village that the Turks were planning to massacre Armenians,” writes Mihran. “The men were thinking about self-defense, but they had no weapons. Even their daggers had been taken from them.

One day, neighboring Kurds came to our village. Each one of them, fully armed, stood watch through the night outside the house of an Armenian they knew, so that Turks or other Kurds wouldn’t enter the village and kill us.

After a few days, even those Kurds fled after hearing that the Russians were approaching. We remained alone in the village. We’d climb onto the rooftops, looking out for the Russian troops.”
Soon afterward the Avetisyan family, like all Armenians in Roustamgedouk, set off on the path of exile. The men were serving in the Turkish army, leaving the old, women and children defenseless and unprotected. “We left the village in May of 1915. We had almost nothing left except for some wheat and a few animals,” Mihran writes.
Image: 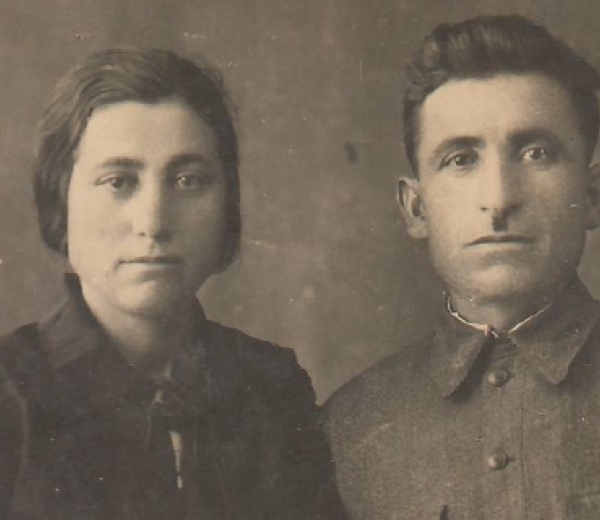 Text:
The entire Avetisyan family, along with countless others, headed toward Manazkert. Mihran’s memoir recounts the Turkish artillery opening fire on a field full of émigrés: “The road stretching from the Khamout Valley to the Alashkert Plain was a horrible sight – wagons overturning in the fields and waterways, heartbreaking screams of anguish. The troop detachment, in order to open the road, murdered mercilessly.”
In August 1915 the Avetisyans reached Echmiadzin and later the Sevan village of Yelenovka, where another nightmare began. Armenia was full of refugees and a deadly cholera epidemic spread among them. There were corpses everywhere. The family, which had survived the journey, suffered losses in Yelenovka due to sickness. Yet, despite the difficulties, they started a new life in the village of Verin Ghanlija (now Marmashen).
Return to Roustamgedouk
In 1915-1917, when Russian forces, assisted by Armenian volunteers, captured a large piece of Western Armenia, Mihran and his father Kostan, along with other men from Roustamgedouk, returned to that village. They didn’t bring the women, thinking they would cultivate the land and later relocate their families. “It took eight days to reach our village. It had been captured by the Kurds, so we moved to a neighboring village,” writes Mihran. They worked for a few months, tilling the lands of others to earn money to bring their families from Armenia. When a second wave of violence toward Armenians began, they went back to Verin Ghanlija. Their relatives regarded their return as a miracle.
In the 1930s Mihran and his father resettled in Gyumri; his mother had died some years earlier. Mihran married Hripsimeh, who was from the village of Khando. They had eight children and 15 grandchildren. Mihran became a renowned stonecutter in Gyumri, and relatives boast that his work wasn’t damaged in the 1988 earthquake. When he could no longer work as a stonecutter, he and his wife began growing flowers. They were the first flower vendors in Gyumri.
Image: 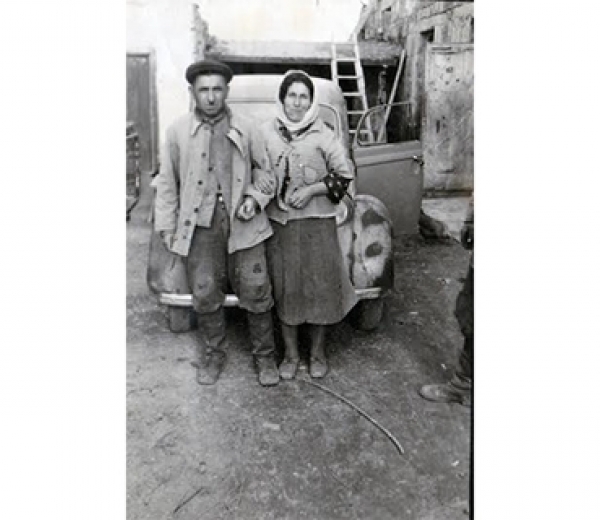 Gor Avetisyan believes that his grandfather Mihran’s house is where his painting began. “It was a colorful place, with a marvelous courtyard, always full of good vibes. Those colors and the environment, coupled with my granddad’s character, the memories he brought from his homeland, made me the painter I am. We would all gather in that beautiful courtyard and paint,” recounts Gor, whose paintings have been shown in numerous countries since 1987.
Image: 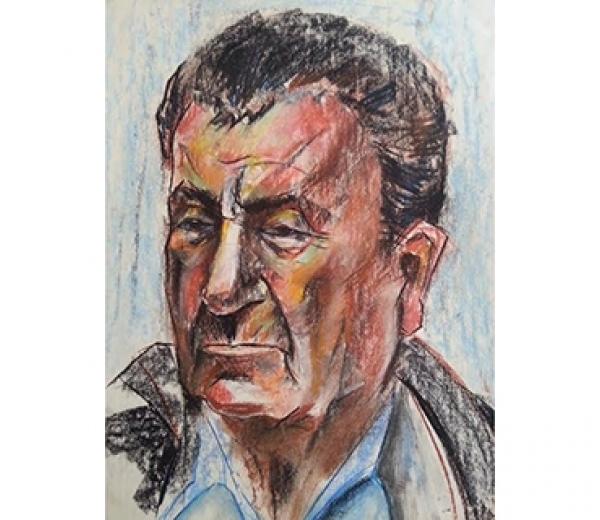 "One of my uncle Aramayis’ friends, Finnish photographer Lampinen, would frequently visit Turkey. Once, when he was our guest, my grandfather requested that he bring back some soil and water from the homeland. Back then, only a few people were travelling to Western Armenia and, for my granddad, the items he brought back were wondrous,” Gor remembers. The family kept the soil as if it was holy oil, scattering it on the graves of all the relatives who had emigrated to bring peace to their souls. The final resting place of Mihran Avetisyan, in Gyumri, was also so blessed. 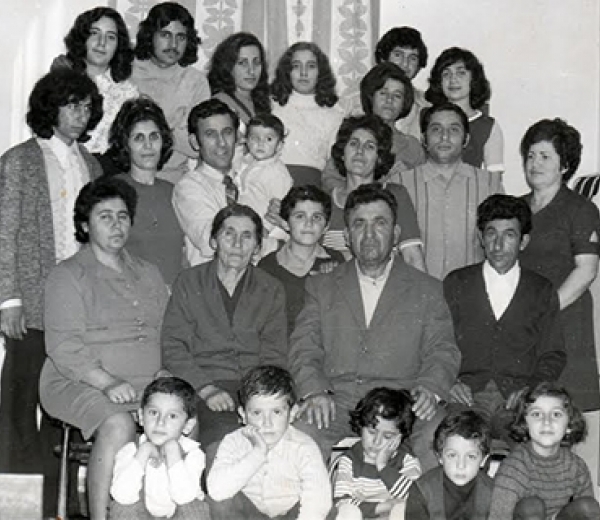 Text:
A sense of longing remained in Mihran’s heart his whole life, his gaze turned toward the other side of the Arax River. He never preached hate, nor was he spiteful. He always remembered the Kurds who had came to their aid. Nevertheless, he taught his children to vigilantly judge and always recognize the person standing before them when making a decision.
“‘To live means to work,’ my grandfather would say. He stood by us all. Despite his age, he made it a point to be the first in the house whenever one of us started any construction work. He’d come early in the mornings and say, ‘Get up, there’s work to be done. It’s already afternoon.’ He loved life so much that he made others live,” Gor remembers.
Roustamgedouk 100 years later
Gor’s eldest son bears the name of his great-grandfather Mihran. One hundred years after the family’s emigration from Roustamgedouk, that village’s mayor received a letter from 22 year-old Mihran. The young man wanted to know if anything Armenian remained in the village, particularly a landmark “white house” in the village center. A quick reply came from the mayor’s office:
“Yes, my parents said there was such a house here back in the day. Today, there are no Armenian traces left in the village. Sorry.”
The story is verified by the 100 LIVES Research Team.
Subtitle:
Armenian painter inspired by his grandfather
Story number:
129
Author:
Meri Musinyan
Header image: 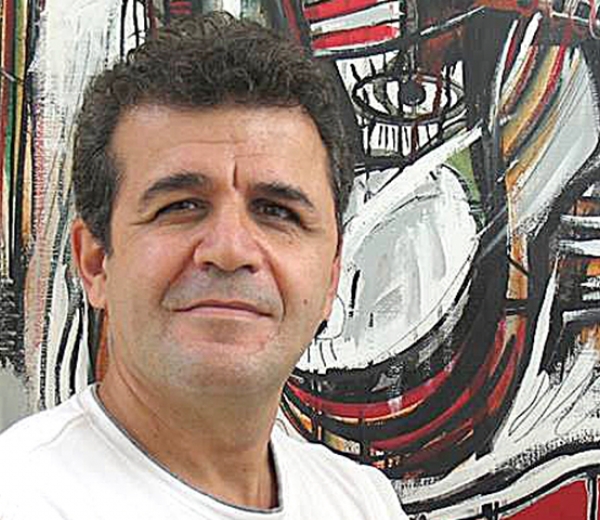