The name “Armani” is a tribute to her mother Arminé and her Armenian roots.

Nora jots down names in Western Armenian: Arminé, Marie, Hagop, Vahram, Berjouhi, Zarouhi, Gousineh, Takouhi, Arousyag, Vazken, trying not to forget anyone and keep a chronological order. These are names of her relatives, all members of her extended family – survivors of the Genocide and their descendants.
Image: 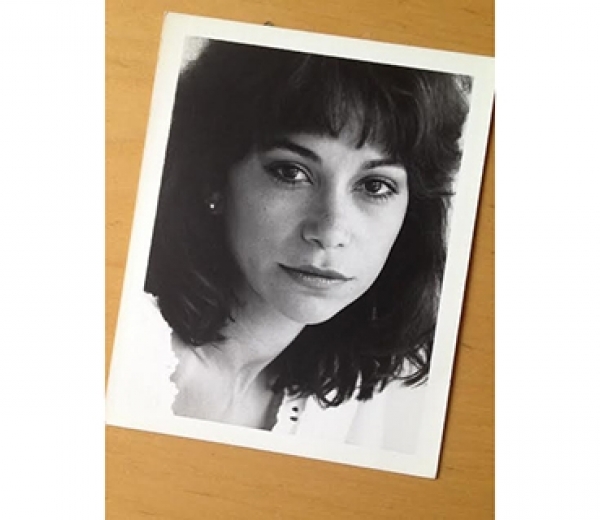 Text:
“The story of my belonging has haunted me endlessly. I often mentally converse with my near and dear ones. It seems to me that we think along the same lines, like what would have happened if our grandparents had not been not deported. We would have been born in our homeland and we would not have dispersed all over the world. Do you know which branch of our family has multiplied the most? Well, the one that immigrated to Armenia! It is undeniable that the motherland is an incomparable source of vitality that creates favorable conditions for procreation regardless of its own difficult circumstances,” says Nora.
The story of Nora Armani’s grandparents begins in distant Kayseri (Gessaria). Her paternal grandparents were Marie Azadian and Sepon Ekserdjian. On her mother’s side, her grandparent’s names were Goussineh Gemidjian and Hagop Basmadjian.
“I’m a third-generation descendant of Genocide survivors. I can’t help but feel that the Genocide has happened to me, it is as though I witnessed all the calamities with my own eyes. In reality, the ones who lost their homeland were not too fond of talking about it. There was a bit of sadness even during their joyful moments. Later on, in my adulthood, I understood that what they were experiencing was homesickness,” Nora believes.
Marie and Sepon
Nora’s paternal grandmother Marie Azadian was born in Kayseri. Marie’s father, Hagop Azadian, was well off. He owned tobacco lands and exported tobacco to the Middle East, specifically to Egypt. At the time, Armenians in Egypt owned the major cigarette factories, like the Eastern Company, Matossian and Ipekian. Before Marie’s birth, Hagop Azadian had three daughters and dreamt of having a son. He had made a vow that if his fourth was a boy, he would baptize him in Jerusalem and donate money equal to the child’s weight in cash. In 1886 their fourth daughter, Marie, was born. Nonetheless, Hagop kept his promise and baptized her in Jerusalem when she was 40 days old.
Image: 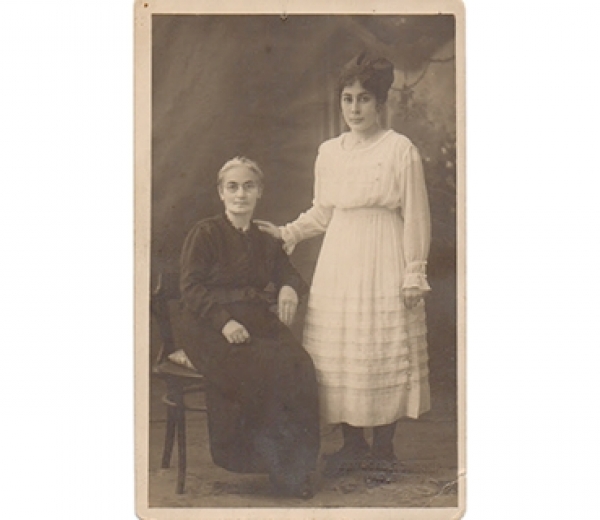 Text:
Hagop Azadian’s wife Verkineh foresaw the dangers looming over Armenians in Turkey. In the beginning of the 1910s, her husband spent most of the year traveling between Egypt and Kayseri. When Hagop once again made his way to Egypt, Verkineh sold their belongings and without a word to her neighbors left for Egypt with her four daughters to be reunited with her husband. As the family reached their final destination, Hagop died of an infection. Verkineh and her four daughters, Zarouhi, Arousyag, Eugenie and Marie Azadian remained in Egypt. The eldest daughter, Zarouhi, was already married in Kayseri and had moved to Egypt together with her husband, Missak Latchinian.
“Each of these names tells a unique story. After 100 years we still evoke these stories and look for an answer as to why they had to become outcasts, why they had to bear the bitter feeling of being a survivor; being the person who stayed alive,” says Nora.
Image: 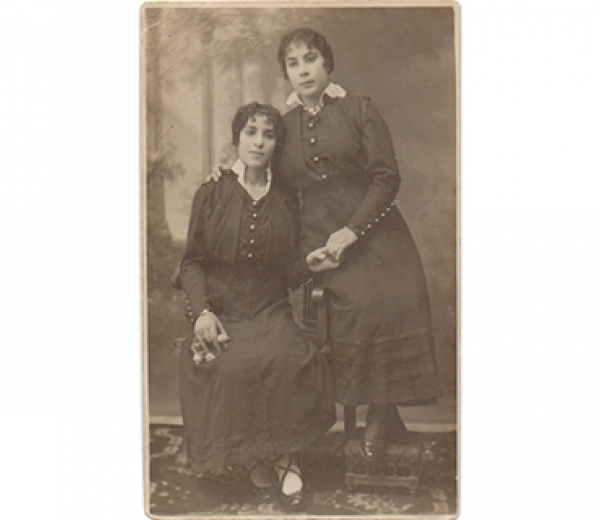 Having left behind their once affluent, comfortable life in distant Kaiseri, the Azadian family tried to thrive in a foreign land by opening a couture atelier. Life improved and the girls were married one by one. Arousyag wed Mihran Zakarian, but unfortunately, she died young. When repatriations to Soviet Armenia began, Arousyag’s husband Mihran Zakarian and their three daughters Takouhi (Aramian), Hasmig (Kotchar) and Armine (Tutundjian) moved to Armenia in 1948. Eugenie married Torkom Boghosian from the state of Seghert (Siirt), and Marie, Nora’s grandmother, married Sepon Ekserdjian from Constantinople in Cairo. 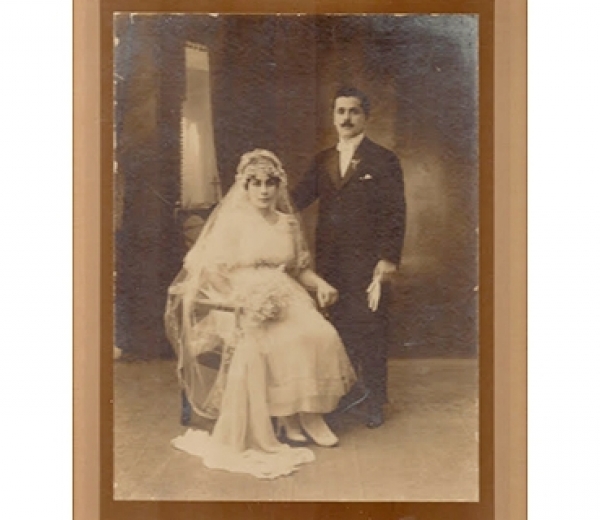 Sepon Ekserdjian, Nora’s grandfather, was a goldsmith and moved from Constantinople to Egypt in 1914. Sepon and Marie were blessed with three sons, Kevork, Akribas and Hagop. Nora’s father Akribas (Varoujan) is the middle child. 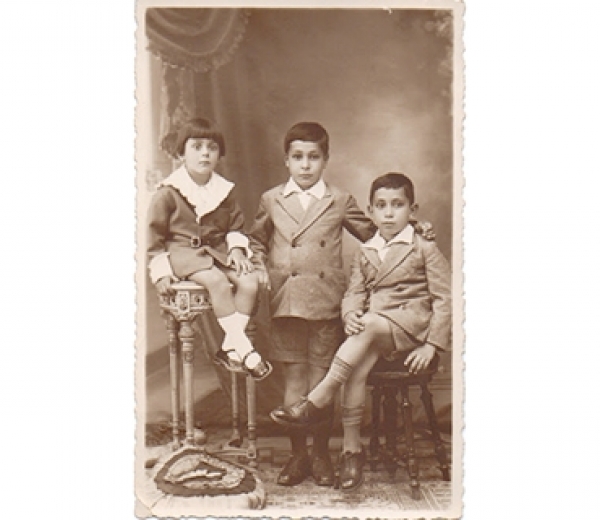 Text:
“Gessaria is a cherished name for me, since my mother Arminé Basmadjian’s parents were also from there. My dream is to visit Gessaria one day. I do not know what I will find there, but at least I’ll look at it with the eyes of my departed kin and will live that sacred encounter in their place,” says Nora.
Goussineh and Hagop
Goussineh Gemidjian and Hagop Basmadjian from Kayseri are the parents of Nora Armani’s mother, Arminé Basmadjian.
Father Ghevont Gemidjian, a renowned and respected priest is grandmother Goussineh’s father and Nora’s great-grandfather. Father Ghevont and his wife had four daughters, all born in Kayseri. Goussineh, born in 1890, was their eldest daughter. In 1915 she was already 25 years old. Her sisters were Azniv, Hranoush and Berjanoush.
The youngest daughter, Berjanoush, was ten years old in 1915, while Goussineh was already married to Hagop Basmadjian, a teacher, and had a new born baby, Vahram.
“Sometimes it seems just unbelievable that they went through all these hardships and were able to muster enough strength and courage to continue living. All my relatives who were born in Egypt could have been born on their lands in Kayseri. Instead, we were all sentenced to exile,” Nora says.
Grandmother Goussineh would often recall their home in Gessaria. She used to tell Nora that every May, the family went up to the mountains to their summerhouse and stayed there until September. She recounted details about their basement, where they hung up basturma (cured pastrami-like meat) to dry and kept plenty of dried fruits and other preserves.
In 1915 the Turks hanged Father Ghevont along with other priests and intellectuals. The family was forced into exile. Goussineh and Hagop were separated from each other. The priest’s wife, her four daughters, and her grandson – Goussineh’s one-year-old Vahram – became refugees. Vahram died during the deportations. Father Ghevont’s wife died as well.
“My grandmother considered their survival a miracle. They wandered the roads of exile for three years, crossed the Deir ez-Zor desert and in 1918 they finally reached Aleppo. My grandmother used to tell a story, somewhat like a vision, where she truly believed God helped her through the incredibly difficult journey,” says Nora, adding that she tells this story in one of her solo shows.
“At some point, as their caravan is passing by the Euphrates River, they are told by the gendarmes that whoever wanted to drink, could walk up to the river. Everybody rushes to the river. Feeble and very frail, my grandmother is so exhausted she can’t run, and she feels she is going to faint. Suddenly, she feels water being poured on her face. She opens her eyes and sees someone dressed in white standing by her, pouring water on her pale face. She cups her hands to hold the water. When she drinks enough and regains consciousness, she raises her head to thank her savior, but there is no one there. It seems to have been an apparition… But my grandmother says her lips were wet and her thirst was quenched. What was that, a miracle from God? My grandmother Goussineh often recalled that incident and believed that they survived the death marches through God’s help,” Nora recounts.
Image: 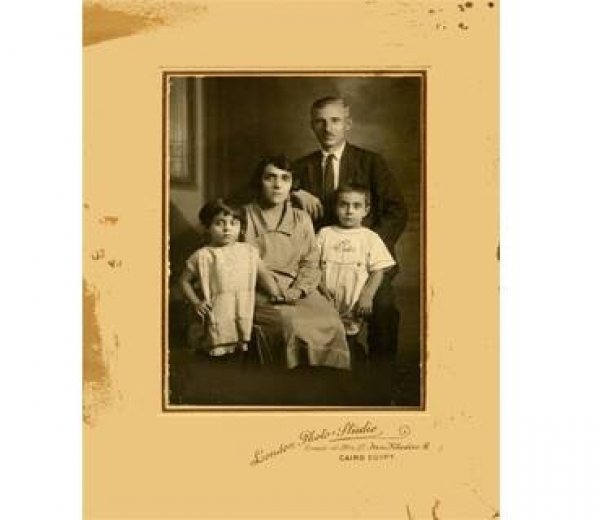 Text:
In 1918, the four sisters arrived in Aleppo. At the train station in Aleppo a huge crowd had gathered, and many people were calling out family names in hopes of finding their surviving relatives in the crowd. All of a sudden, Goussineh heard someone call her name, Basmadjian. Looking up she saw her husband Hagop, who had miraculously survived and ended up in Aleppo. Re-united once again, Goussineh and Hagop were blessed with another son, who they named Vahram after the first one they had lost, followed by Arminé, Nora’s mother. Hagop, Goussineh, their children, and Goussineh’s sisters later moved to Egypt, where they engaged in carpet weaving and repair.
“My grandmother had an interesting collection of books in Egypt, all gathered in a glass-doored bookcase. Some were books she had brought with her from Gessaria. There were a few old editions of the Bible in her library. Today in my home in New York I have a Bible in Turkish written with Armenian letters. It is a relic that has survived from the roads of exile,” says Nora.
Image: 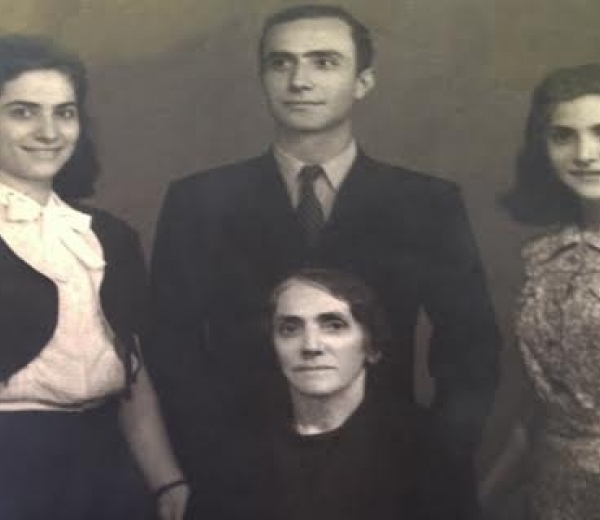 Text:
“My grandmother Goussineh lived to be 90, she saw all her grandchildren and passed away in August 1975. She was a discreet, educated woman who would always attend Sunday service at St. Gregory the Illuminator Church in Cairo, as if longing for the eponymous church she had left behind in Gessaria. She would always sit in the second row on the left. My grandmother knew Turkish perfectly, but would always speak Armenian and insist we speak it too,” remembers Nora. “She would often whisper, ‘geberesice turkler’, meaning ‘damned Turks’, but she never instilled any hatred in us. She used to say that there was a war, the Germans collaborated with the Turks and betrayed the Armenians. She suffered greatly but never preached hatred or revenge.”
Nora’s mother Arminé attended the Kalousdian Armenian School in Cairo, Egypt. She got married to Akribas (Varoujan) Ekserdjian and had two children, Nora and her brother Vazken, who is named after His Holiness Catholicos Vazken I. Vazken Exerjian currently lives in Japan, Nora lives in New York and their father Akribas Ekserdjian lives in Los Angeles. Nora’s mother passed away in Egypt in 1986. From the grandchildren of Father Ghevont and Goussineh Basmadjian, only Nora’s aunt Arpiné is alive today. She is 88 years old and lives in Montreal with her husband Hrair Kupelian. Her children, Sima, Annie and Armen are all in California.
Image: 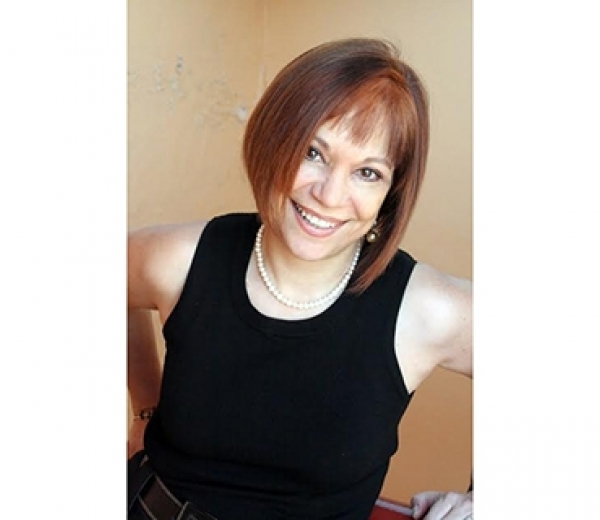 Text:
“One hundred years ago, an unimaginable tragedy happened to us, we can neither erase that from our history nor forget it. Of course we have restitution claims, but we cannot make those the epicenter of our entire essence and existence. I am confident that we can vindicate our past and the memory of our one and a half million victims. As the children of survivors, there is one thing we must do: we must strengthen and develop present-day Armenia, we must not spare the slightest effort in creating a happier and ethical Armenia,” says Nora, adding, “Armenia has a wonderful youth, by supporting the youth, we give them wings. Then our flight will be unstoppable.”
* Images from Nora’s family archive, courtesy of Nora Armani.
The story is verified by the 100 LIVES Research Team.
Subtitle:
Actress and filmmaker: “By supporting the youth, we give them wings”
Story number:
76
Author:
Meri Musinyan
Header image: 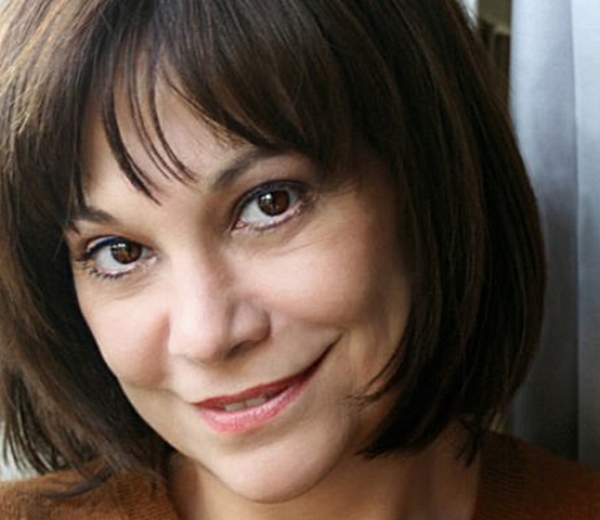