I am deeply invested in helping to revive Western Armenian, a language recently placed on the United Nations’ “endangered languages” list.

I have also written and produced short films and music videos, and was a featured artist in the 2009 Venice Biennale with my video “Sarafian’s Desire.” I produced the wonderful play “Dear Armen” in New York City in 2014 and the OBIE award-winning play “Trouble in Paradise.” I have written one novel, “Speaking French,” and I also write for The New York Times, The Huffington Post and The Beirut Daily Star.
I am currently at work on a second novel, as well as writing, directing and producing several films and musicals. I teach film at New York University and I am very happy that my work with Armenian culture was recently recognized with the 2015 Ellis Island Medal of Honor.
Missak Manouchian and The Army of Crime
My family story is made up of at least two separate tales of the Armenian Genocide. My great-cousin twice removed (my grandfather’s first cousin) was the writer and French revolutionary Missak Manouchian, who was the military commissioner and leader of the FTP-MOI, also known as “l’Armee du Crime” (“The Army of Crime”), one of the most active French Resistance groups in World War II. His story was made into a remarkable film by French director Robert Guedikian in 2009.
Image: 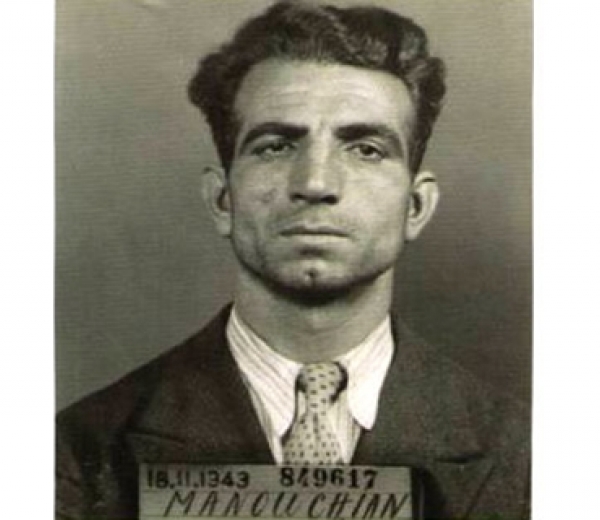 Text:
Born in 1906 in Adiyaman, in the Kharberd vilayet of the Ottoman Empire, he saw much of his immediate family killed during the Armenian Genocide in 1915, but survived by mere chance and managed to escape to Lebanon. He was placed in an orphanage in Jounieh near Beirut and eventually made his way Paris, France, in 1925.
Image: 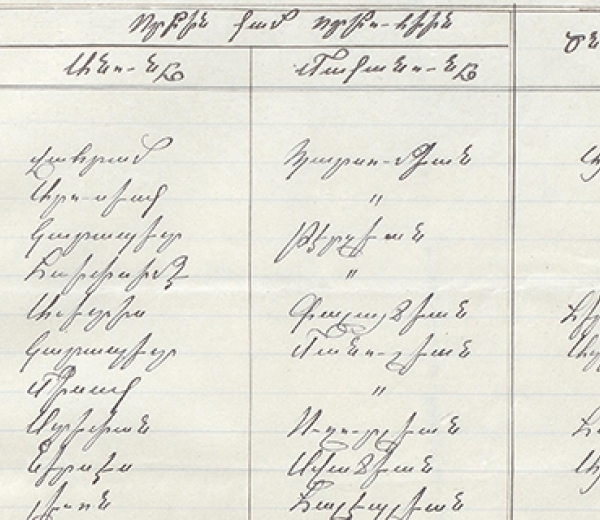 There he married an Armenian girl, Melineh Assadourian, worked as a lathe operator at a Citroën plant and became a member of trade-union and communist movements. He founded several left-wing newspapers and magazines in Western Armenian: Chank (“Effort”), Zangou (named after a river in Armenia) and Mshaguyt (“Culture”). He became a noted poet and was part of the Menk (“We”) school, also known as the Parizi Tbrots or “Paris School” that produced an entire literary and linguistic movement in Western Armenian, although its members – all Armenian Genocide survivors – were living in France at the time.

After the Nazis occupied France, Manouchian was arrested for his underground anti-fascist activity and sent to a concentration camp, but managed to escape and continued his struggle.

He became the leader of the remarkable aforementioned underground resistance group made up of Armenian, French, Polish, Italian and Jewish communists who fought the Nazis.

These brave men and women assassinated Nazi officers, attacked Nazi military barracks and echelons, passed along secret information to the allies and protected Jewish and other refugees. In November 1943 the Germans rounded up members of the group, tortured and eventually executed them by firing squad on February 21, 1944. As they fell, each one is said to have uttered, “Pour la Gloire de la France” (“For the Glory of France).” Two hours before the execution, in a farewell letter to his wife, Manouchian wrote: “I will be dead in a few hours…I do not believe it but I know that I will never see you again…After the war, with the help of friends wishing to commemorate me, publish my poems please…And if you may, please send my regards to Armenia.”
Image: 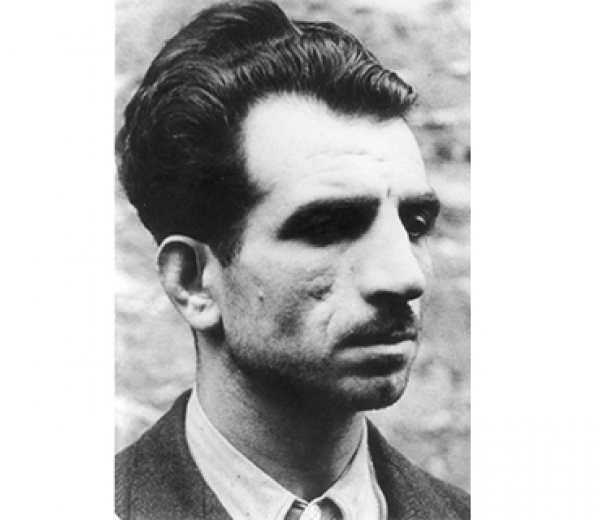 Text:
So central was my cousin’s role that the group is now also known as “Le Groupe Manouchian.” Streets and plazas are named after it, or after Manouchian himself, in Paris (in the 20th and 14th arrondissements), Issy-les-Moulineaux, Marseille and Yerevan. For their service to France and humanity, they were also immortalized in a poem by Louis Aragon called “Strophes pour se Souvenir,” set to music by Leo Ferre.
To say that I am proud that Missak is (even a distant) relative is a mild understatement. He made a difference in the world and he did not let the horrors of what he had experienced in 1915 stop him from moving forward and from brining the Armenian language and culture with him. As they say in Armenian, “Genadsset. To life!”
Bedros Atamian: fedayee, goldsmith, bootlegger
The other story I find fascinating is that of my paternal grandfather Bedros Atamian. Before becoming Atamian, our family name, it turns out, had been changed from Vosgeritchian to Kouyoumdji – the former means “goldsmith” in Armenian and the latter is a Turkish last name meaning “jeweler.” The changes were meant to help the family avoid persecution when the next roundups of Armenians began.
My grandfather Bedros was a peaceful man, a silversmith and businessman who became a fedayi, or freedom fighter, after seeing his family slaughtered by the Young Turkish gendarmes and the Kurdish Hamidiyes. He eventually fled from city to city, making silver cutlery sets for wealthy Turkish families. Although he spoke fluent Turkish as well as Armenian and Kurdish, many of these families must have known that this small man with a famously large nose was, in fact, Armenian.

He eventually made it to Zahleh in the Chouf Mountains in Lebanon. By that time he had made enough money along the way with his silver sets to establish a small “oghi,” or ouzo factory, in Zahleh. From there, he sent for a wife to be brought from an Aleppo orphanage filled with “the remnants of the sword,” Armenian women and children who had no family left. They married and had four beautiful children, all of whom led productive lives in Lebanon and then in the West: my father Georges, a journalist and manager of the Plaza and Saint Regis Hotel in New York; my uncle Dede, a successful banker in Beirut; my stunning red-haired Aunt Maro, who worked for Middle Eastern Airlines for many years, and my Aunt Reine, who was a homemaker and a prototypical Armenian mother. From them I have three cousins: Mikael, Raffi and Bedig.
Image: 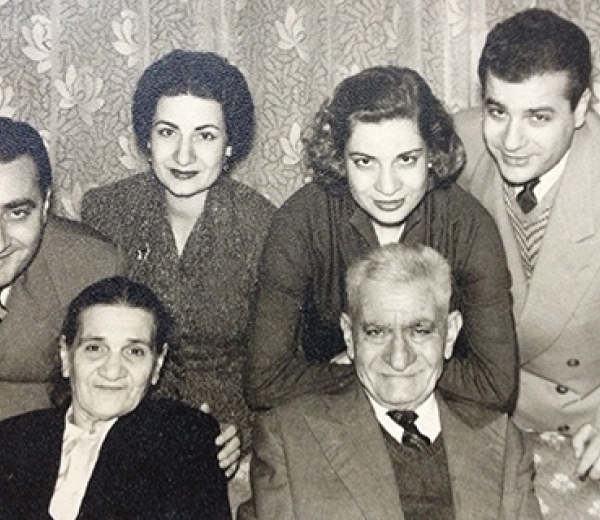 Text:
Thankful and forward-looking
My Aunt Maro once told me a sad story, reminding me of the grandmother character in the “My Big Fat Greek Wedding” movie who has gone mad and runs away occasionally when she thinks the Turks are invading her village again, although she now lives with her family in the comfort of Astoria, Queens. “Your grandmother Vartanoush, who was the sweetest soul, would wake up sometimes in the middle of the night screaming at the top of her lungs because she thought the Turks were coming to kill her family again.”
Image: 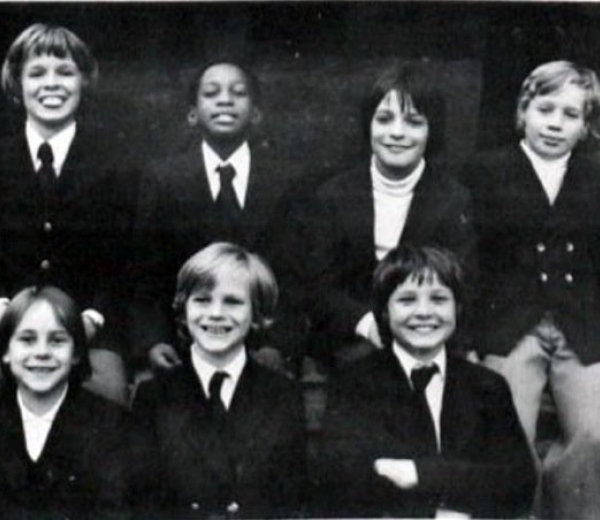 Text:
I am keenly aware of the debt that Turkey owes Armenians, but I am also just as keenly aware that without a few wonderfully righteous Arabs and Turks, who helped my grandfather make the long journey from Adiyaman to Lebanon, none of my family would be here today. So I thank the universe for them and I thank the universe for these strong, wonderful Armenians who have learned to survive over the centuries.
The story is verified by the 100 LIVES Research Team.
Subtitle:
Polymath writer and visual artist traces his ancestry to Missak Manouchian
Story number:
173
Header image: 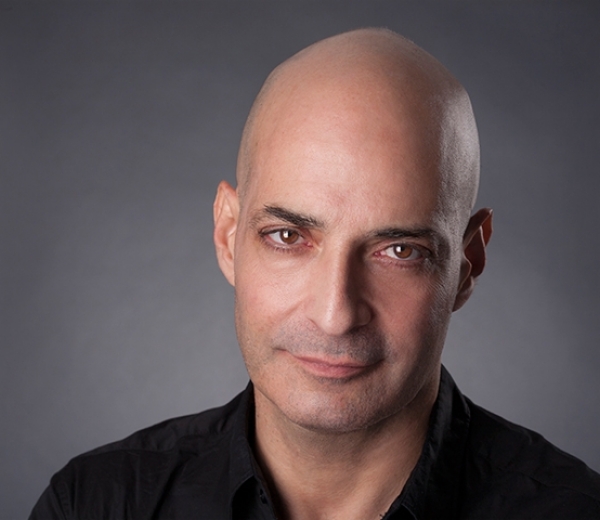