A Note of Salt

The 14th Istanbul Biennale, curated by the renowned Carolyn Christov-Bakargiev, the author of the latest “Documenta,” has taken both European and Asian Istanbul, from the Black Sea to the Sea of Marmara, by storm. In the year that marks the 100th anniversary of the Armenian Genocide, the Armenian theme became one of the exhivition’s core motives. The Armenian projects were supported by the Dilijan Art Initiative, a fund sponsored by Ruben Vardanyan and his wife Veronika Zonabend. The Armenian subtext makes the 14th Istanbul Biennale the most radical gesture in the history of this politically-edgy art event. Anna Tolstova reports from Istanbul.

The epigraph to the biennale, titled “Saltwater: The Theory of Thought Forms,” is a photograph by Francis Alÿs taken on one of Istanbul’s islands: a melancholy view of the sea from behind a half-opened gate that is practically being swallowed up by the waves. Saltwater means “salty” and “that of the sea” — it stands for the salty waters of the Bosphorus and for salty tears, for the city of Istanbul straddling the shores of the Bosphorus, which saw a lot of tears itself.

Official Istanbul doesn’t like to talk about the tears shed by Armenians in 1915 and the Greeks in 1955, but the thoughts of many guerrilla artists draw upon these tears that dissolved in the Bosphorus’ waters. They often take on very relevant form, as even today there are blood and tears being shed on Turkey’s borders.

The theory of thought forms, born at the beginning of the 20th century, came from theosophists Annie Besant and Charles Leadbeater, who believed that reality can be changed with the power of thoughts. Carolyn Christov-Bakargiev seems to share this belief, although she doesn’t rely solely on art, mixing it with content from the scientists, such as — in this case — Darwin, Lacan and Störmer. Still, the line between art and science is vague, as demonstrated by the excellent paintings and diary drawings that were also lab experiments and notes of psychoanalyst and feminist Braha Lichtenberg-Ettinger, on exhibit at the Arter Cultural Center.

The Biennale’s camertone is Francis Alÿs’ video “The Silence of Ani,” shown at the Depo Cultural Center. Among the stage props exhibited around the video is a set of bird calls, pictures from an atlas of birds that used to live at Ani and an antique map of this ancient Armenian capital, the “city of 1001 churches,” once rich and prosperous. It used to compete with Baghdad and Damascus but has been wiped off the face of the earth by time, earthquakes, conquests and the Turkish government’s intentional policy of failing to preserve monuments.

Francis Alÿs once again works, or rather, plays, with local children: scattering around what remains of Ani, they use the bird calls as if trying to get the birds to return to the city. By the end of the film the images disappear, leaving viewers in the darkness with only sound to keep them company.

Carolyn Christon-Bakargiev doesn’t like political posters, and “The Silence of Ani” is a subtle and polysemantic artistic statement. But it’s difficult to avoid interpreting it as a metaphor for the tragedy of Turkish Armenians: their traces are gone but the memory is preserved in whispers and cries, in hushed conversations and oral history.

The saltwater and tears biennale shows that sounds outlive images. Even the opening press conference was turned into a concert, with lovely singing by artists Theaster Gates and Adrián Vilar Rojas. There was also signing at one of the best group exhibitions of the biennale, which took place in the former Greek School of Galata. There, Haig Aivazian, an artist from the Armenian diaspora in Lebanon who was born in Beirut, together with the choir of the Armenian church of St. Trinity in Beyoğlu, performed the smash hit of the Turkish pop star Udi Hrant, an Armenian from Istanbul who miraculously survived the Genocide and turned oud into a jazz instrument. The pop song was performed as a liturgic homophonic chant. This was a hymn to Creolization and Diaspora, just like the other work — Anselm Kiefer-inspired installation of Cairo-born expat and cosmopolitan Anna Boghiguian, who presented a giant ragged sail floating over salty waves to the constant cries of seagulls. Truly, saltwater means waves.

Images, as we see in Palmira today, disappear without a trace, but sound waves travel to the edge of the universe (or at least we’d like to think so). The largest group exhibition of the biennale can be found at the Istanbul Museum of Modern Art. One of the exhibition’s centerpieces is Nikita Kadan’s philosophical installation on the nature of enlightenment: on the upper level we see the destroyed exhibit with stuffed deer and barricade tires strewn about, an allusion to last year’s destruction of the Donetsk Local History Museum. On the level below is a bomb shelter with plank/flower beds, and you can already see green sprouts coming out of the ground. Culture is reproduced in all of its diversity — from the culture of art to the culture of violence. Another biennale venue — a formerly luxurious but now dilapidated Italian villa on the Büyükada Island — is filled with booming drip drop of the audio installation by Susan Philipsz: Marconi supposedly said that each sound that we make still resounds somewhere.

Sound is time and the biennale demands a lot of time: it’s impossible to grasp all of it, stretching as it does from the old town to Beyoğlu, from Kadiköy to Şişli, from the Black Sea coast to the Prince Islands. In the guide to the biennale, the exhibit’s curator snidely comments: “You will spend quite a bit of time on salt water. That is very healthy; salt water helps to heal respiration problems and many other illnesses, as well as calms the nerves.”

The biennale guide is an excellent guide to the city, but the Google maps on its pages are difficult to read. Instead, each page has detailed instructions on how to get to the next point of your journey: take a right, walk 100 meters…These directions sound as if a random passerby was stopped on the street and asked for directions, and then spent a long time explaining the route, expressively using his hands. This is all because sound is more reliable than image, and imagination (the thought forms of the title) is preferable to sight, especially since some of the venues are fictional: or, rather, the venues themselves — such as the Garibaldi House or the French orphanage — exist, but there are no show pieces there other than the spirit of the place.

Carolyn Christov-Bakargiev’s principal Istanbul consultant was Orhan Pamuk: many of the schools, banks, hotels and private homes that became biennale venues along with museums and cultural centers used to be owned by Greeks, Armenians or Italians (or they were built by Italian, Greek and Armenian architects) — and this is obviously no coincidence. In the aforementioned Greek school Michael Rakowitz collects the frottages and moulds of the stuccos of Istanbul’s Art Nouveau buildings: the decorations were all made in one famous Armenian workshop. The installation is supplemented with a collection of dog bones from the Sivriada Island: back in 1910, all of Istanbul’s stray dogs were taken to this deserted island to die of hunger, eating each other. This dark episode from history is seen today as the prologue to the Armenian Genocide. The invisible underwater installation of Pierre Huyghe near the Sivriada shore is dedicated to the memory of Istanbul dogs.

Orhan Pamuk, who’s also taking part in the biennale as an artist — with his adolescent drawings (he planned to become a painter) and the Museum of Innocence installation, which exhibits the paintings of the Armenian genius Arshile Gorky — took the curator to the island of his childhood, Büyükada. Büyükada Island, full of mansions that were once built by rich Greeks, Armenians and Jews, is now populated with ghosts of the past, the most famous of which is the ghost of Leo Trotsky, who spent the first four years of his exile here. The ghost is summoned from oblivion by William Kentridge and Adrián Vilar Rojas. The island’s most luxurious hotel, Splendid Palace, is used for the demonstration of Kentridge’s video installation “O Sentimental Machine,” using the room doors as screens: the newsreel shots are mixed with vaudeville in the style of Abram oom and Dziga Vertov, where Kentridge is presented as a fiery orator of the permanent revolution, whose head gradually turns into a loudspeaker spewing out slogans. Adrián Vilar Rojas takes us directly to Trotsky’s house: after walking through the remains of the villa and the debris of the garden, we go down to the sea in order to see the chimeras — the gigantic statues of porcelain-white animals – step out of the waves, carrying on their backs the bodies of dead brethren along with the burden of natural and cultural trash. The sea provides the natural and eternal accompaniment to this magnificent, surrealistic and, alas, very temporary picture.

This article originally appeared in the Kommersant newspaper in Russian. 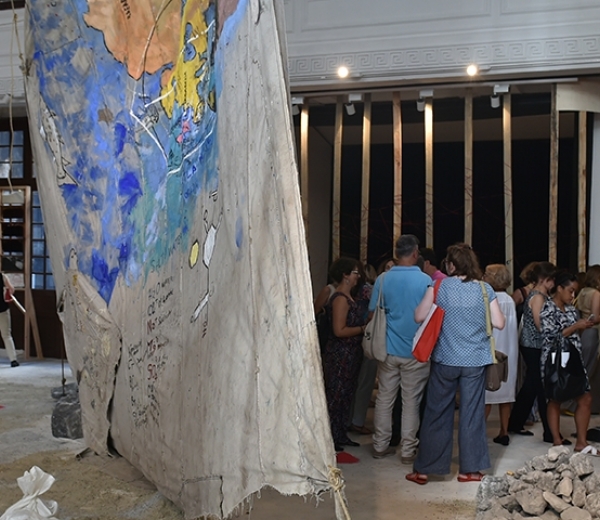