A world-famous microbiologist, Professor Garabed Antranikian, Ph.D., is president of the Hamburg University of Technology in Germany’s eponymous northern city. He is a recipient of multiple awards, the most coveted European environmental prize given by the German Environment Foundation among them. A descendant of Armenian Genocide survivors, he conducts research into microorganisms capable of withstanding extreme conditions.

Professor Antranikian is well known for helping to develop the university and introducing many new teaching methods. “I always say IQ is important, but EQ, emotional intelligence, is even more important. You need both to be successful. In Germany it’s common practice for students to specialize in one subject, but here at TUHH they learn more than that, for example social competence, psychology, sociology and languages…Knowledge alone does not get us anywhere,” he believes.

At birth, his chances of success were slim to non-existent. “In Jordan there used to be regular public schools and a few private schools, including an English school. If you didn’t go to a good school, you couldn’t go to university. I knew that I had to study no matter what and that an education at an English school was a requirement, but I also knew how expensive it was,” he recalls. One day he asked his mother, who worked as a tailor at the British Embassy, to get the ambassador’s wife Lady Parker to help send him to the English school. Garabed was allowed to attend free of charge.

After graduation only a few applicants from Jordan were admitted to the American University of Beirut, the best elite university in the Middle East. Antranikian was one of just three students admitted from the English school. With his parents’ meager savings in his pocket, he went to Lebanon at the age of 18. Tuition was only partly covered by scholarships, forcing him to take many student jobs, often at the expense of a good night’s sleep.

At that time in the 1970s, Lebanon was plagued by civil war. Antranikian was finishing up a graduate program in biology and looking forward to a doctorate in the United States when the situation spun out of control. “There were armed people everywhere and they were shooting. They were on campus, too,” he recalls. “The American Embassy was maybe a bit more than half a mile from the campus. I tried to run there. Because of the bullets flying everywhere I ran all over the place, zigzagging and hiding behind trees. After my third attempt I gave up and looked around to see what was close.” Only a few steps away from him, between the thick tree trunks, he spotted the German Embassy. He snuck in. Both a student visa and a scholarship were granted to him swiftly, and he enrolled at Georg-August University of Göttingen at the age of 24, earning a doctorate at the Faculty of Microbiology and Genetics. His unusual story landed him on the pages of the Göttinger Zeitung, a regional newspaper.

When extreme is good

Today, in close cooperation with Japanese scientists, his team of researchers is trying to find robust microorganisms in boiling hot springs. The enzymes of microorganisms that need extreme conditions to survive can be used as components of laundry detergents, in the pharmaceutical and chemical industries. “The important thing is to break new ground – similarly to what we do in all areas of life. A given standard has never produced anything new. When we try out unusual and innovative ways, it’s not a bad thing, is it?” he says playfully. “It’s necessary for the industry to discharge as few pollutants as possible and develop more efficient and ecological processes. It’s our stated long-term goal to devise a biological basis for everything that’s still produced chemically, thus avoiding pollutants in the first place.” The technology Antranikian is working on can be applied anywhere from the leather industry to cosmetics to ocean cleanup.

Antranikian remains a visionary. “One vision for the future is the use of renewable resources. Oil and gas can be replaced by renewable resources such as biomass, unused vegetable matter or wood. By-products and waste could be recycled into high-quality products by applying enzymes and microorganisms. This can be done in the next 10 or 20 years: all we need to do is find new bacteria in nature. Today we know maybe one percent of all bacteria that exist. Much is unchartered territory.”

Garabed Antranikian has been conducting research at hot springs, sulfurous volcanoes, saline lakes and in the Arctic ice for over 30 years. This year, too, he is resolved to make new discoveries. 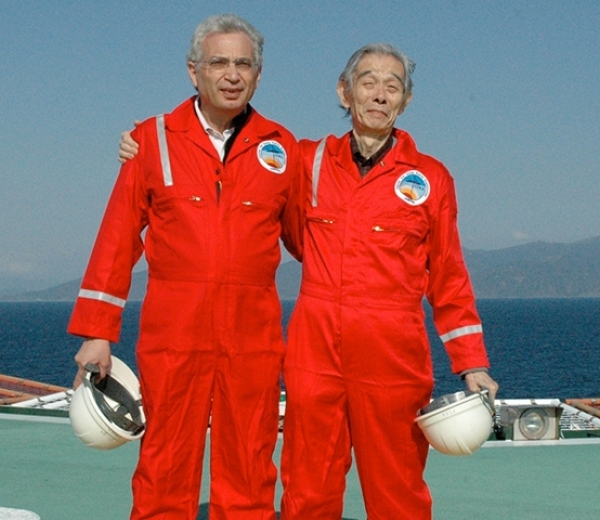