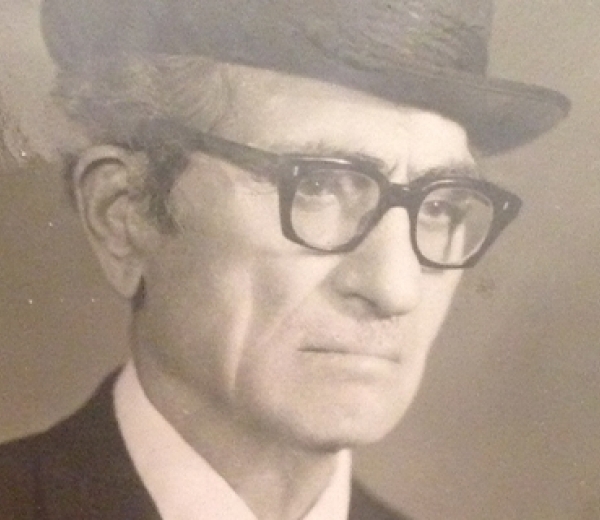 Text:
In mid-1915, with the aim of wiping out the Armenians, the Ottoman Empire incited the Kurdish aghas and beks to conduct unexpected raids.
“The scene when the men and women were being separated was heart-wrenching and sad. One could hear the wails of the women and cries of the children all around. At night in the dark, many lost their relatives. Others toppled into the ravines after losing their footing from being jostled by the crowds while passing through stony and treacherous passes. Others shrieked and cried out after their three or four-year-old kids went missing. Others mourned their dead sons. Under the watch of the gendarmes, the women, children and the elderly were shoved and beaten, like animals, on the banks of the Mourat River (Aradzani, Eastern Euphrates). Eleven members of our family, women and children, were there – including my two sisters aged eight and ten. People were killed with machine gunfire and the bodies tossed into the river. Some threw themselves into the river,” writes Ghoukas Hovhannisyan in his memoirs.
Fifteen-year-old Ghoukas was in a group of men taken to excavate the areas around the homes of wealthy Mush Armenians; they searched for gold and other valuables. Telou Hasan, an armed Kurd, approached Krikor, Ghoukas’s uncle. As an acquaintance, the Kurd said, “The pardon is a lie and your surrendering is pointless. They will kill you all. Save yourselves.” Upon Krikor’s order, Ghoukas and his cousin Samson fled. They miraculously escaped several encounters with the gendarmes during their flight. Overcoming famine and thirst, deeply saddened by the news of their families’ murders, they somehow survived. When the Russian Army was stationed in Mush, the boys decided to go there. On the way, Samson fell ill and the Kurds captured Ghoukas, who didn’t want to be separated from his only surviving relative. Samson urged Ghoukas to leave him behind, saying, “Leave me here and go. Maybe you will survive. Let at least one person from our home escape, so that the family hearth remains ablaze.”
At the home of Kurdish Dazo
Khalut, a Kurd who regarded Sharo’s family with hostility, was part of the group of Kurds that seized Ghoukas. Khalut took Ghoukas to his home where his father, Ghazo, made Ghoukas his servant and, because Armenians were proficient at raising animals, also made him tend to his herd. While Khalut was engaged in pillage, their two cows had become skin and bones. Ghoukas explains, “They prepared a bed for me in one corner of the shed. They were poor and had two cows. I had to fatten up those cows in order to live.”
“My past was tragic, my present full of death risks and my future forlorn. But I lived. Khalut didn’t like me and beat me at every opportunity. I constantly thought of leaving that place of hellish death uninjured,” recounts Ghoukas Hovhannisyan. One day, he was able to escape.
Image: 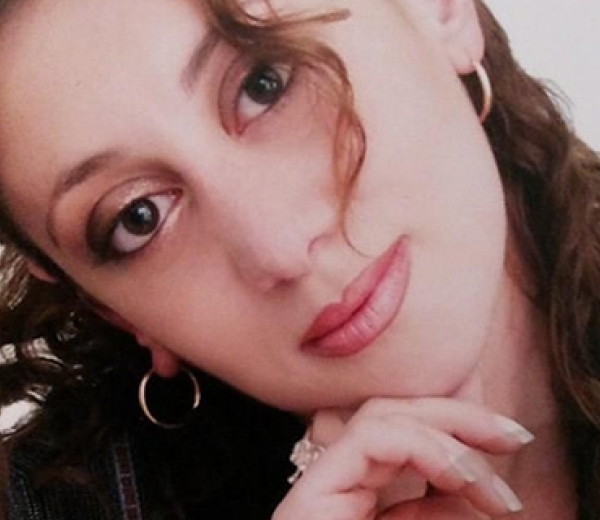 “My grandfather overcame numerous difficulties during this flight. One time, he escaped death by hiding in a sack of wheat. He must have had some inner strength that forced him to resist, to live and maintain the family name,” says Marina, who frequently used to sit with her grandfather near the walnut tree. “I was only eight. Sometimes my grandfather would relate some things. Now, I think that everything was quite serious to be telling a child. Perhaps, making me out to be him when small, he was talking with himself, remembering and thinking.”

Freedom
Fleeing from Ghazo’s house in early June 1916, Ghoukas reached Mush alone. “I met the Russian soldiers. They gave me bread. They gave me a change of clothes and questioned me: where did I come from and where was my family. I said that there were 27 in my family and that all had been killed. Only I…..and I started to cry my eyes out,” Ghoukas writes in his memoirs. Entering Mush, he met his uncle Krikor, who was living in the two-story house of a wealthy Turk. The owners had left after the Russians arrived. Ghoukas went to live with Krikor.
Sometime later, they started to gather up the orphans, Ghoukas included. The orphans were taken to Khnous, Kars, and then Alexandropol (Gyumri)). “I was in the orphanage by December. It was called the 5th or the Sasoun Orphanage, located opposite the Holy Savior Church.”
While in the orphanage, Ghoukas mets General Andranik. He tried, unsuccessfully, to continue his education in Tbilisi or Etchmiadzin, but took a job at the Hayastan newspaper as a laborer.
“He was very proud of meeting General Andranik. He constantly talked about it and repeated to us the advice the general had given him: ‘In this world, the pitiable and the weak cannot survive. They will be swallowed by those who are unjust and powerful’,” recounts Marina.
“From July 21, 1915 until March 10, 1916, I was subjected to terrible torment and suffering. Hungry and without shelter, I wandered the forests and valleys, sometimes with others or alone. Finally, under the supervision of the Turkish gendarmes and enslaved by the Kurds, I witnessed the murder of innocents, the unburied and tortured corpses, the piles of skeletons of men, women and children or of those newly butchered. In Sasoun, in the forests and dales of Antog, Gelyesan and Grishig, in the gorge of Barbar and all over, it was common to stumble upon skeletons or tortured people and sometimes the bodies of those newly murdered. I saw the flames burning Armenian villagers in their homes in Souloukh. Now it is impossible to describe those horrific images. But I have written down those real events and my impressions to the best of my ability.” This is how Ghoukas Hovhannisyan from Sasoun sums up his memoirs.
Image: 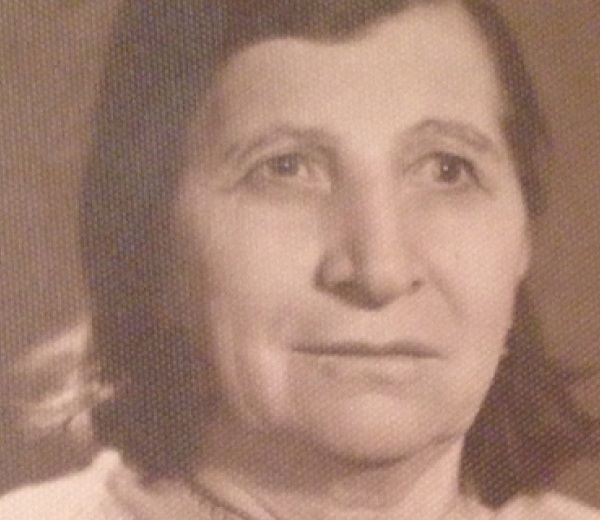 Text:
Later on, Ghoukas married Aghavani Gevoryan, the orphaned granddaughter of Hazgeh Mgrdich agha of the Manazgerd Citadel of Moush. The couple would have seven children, 15 grandchildren and many great-grandchildren. Ghoukas graduated from high school and university and received several top government posts.
The walnut tree planted at the summerhouse was Ghoukas’s resting place, a witness to his longing and memoirs. It reminded him of his native village, of his youth, of his family, of his sisters and brothers… and of their loss. It was under that walnut tree that 86 year-old Ghoukas suffered a heart attack and passed away.
In 1987, one year after leaving this world, the final wish of Ghoukas Hovhannisyan from Sasoun was realized. His memoir, “Sasoun in Flames,” was published.
The story is verified by the 100 LIVES Research Team.
Cover image: wardens of the Gyumri orphanage, Ghoukas Hovhannisyan in third row, sixth from the right.
Subtitle:
Armenian composer remembers her grandfather from Sasoun
Story number:
65
Author:
Aghavni Yeghiazaryan
Header image: 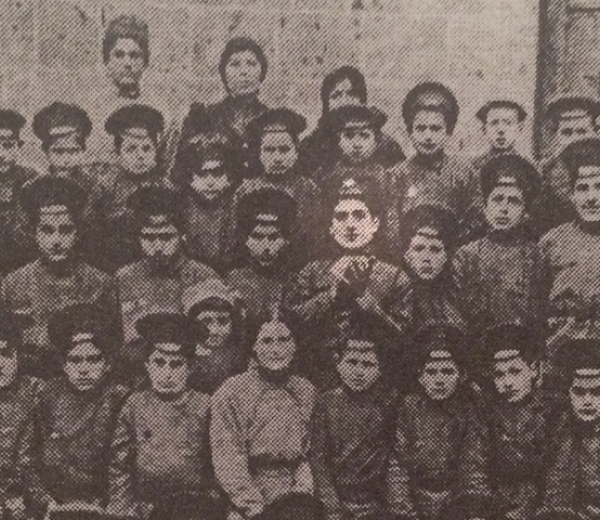