One in a Million

The civil war that broke out between the Sudanese government and Sudan People’s Liberation Movement in spring 2011 resulted in complete isolation of Sudan’s South Kordofan Province. Its inhabitants – the “hill people,” who have lived in the Nuba Mountains for centuries – have lost all access to humanitarian aid. American doctor Tom Catena found himself in the epicenter of the conflict, though not accidentally. 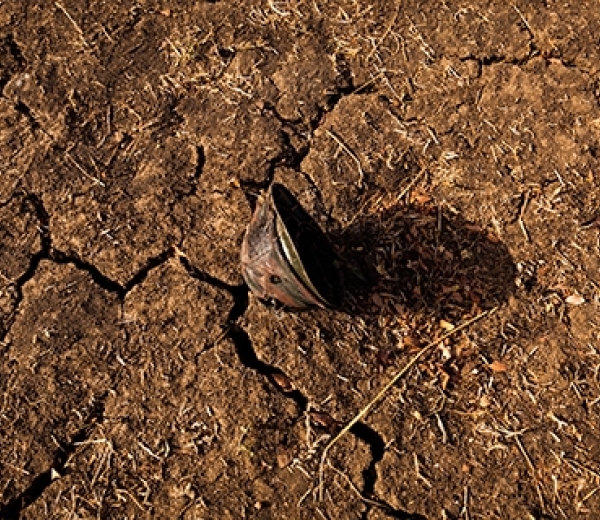 Text:
“It was peaceful here when I arrived. I got to know the local people and I loved them… I heard about hardships they’ve been through for the past 30 years. These people really have an iron resolve. I was gradually introduced to this life: what it’s like to live in a war zone, what it’s like to live with risk and how to function in that setup. A lot of it was learned from people here, watching their example, seeing how they deal with things. And it’s really become very normal,” says Tom Catena, admitting that his conscience would have been heavy had he, like many others, left the hospital when the conflict began.
The sense of duty
New Yorker Tom Catena has been living in this region of an undefined status for eight years now. The locals are waging war against the Republic of Sudan, but aren’t willing to join the Republic of South Sudan. Sudanese President Omar Hassan Al-Bashir, who has been deemed a war criminal by the International Criminal Court for alleged war crimes and Genocide in Darfur, uses cluster weapons against the Nuban people and prohibits any international humanitarian aid from being delivered to the region. The international humanitarian community is concerned that South Kordofan could be the “next Darfur.”
When war first broke out in the area the Catholic mission organization that supported Tom Catena tried to evacuate him, but he insisted on staying because the region needs him.

He believes it is his “duty as a Christian and a human being to help others.”

He says time has come for him to give back because he had everything from the moment he was born – a loving family, a great education. It is his sense on duty that has kept him in Kordofan for so long: “How can I give up when I see my patients suffering?” he asks.
Kordofan is not the first African region Tom has worked in: he spent 16 years treating patients in the northern part of Kenya. When he learned that a local bishop was going to build a hospital in the city of Gidel in Kordofan he moved there to serve the Nuban people, who live in the mountains without electricity, tap water, telephone lines or the needed medical equipment. “Doctor Tom,” as the locals affectionately call him, sometimes even comparing him to Jesus Christ, does everything – treats victims of bombings and explosions, performs surgeries, delivers babies and trains his staff.
Image: 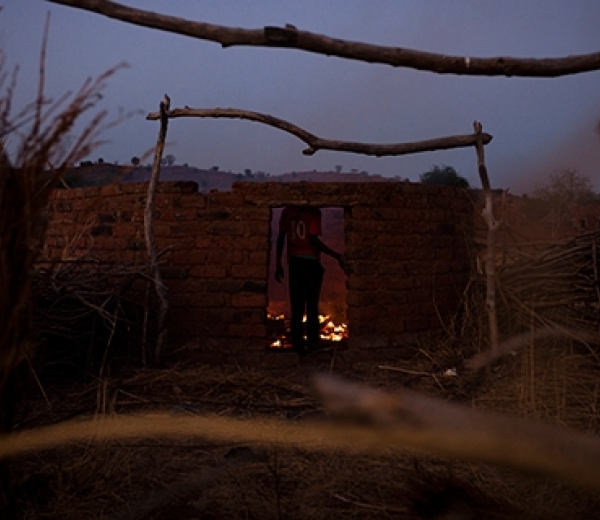 Text:
The local people don’t trust modern-day medicine too much: elder women in the family would first attempt healing rituals and only then ask doctor Tom for help. Catena himself has donated blood multiple times, but realized he would weaken if he were to do it too often.
The only doctor at the 435-bed hospital serves half a million people and works 24 hours a day, ignoring the grave danger posed by bombs falling from the sky. “We work and we run for shafts the moment warplanes appear. There are shafts everywhere around the hospital. People in Nuba do the same,” Tom says. The hospital has been low on resources since the day it first opened, but medical care was still provided to those injured in the war in Darfur and people who migrated to Gidel from Sudan’s central and southern regions. Catena caught malaria two times in the first few months at the hospital and lost 50 pounds.
Catman on defense
Doctor Tom has only left his post twice since 2008. He last visited his parents Gene and Nancy in New York on Thanksgiving Day in 2014. In December of the same year, the USA National Football Foundation awarded Tom a gold medal – he played defense on his college team while studying at Brown University. He even had a nickname: Catman. “If you mix Mother Teresa with Mean Joe Green [former all-pro American football player], you’d get Catman, who represents everything that an athlete student ought to have,” says Tom’s teammate George Riley.
Besides being a successful athlete, Tom Catena was awarded a Roads scholarship for outstanding achievements in architectural engineering. After getting a degree in architectural engineering from Brown, he decided to attend medical school at Duke University. After four years at Duke he left for Kenya for the first time, where he decided to devote his life to treating people. “Only here I understood what real medicine is,” he says.
“We should learn hospitality from the Nuba ‘hill people’,” he says. “Knock on any door and they’ll invite you in and do everything to make you feel home.”

Doctor Tom also learned fortitude and “endless bravery that you wouldn’t expect from these people.”

“People here don’t complain, they don’t feel bitter toward the government or others,” he says, remembering the children who fell victim to the Sudanese government’s bombings a year ago and their brave mother. While running away from the bombings at 4 a.m. three out of the nine children burned to death in the shafts, and Tom couldn’t save the lives of the other three from the remaining six kids. “It’s hard to describe how valiantly their mother faced the pain of the tragedy,” Catena remembers. “She just continued to take care of the children who survived. People are very defiant here.”
Image: 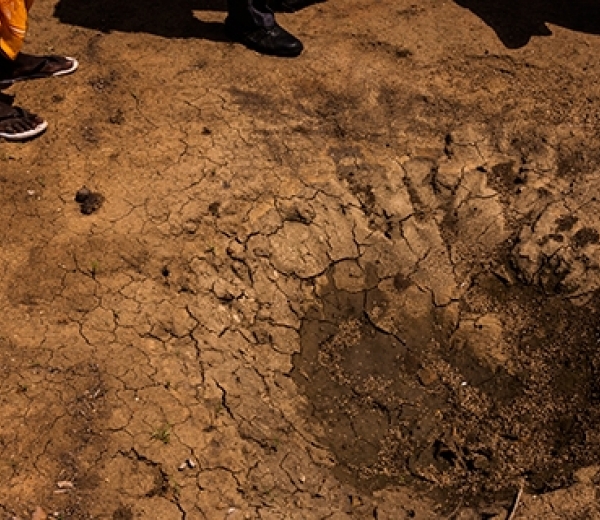 Text:
While doctor Tom is inspired by the “iron will” of the locals and sanctifications of st. Francis of Assisi, thousands of humanitarians and doctors from all over the world write to him offering to help. The doctor inspired by his patients has become an inspiration himself.

He is confident that everyone contributes to the fight against evil in his or her own way: some talk to political leaders, others give money, but it’s crucial for everyone not to lose heart.

“Despair is one of the biggest enemies of mankind. The second you lose hope, you lose everything. And if there’s hope – even a small beam of it – people keep going,” he says.
On the bright side
Tom himself hopes for a bright future and believes that “there is a counterweight to the evil and tragedies that surround us all over the world” and that there are people who do more than him. “We need to focus on the bright side and people who work tirelessly to change our word,” he adds. Finishing construction of an orphanage tops his wish list. The groundwork was laid five years ago, but it wasn’t finished because of war. Doctor Tom hasn’t forgotten about the project.
The “hill people” also remain optimistic as they cling on in the face of cruelty. They seek and find glimmers of hope. As doctor Tom says, “We need hope, it’s in human nature.”
Image: 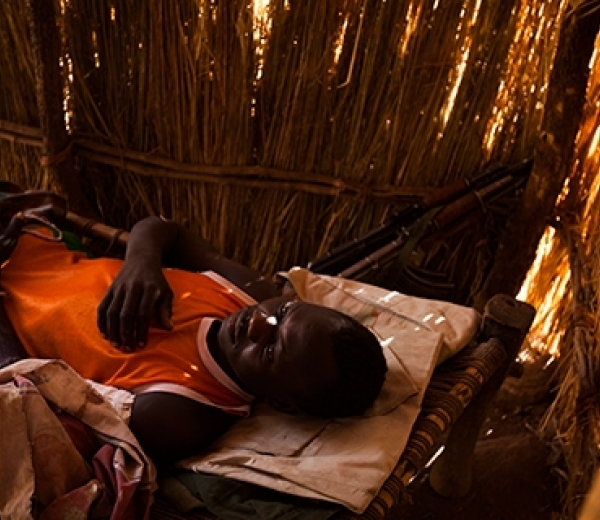 Text:
Tom Catena is modest when it comes to accepting honors and awards, such as his inclusion in Time magazine’s “100 most influential people” list. He says awards serve their purpose if they “tell the world about the disastrous situation in Nuba and the everyday work of the local church and people, instead of introducing me as an individual.”
Faith means a lot to Catena. He believes that all people are connected regardless of race and religion: “I think we are interconnected as human beings; there’s some interconnection no matter what your race or religion. From my perspective, we are all children of God, whether we’re Christian, or Muslim, or atheist, or whatever. And we do have an obligation to look after our brothers. Every single person can make a contribution, somehow.”

Dr. Tom Catena was a finalist for the inaugural Aurora Prize for Awakening Humanity. On behalf of the survivors of the Armenian Genocide and in gratitude to their saviors, the annual Aurora Prize aims to raise public consciousness about atrocities occurring around the world and reward those working to address these major issues in a real and substantial manner. The Prize is awarded annually on April 24 in Yerevan, Armenia.
Subtitle:
Tom Catena is the only resident physician in South Kordofan
Author:
Aghavni Yeghiazaryan
Header image: 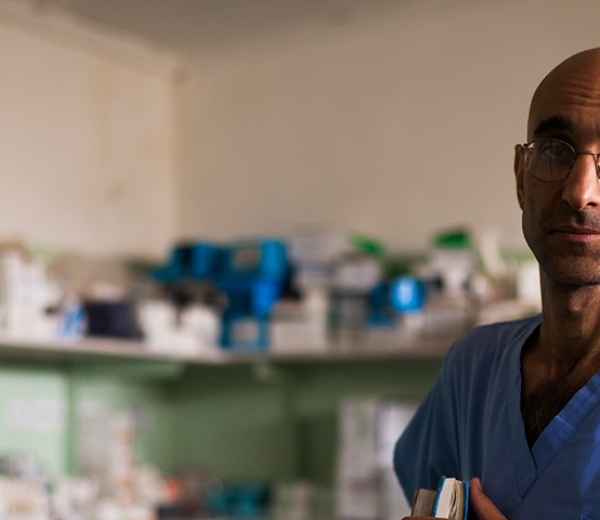