Building a Bridge of Hope

Born in a small village in Sinjar, Iraq, Mirza Dinnayi Mirza Dinnayi comes from a well-respected Yazidi family. His father Hassan Ali Agha was chief of the Dinnayi Yazidi tribe. Dinnayi was in high school when he started writing stories about Yazidis and the persecution they faced. After graduation, driven by his intention to help his community, he enrolled in medical school and joined a student group in Mosul that protested Iraq’s political regime. In 1992, concerned for his safety, Dinnayi was forced to flee to Iraqi Kurdistan. During the Iraqi Kurdish Civil War, he sought asylum in Germany where he became a prominent member of the Yazidi community. After the fall of Saddam Hussein’s regime, Mirza Dinnayi, became, for about a year, Advisor for Minority Affairs to Iraqi President Jalal Talabani.

Everything changed on August 14, 2007, when suicide bombers detonated four trucks filled with explosives in a coordinated attack on two Yazidi towns near Mosul in Iraq. Yazidi communities everywhere were shaken to the core. Mirza Dinnayi raised funds for the victims. “I visited the hospitals and saw the many injured children. I also saw that there was no infrastructure, no real medical treatment for those children, and I said, I have to do something.”

He asked a friend working for the Neue Osnabrücker Zeitung newspaper to publish a call for help. As a result, two German hospitals said they would treat those children for free if they could be brought to Germany. That proved to be a real challenge. Many of the children came from poor families, but that wasn’t all. They also didn’t have passports or any other form of identification.

Dinnayi called the German Embassy in Baghdad and explained his predicament. While the Iraqi government was preparing the passports and the German Embassy was ready to issue visas as soon as some form of identification was provided, Dinnayi was confined to his hotel, unable to leave due to the fighting in the city. It was only the children who received visas – no parents were allowed to accompany them. But Dinnayi remained unfazed. He took the children to Erbil, Kurdistan, to board a charter flight – only to find out that there would be no flights to Germany that day. It was a terrible blow. “The children were crying. Their families said, “You took our children from the hospital and now they will die!” But I told them – I promise you, even if I go by foot, I will get these children out of Iraq, to Germany.”

Next day they arrived in Istanbul, which was the only one available flight destination, but faced another hurdle – the airline refused to allow the children to board the flight to Düsseldorf without medical equipment. Exasperated, Dinnayi threatened to call CNN and the BBC and have an impromptu press conference for the Yazidi victims who “the Turkish company doesn’t want to be saved” right at the Atatürk Airport. It worked. The airport authorities finally gave in, and the group was allowed to board the flight to Germany. All the children received treatment and safely returned to their families in Iraq. 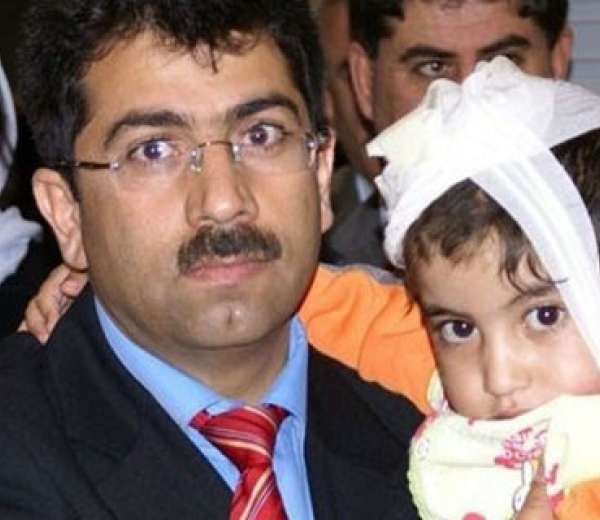 With the first mission a success, it was clear a project like that was desperately needed. At the time there were no German NGOs working with Iraqi children, so Dinnayi and his German friends decided to launch a new organization that would fly victims of all ethnicities and religions from Iraq to Germany for treatment. That is how Luftbrücke Irak, or Air Bridge Iraq, came to be. “After WWII there was an airbridge to Berlin to bring in humanitarian aid, called Luftbrücke Berlin. We said, we will name ours Luftbrücke Irak,” explains Dinnayi.

All staff were volunteers and the hospitals had agreed to treat the children for free, but the NGO still needed to raise money for travel expenses. They started small, collecting enough funds to bring one or two children at a time, but when he was waiting for his flight in Sulaymaniyah, Kurdistan, Dinnayi was approached by a man surprised to see such a group of children, some of them severely injured. Upon learning about Luftbrücke Irak, the stranger showed unexpected kindness. He offered as many free roundtrip tickets as needed on charter flights he managed to Germany, as long as Dinnayi called him in advance to reserve the seats. Thanks to the generosity of strangers, private case-by-case donors and a committed staff, from 2007 till 2014 the NGO helped 150 children and young women.

In early August 2014, as ISIS overtook Sinjar, terrified Yazidis fled to the Sinjar Mountains to escape atrocities. Several activists, including Dinnayi, convinced the Iraqi Prime Minister to send helicopters to help them. Since the pilots were unfamiliar with the terrain, Dinnayi volunteered to accompany them. Overall, Iraqi aviation managed to save almost 5,000 people during those raids, but the horrors he saw in the Sinjar Mountains haunt Mirza Dinnayi to this day. “Every day we had 3-4 missions to bring food and water and to evacuate children and women to Kurdistan. I will never forget those images. I cried every day,” Dinnayi recalls.

One story in particular is forever embedded in his memory. A young man was so desperate to escape he jumped onto the helicopter during takeoff but couldn’t hold on and plunged to his death. It is hard for Dinnayi to talk about such loss of innocent lives. “What sin did he commit that he had to die that way?” he asks.

The risk was real for everyone involved. Iraqi aviation was flying Mi-17s, old Soviet helicopters, almost always overloaded and flying over territories controlled by ISIS, so it was only a matter of time before luck ran out. It finally did on August 12, 2014: the craft Dinnayi was in crashed in the mountains soon after takeoff, killing the pilot and injuring several passengers. “I couldn’t breathe. I saw my life play before my eyes. That day was my son’s birthday. And I said, God, I hope to die tomorrow, but not on my son’s birthday,” recalls Mirza Dinnayi. 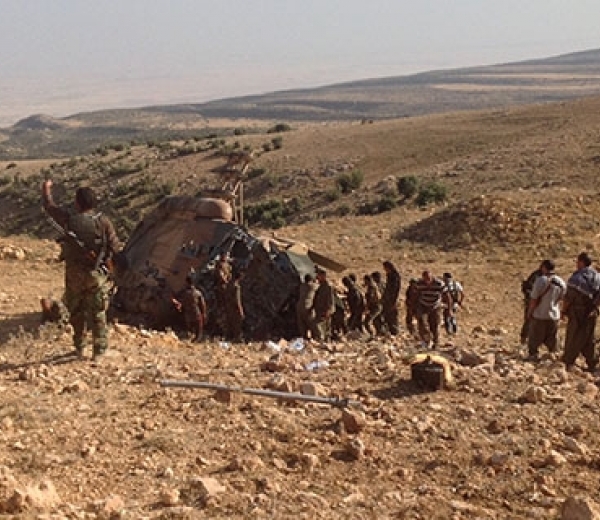 With a broken leg and broken ribs, he was now the one to return to Germany for treatment. After a short hospital stay and still in a wheelchair, he flew back to speak to Yazidis living in the Khanke refugee camp, where girls and women rescued from ISIS captivity were facing another nightmare – banishment. “Yazidis are a closed community. If a Yazidi girl gets married to or has sexual contact with someone from another community, she is no longer Yazidi,” explains Dinnayi. He knew those women needed his help, so he immediately got to work.

A series of meetings with the religious council was arranged, and soon the spiritual leader of the Yazidis Baba Sheikh announced that all women saved from ISIS were welcome in the Yazidi community. But the issue of psychological rehabilitation remained. The trauma sustained by women rescued from sexual slavery was unprecedented. Subjected to extreme brutality, they were often resold several times. Survivors suffered from severe depression, anxiety, social withdrawal, suicidal thoughts and insomnia, but there weren’t enough medical professionals to help the victims recover.

Dinnayi’s adoptive homeland, Germany, came to the rescue again. The Prime Minister of the German state of Baden-Württemberg agreed to take in more than 1000 women and children. The candidates were interviewed first by Mirza Dinnayi then by a trained specialist who performed a psychological assessment. “I prepared the cases. Throughout the project, I interviewed 1300 women and children, and in the first six weeks I interviewed about 200. Every day I was listening to the stories of rape, forced conversion to Islam, torture, beatings. I was deeply traumatized. I can’t forget them. Even now, I remember all the names of those women,” says Dinnayi. 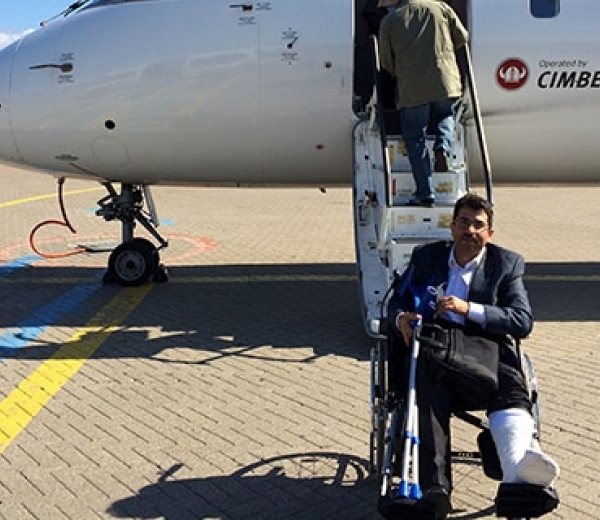 Mirza Dinnayi on his way to Hannover after attending the 22nd Special Session of UN Human Rights Council, 2014

After that project was over, he still continued to help the victims. It was Dinnayi who brought to Germany the future Sakharov Prize Laureate Lamya Haji Bashar. Today, she is a renowned human rights activist and has one of Aurora’s scholarships named after her.

“I think the impact is there, especially when the victims collaborate. There are many victims who say, there is a reason I have survived this. There is a reason to do something. I think this sort of humanity can unite all of us. What inspired me in the Aurora Initiative is that you are awakening this humanity inside us, and this is important,” he asserts. 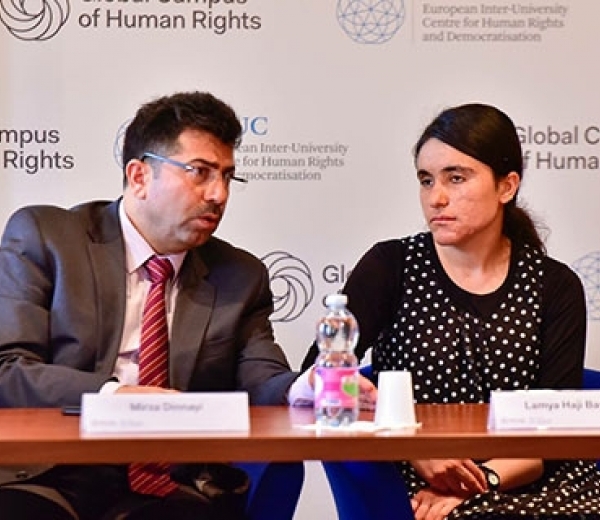 Mirza Dinnayi, who turns 46 this year, has no intention of giving up on humanity. “Wherever the victims are, if you know about them and you say, I don't care, you will forever feel guilty. This was the thing I told myself, and it helped me to overcome my trauma and continue my restless work” recalls Dinnayi. “We are survivors of a genocide. We don't want this genocide to happen to any other community. This is the message of Aurora.”

Subtitle:
Yazidi activist Mirza Dinnayi has dedicated his whole life to saving the victims of the Iraq war.
Header image: 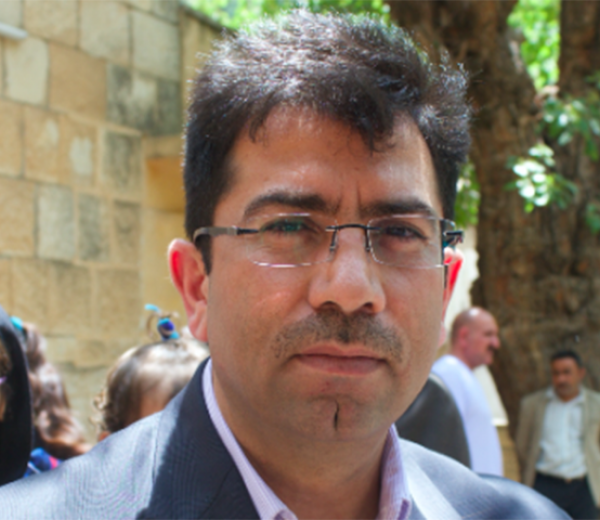