Shining the Light of Justice on Secret Prisons

Yemen is currently going through one of the worst man-induced humanitarian crises in its history. The country is devastated by civil war between Yemeni authorities on the one side and the armed movement called Houthi, and their local and international allies on the other. Some extremists, including supporters of the Islamic State group, have taken advantage of the unrest by occupying disputed territories and initiating organized violence. As a result, 80% of the country’s population are in need of humanitarian assistance.

According to reports by human rights groups, more than 18,000 people have been thrown into secret prisons located in Yemen but run by foreign governments. The prisoners, accused of cooperation with terrorists, are routinely tortured and abused with no access to legal counsel nor hope for justice.

An investigation based on the testimonies of those who managed to get out, their family members, human rights activists and local military officials, published by the Associated Press, stated that this clandestine network consists of about 18 detention centers hidden away at “military bases, airports and seaports, the basements of private villas and even a nightclub.” Ms. Al-Sarari contributed to another report, released by Human Rights Watch in June 2017, stating that least 49 people, including four children, were arbitrarily detained or forcibly disappeared over the last year.

She’s been paying the price ever since the report was published.

Her ordeal began immediately after she gave the first interviews to the media about torture in secret prisons. The Middle East Eye reported on the brutal defamation campaign against her. On social media, she was called a liar and a mercenary. She was accused of being a traitor and a spy lobbying for Western governments. She also received numerous death threats.

The threats followed Huda Al-Sarari into her own home. Her phone was taken by unknown persons from inside her house in Aden. On the same day, her car windows were smashed. Even her Internet connection was deliberately cut off. Someone she personally knew stepped into her office to threaten her, saying that she should "be careful of your coming steps, otherwise you will risk your life." Ms. Al-Sarari ’s family begged her to stop, if not for her own sake, then for her children’s.

Yemen remains a very traditional society, and the smear campaign against Huda Al-Sarari was so gut-wrenchingly efficient specifically because she is a woman. “Calling me degrading words has a stronger negative impact on me than it does if it were directed against a male activist,” explains Al-Sarari. By taking on the officials who chose to turn a blind eye to the detention centers and the atrocities that happen there, she showed incredible courage.

All of this psychological abuse has taken a toll on the activist. “I was afraid to leave my house or speak to media for more than a month,” Al-Sarari told Middle East Eye. “But now, I want the word out, at least about the dreadful experience [human rights activists have to] bear."

Ms. Al-Sarari has always been passionate about fighting for human rights, justice and equality. In 2011, she obtained a degree in Sharia law from Aden University. She also holds a master’s degree in Women's Studies and Development from the Women's Centre at Aden University. She is a member of the Yemeni Women’s Union, which promotes women's civil rights, offers legal support for women and protects the rights of female prisoners.

Huda Al-Sarari has dedicated almost 10 years of her life to human rights activism, collaborating with well-respected institutions like the Adala Foundation for Rights and Freedoms and the National Committee to Investigate Allegations of Human Rights Violations. She has also volunteered her time to assist Amnesty International and Human Rights Watch. It is for the latter that she documented, often working alone, the abuse taking place within the secret prisons. The backlash was swift – and vicious.

Huda Al-Sarari has no intention of stopping while she knows there are innocent people caught up in the arrests. Beyond fighting for them, her mission is much grander. She wants to see the rule of law in Yemen. Even al-Qaeda suspects should be detained and questioned legally, she argues. Committed to her community, she refuses to flee Yemen, placing the responsibility to help the unlawfully detained before her own life.

Huda Al-Sarari, the unstoppable crusader determined to deliver justice to those who’ve lost all hope, is certain she will prevail. 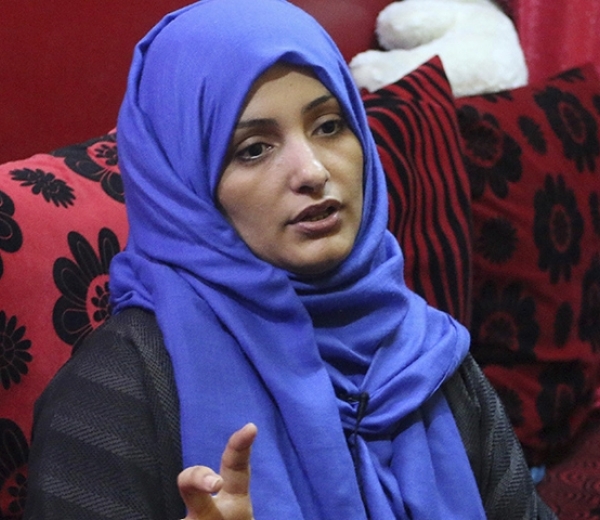