An infant born with defects in her legs, Sunitha Krishnan learned at a young age what it meant to be an outsider. Forced to wear corrective casts for much of her childhood, Sunitha knew she was different from the other children in her country, India – describing her childhood self as “physically distant,” yet an ambitious achiever who was extremely passionate about reaching out to those more disadvantaged than her. When her casts were finally removed, she taught herself to dance, and found joy in teaching mentally handicapped children what she loved. In her early teens, she even started a small learning center/school for children in a nearby by slum.

But when she was only 15 years old, Sunitha’s happy life was shaken to the core. She was gang raped by eight men – whose faces she did not know and could not recollect afterwards. “Overnight, my entire world changed,” she recalls.

Sunitha survived the attack, but she quickly realized her struggle had only just begun. Her parents shamed her. Her community shunned her, blaming Sunitha herself and her family for allowing this to happen. Sunitha was being punished for the crime committed against her, and she was utterly alone with no one to turn to.

Her body had been violated by evil men and her reputation disparaged by those around her, but Sunitha did not allow them to diminish her inner strength. Instead, she saw an immense need for change and an opportunity to bring awareness and support to young women who experienced similar trauma.

She earned a degree in psychiatric social work and began counseling women in prostitution. She then joined the People’s Movement – an alliance of civil society organizations and individuals in India working toward progressive goals – and was subsequently arrested. She was blamed for her advocacy and spent two months in jail. Upon her release, Sunitha established Prajwala, which began humbly with a mission to rescue and rehabilitate victims of sex trafficking and help them reintegrate into society. Today, it has evolved into one of the world’s largest civil society organizations crusading against sex trafficking and sex crime saved more than 18,500 women and children.

Sunitha’s gang rape – a source of so much trauma – has become one of the biggest sources of motivation in her life. “It made me realize this is how people treat victims of sex crime. You’re treated as a criminal through no fault of yours,” she explains. “And that is when I took a decision in my life: this is the mission that I will undertake. From now, from this moment onward, and every moment of mine, will be dedicated to defeating sex crime and sex trafficking.”

She began working alongside local police and established three separate shelters for the victims they rescued: one emergency shelter, one for adult victims and one for children, sometimes as young as only three years old. While Sunitha is out on the front lines every day working to rescue people from imminent harm, she is equally focused on ensuring that they have the long-term support and resources they need to successfully return to society.

“When I set up Prajwala, I wanted to create a safe community for survivors of sex trafficking. This desire to empower the victim comes from my own understanding of harnessing my pain to power,” she explains. “For every child and for every woman who leaves Prajwala, we want them to leave with a sense of power, dignity and self-identity.”

Thanks to her advocacy work with local governments, Sunitha is able to ensure that these women have compensation, legal citizenship, housing and jobs as they leave the shelter and return to society. Without these resources, victims of sex crimes and commercial sexual exploitation typically end up back on the streets, severely ill or even dead.

At the end of the day, Sunitha sees her work as a truly global effort – spanning beyond India’s borders and representing a fight against sex trafficking around the world. “I’m not here to run a small organization. I’m here to transform the world by showing demonstrated possibilities in India - and make the world understand that any form of sex crime against women and children is deplorable and not to be tolerated.”

Subtitle:
A victim of brutal gang rape, Sunitha Krishnan has transcended from a victim of sexual assault to a strong human rights advocate
Header image: 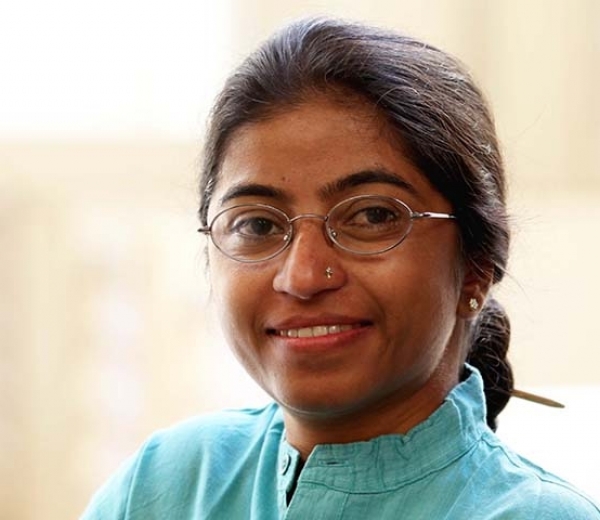