“Three years ago I had a dream that seemed unrealistic, and today we are all sitting here in Armenia, at the Matenadaran. I think it is very symbolic,” said Aurora Humanitarian Initiative Co-Founder Ruben Vardanyan in his opening remarks. The Mesrop Mashtots Institute of Ancient Manuscripts (Matenadaran), one of the world’s richest depositories of medieval manuscripts, was chosen as a venue that represents the Armenian people’s passion for intellect and academic study of the historic milestones that have shaped humanity. 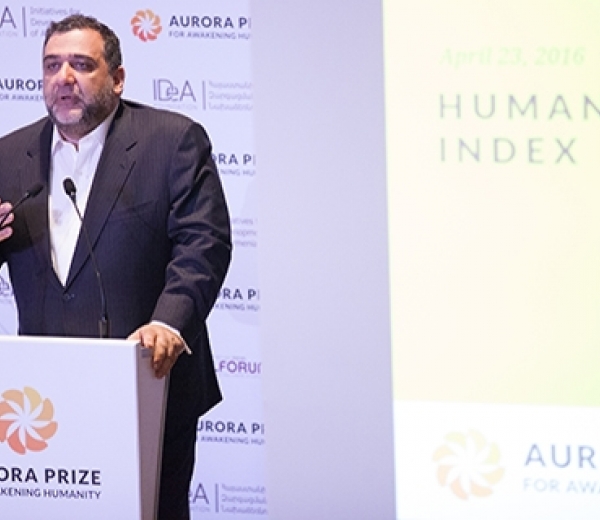 Text:
The first session of the 2016 Aurora Dialogues, moderated by President of the International Center for Transitional Justice David Tolbert and titled “The global state of humanitarian issues,” opened with a presentation of the findings of the “Global Humanitarian Index.” Other participants included  Dr. Shirin Ebadi, Hina Jilani, Dr. Edward Luck and Dr. Steven Luckert.
The panelists agreed that it is time for change to take place in the world both on the level of the individual citizen and on the level of governments and international organizations and noted that it will be impossible to overcome the challenges we face today if that doesn't happen.
The second session, “Saving the world’s refugees, Syria and beyond” panel of the Dialogues featured some of the world’s foremost humanitarians involved in governmental and institutional policymaking that affects the lives of millions of refugees. The participants included Aryeh Neier, Enrique Eguren, Gillian Sorensen and Gareth Evans.
The panel was opened by Vigen Sargsyan, chief of the Presidential Administration of the Republic of Armenia, who recalled the centennial commemoration of the Armenian Genocide, which took place last year, and emphasized the fact that “It is not only Armenia’s right, but also Armenia’s duty to organize forums about the crime of Genocide.” Moderating the panel was Gillian Sorensen, board member of the International Rescue Committee and senior advisor at the United Nations Foundation.
Image: 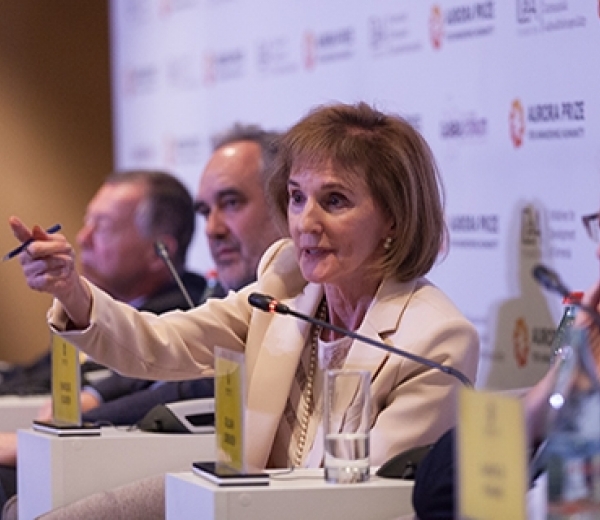 Text:
Session 3, the highly anticipated roundtable moderated by Nancy Soderberg, former United States Deputy National Security Advisor and former ambassador of the United States mission to the United Nations, was titled “The Role of Women in the International Humanitarian Community” and brought together a panel of exceptional women. It included two finalists for the Aurora Prize, Marguerite Barankitse from Burundi (who later became the inaugural Aurora Prize Laureate) and Syeda Ghulam Fatima from Pakistan. Joining them were Nobel Prize laureate, Dr. Leymah Gbowee from Liberia and Dr. Josephine Kulea, a dynamic young activist from Kenya.
The panelists discussed the inequalities between the sexes, as well as different forms of discrimination, and shared their respective experiences in turn. According to Soderberg, the more women are involved in world affairs, the more they will contribute to solving problems like access to education, the resolution of conflicts and socio-economic development.
Image: 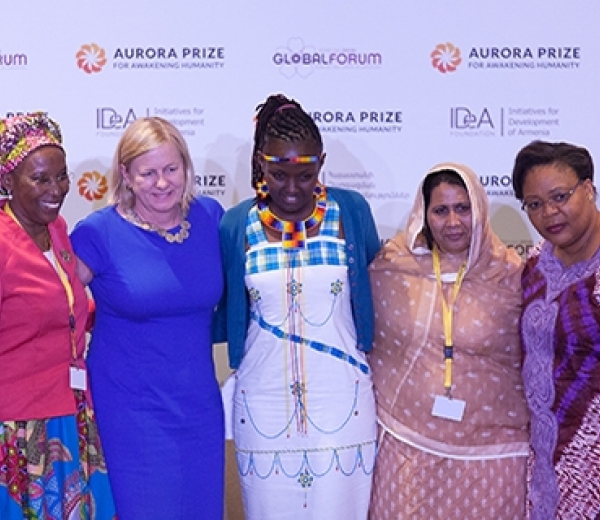 Text:
The last panel of the Dialogues, titled “Shining a light on the crisis,” focused on the role the media plays in covering humanitarian crises and shaping the public’s opinion about them. The participants included Steve Kurkjian, David Ignatius and Joyce Barnathan, and the discussion was moderated by Ted Koppel, a prominent U.S. journalist and a senior contributor the CBS Sunday Morning News.
Image: 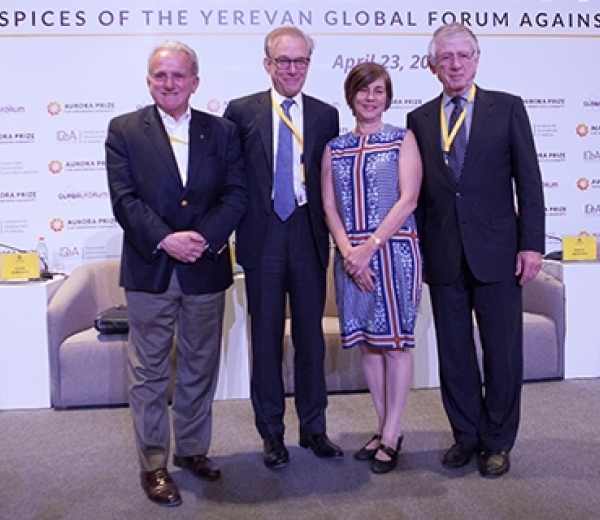 Text:
Much of the discussion centered on the evolving media landscape and the role that social media plays in the way humanitarian crises around the world get reported. “Breaking news is no longer in the hands of CNN, or ABC or NBC. Citizens break the news,” said Joyce Barnathan, president of the International Center for Journalists. The panelists also talked about the reality of the modern world where traditional media’s authority is waning and it is becoming more difficult to aggregate the various points of view to create an objective, verifiable reality. Nevertheless, the overall attitude of the participants was that of cautious optimism.
Image: 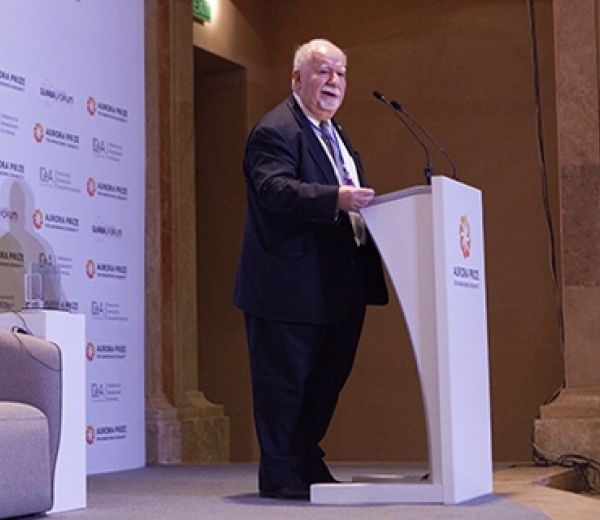 Text:
The closing thoughts to the Aurora Dialogues we offered by Vartan Gregorian, Aurora Humanitarian Initiative Co-Founder and president of the Carnegie Corporation of New York. As the former president of Brown University and a man who has devoted his life to education, it was not surprising that Gregorian chose to emphasize the role of education in the prevention of atrocities and the progress of humanity, saying, “My frustration is that many people are not educated.”
He also emphasized the importance of knowing history, geography and languages – subjects that help us understand each other. Gregorian mentioned that the 17,000 manuscripts held at the Matenadaran were not only Armenian, but also Turkish, Iranian, Russian, Yezidi and of other origins – a testament to the co-existence and mutual understanding integral to the goal of the Aurora Prize for Awakening Humanity. It was a point well taken.
The students of the international UWC Dilijan also took part in the Aurora events: several guests of honor, including the Aurora Prize Selection Committee Co-Сhair George Clooney, visited the school. The meetings turned out to be a one-of-a-kind lesson in humanity for the future leaders.
Following the welcome tour of the school for each of the guests, the students had an opportunity to pose their questions about the most pressing global humanitarian issues to the actor and philanthropist George Clooney and international activist John Prendergast, the co-founders of Not On Our Watch organization that seeks to prevent future genocides and human rights violations.

Subtitle:
A conversation about the world’s most pressing humanitarian issues
Header image: 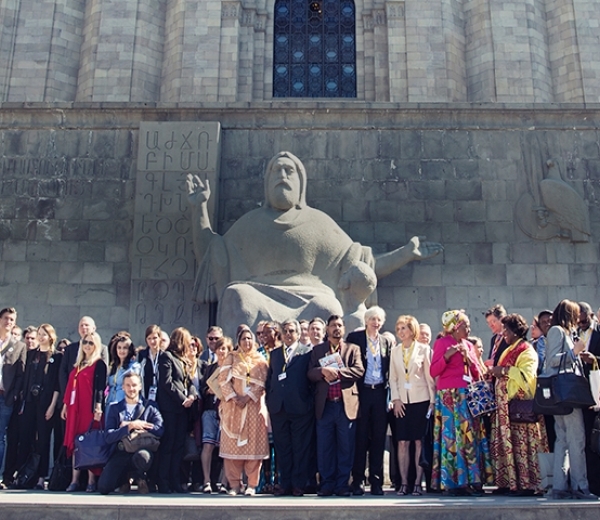