The 2018 Aurora Dialogues Moscow began with opening remarks by Andrei Sharonov, President of the Moscow School of Management SKOLKOVO, who welcomed the participants and introduced Aurora’s consultant Harout Chitilian to the audience. Harout Chitilian explained the logic behind choosing Moscow as the Dialogues’ host city and talked about his personal experience that led him to joining the Aurora team. After that the audience got a chance to see a video about the Aurora impact.

After that 2016 Aurora Laureate Marguerite Barankitse, founder or Maison Shalom and REMA hospital in Burundi, expressed her gratitude to the Aurora Humanitarian Initiative and moved the guests with a heartbreaking account of the tragedies she had had to face and overcome. “My family members were killed, but I refused to let hatred into my heart”, she said, adding: “My gratitude is very deep. The Aurora Prize has changed my life. You gave us back our dignity. You showed us that love can change lives and it can change the world.”

After that Anderi Sharonov has introduced the panelists of the fishbowl discussion titled The Future We Want: Leonid Grigoryev, Head of World Economics Department of NRU HSE, Oksana Oracheva, General Director of the Vladimir Potanin Foundation, Veronika Zonabend, Founding Partner and the Chair of the Board of Governors of UWC Dilijan College in Armenia, and Manfred Kets de Vries, Founding-Director of INSEAD’s Global Leadership Center. The participants addressed the gaps and distortions existing between the ideal future, individual needs and the doers working to make an impact.

Oksana Oracheva explained that the Russian non-commercial sector is also, to some extent, working on achieving the sustainable goals: “If we look at the philanthropy industry, the role of the non-profits and charity organizations in the transformation process is quite important everywhere, including Russia. This has something to do with the fact that non-profit sector is based on social missions and goals, what we usually call a “brighter future”. So we work in this area but don’t necessarily use the same vocabulary.” Leonid Grigoryev elaborated on the role the economy plays in solving the global issues, joking: “There is no economy but the world economy.”

Finally, the last part of the 2018 Aurora Dialogues Moscow consisted of several roundtable sessions. All participants were invited to address pressing issues and questions at interactive roundtable discussions with conference experts and draw their own conclusions as to what measures should be taken to solve the global challenges the humanity is facing today.

You can watch the full video of the 2018 Aurora Dialogues Moscow here (in Russian). 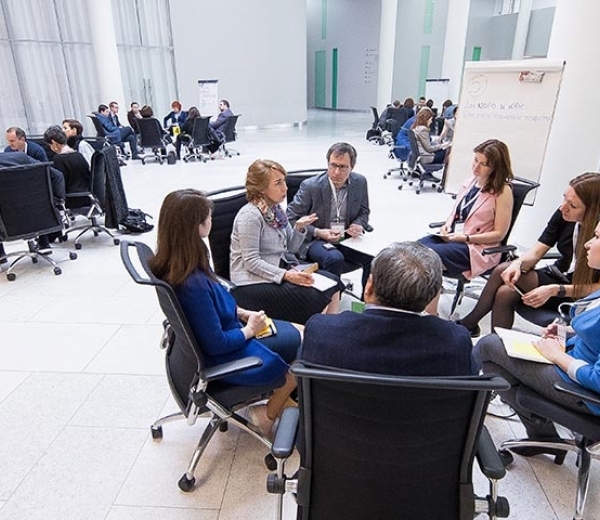