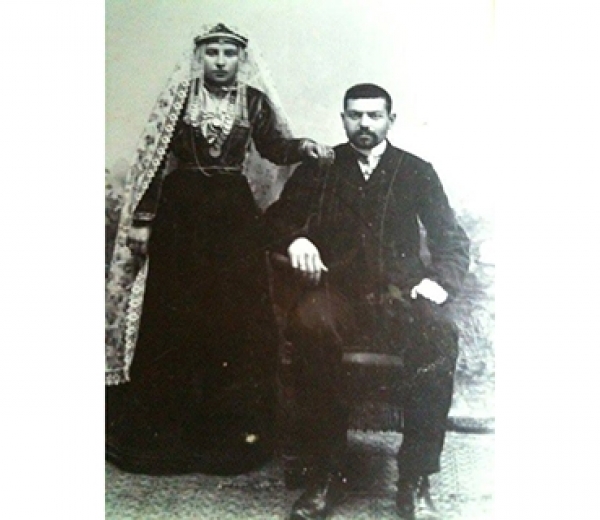 Text:
“The family on my father’s maternal side, my great-grandfather Garegin and great-grandmother Tazagül Arakelyan, also hailed from Kars. Garegin was one of those people who knew how to plan ahead, so he understood quite early on that the situation would get worse, that there were hard times ahead for Armenians and that he had to look for safety. He was a merchant, and they say he even had his own ship to transport the goods, so he moved the family to Tbilisi, Georgia,” says Anna.

On her mother’s side, the tragedy of the Genocide touched the Mazmanian family even more deeply. Anna knows the story from her grandmother and retells it as if she had survived those distant events herself.

“My great-grandmother’s name was Tamara Arzumanyan and I remember her very well and remember the stories that she would tell me. You could say that I grew up with them. My great-grandmother was born in 1907 in Igdir, not far from the Russian-Turkish border. During the Genocide, she was still a child, so her memory blocked all of the negative times. This is probably why she didn’t speak in any detail of the escape itself; but she told me a lot about the way her family lived, what their house was like and how her nannies spoke French. She was the tenth daughter in a family of 12 children; two boys were born after her. Tamara was deeply loved; her father adored her. I remember that she told me, ‘Although there were ten girls in our family and our father Tigran always wanted a son, after each daughter was born, he came to congratulate our mother and hired musicians who played zurna and dhol. He had stores all over the town’,” Anna remembers.
Image: 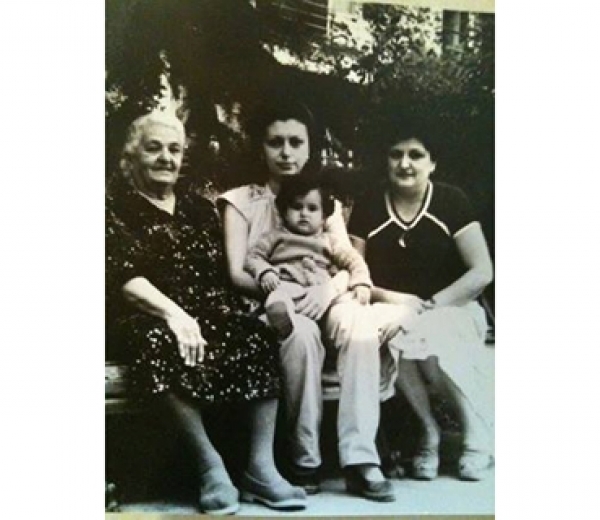 Text:
“People’s artist of Armenia” Eduard Isabekyan, who dedicated many beautiful canvases to his native city, mentions the life of Tigran Arzumanian (Arzumanents) in Igdir before the beginning of the persecutions in his memoirs: “People felt a vague anxiety, some heaviness, something inexplicable in the air. It was something that nobody could explain. This feeling didn’t fit in with your people, their amazing… composure, or was it indifference… But neither this anxiety, nor the foreboding could prevent Tigran Arzumanents and his ten daughters… from sitting on the balcony in the evenings, enjoying the oncoming coolness, drinking tea with their favorite jams and, in the absence of conversation, having internal monologues.”
But the menace finally came to Igdir. Tens of thousands of Armenian refugees began to arrive in the city from Western Armenia. There was hunger and cholera. Soon the residents of the city themselves had to leave their homeland — the advancing Turks were slaughtering everyone in their way. The streets of Igdir were covered with the corpses of those who fell behind.
Saviors among us
Anna’s family was saved from the massacres by the military commander General Dro Drastamat Kanayan; together with his militiamen, he covered the retreat of the civilian population. General Dro was one of the best-known members of the Armenian national liberation movement of the early 20th century.
One night, not long before the Turks entered Igdir, Dro went to the Arzumanyan’s house and told them, “You have several hours to save yourselves.” That night, the youngest of the brothers was left sleeping in his cradle. Tamara’s parents, Tigran and Aikandukht, realized it halfway out of the city. In all the commotion, they thought that one of the nannies or servants had the child. The militiamen had to go back and get the youngest son.
“Grandmother Tamara told me that when they gathered their things, they thought they were leaving for just a few days. They didn’t realize that this was forever, for their whole lives. Later she would tell her granddaughters, ‘We buried everything valuable that our family had in the house under the walnut tree.’ She would describe everything — the house and the tree. They sewed the jewelry into the hems of their skirts. Tamara knew that her father also had Swiss bank accounts but, in Soviet times, they were afraid to mention their former wealth,” Anna says.
Her great-grandmother never spoke badly of Turks and never remembered the grief they caused. “But at the same time, despite knowing Turkish, she never said a single word in that language,” remembers Anna. “There were times when she wanted to call out ‘fork’ or ‘bread’ in Turkish, but she would overcome the urge.”

After the warning, the family first went to Echmiadzin and then to Yerevan. They had an opportunity to move to America, but Anna’s great-great-grandmother Aikandukht refused outright, saying that they should stay on their land while they still had it.

Anna says her great-grandmother Tamara kept her love of beautiful things till the day she died. “In Yerevan, on Tumanyan Street, my great-grandmother had a very beautiful apartment, where my grandmother, Irina Darbinyan, grew up,” Anna says. “As I understand now, great-grandmother tried to recreate the house that they had in Igdir, which is why she treated fabrics, dishware and furni-ture with such reverence.”
The fate of Anna’s family on the side of her maternal great-grandfather, David Darbinyan, was even more tragic. He was also born in Igdir, but his relatives didn’t have time to leave the city before the massacres. “The only people to survive were he and his mother. They escaped to the village of Mrgashat, where they were taken in by a local family. All of his uncles and relatives lived in neighboring houses. They were drafted and sent to war, where they died. Great-great-grandmother died young and David was basically brought up by Osan, a girl from the family that gave them shelter. She was just eight years older than David, but the whole family saw her as his mother,” Anna explains.
Image: 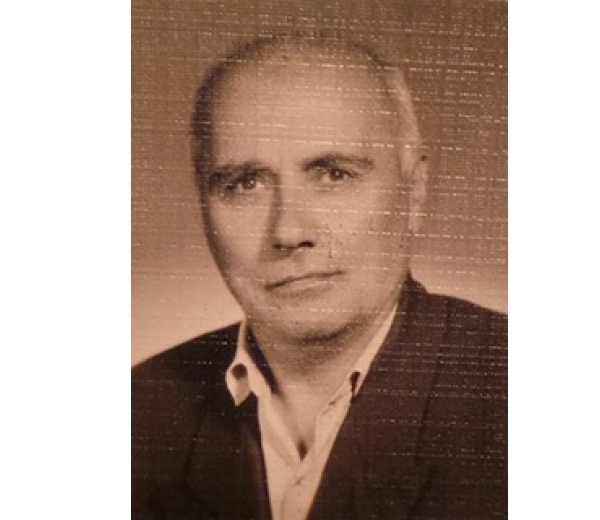 Text:
“During the Great Patriotic War, my great-grandfather was stationed and served in Iran. The war years made life in Armenia very difficult. David would often send foodstuffs home, so in came olive oil, dried fruit and grits, and great-grandmother would make dinners for all the neighbors,” Anna recalls.
Anna remembers the dinners and feasts her grandmother would prepare for the whole family. “Grandmother Tamara was an amazing person; despite everything she had to live through, she was very cheerful, the life of the party. She would have a full house of guests and she was always an optimist.” According to Anna, her grandmother believed that each succeeding generation of their family had to be more successful than the previous one. “I am trying to live in such a way as to be worthy of my ancestors and not disappoint them,” Anna adds.
Religion, language and cuisine
Anna Mazmanian is convinced that Armenians are in no danger of assimilation as long as they have their religion and their language: “My sons, who are six and seven years old, have recently begun to study Armenian, and now they tell me, ‘Maybe we shouldn’t be living in Moscow. We are Armenians and we should be living in Armenia’.”

“I believe that today the world has changed and you can live anywhere – to study, to work – anywhere you feel comfortable. But at the same time, you should always remember who you are, where you’re from and who your ancestors were. You should know their names, know your language, oral and written, and know your history,” says Anna. 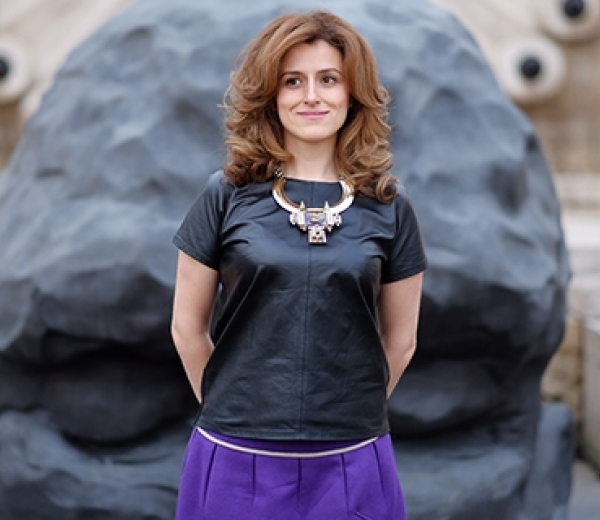 Text:
As a cook and the founder of a culinary project, Anna is convinced that the third pillar of Armenian identity is its cuisine. “I have a theory that it was their food that helped Armenians survive. As I was studying the culinary arts, I began to think more and more about Armenia, which has a huge potential – but almost no opportunities – to realize its culinary traditions. Even local residents know very little about the national cuisine. There has been (and still is) this sort of everyday, Soviet-Armenian cuisine, but many national dishes are forgotten and no longer cooked.”
Anna herself strives to observe not just the culinary, but also the religious and cultural traditions, believing the three form a unified whole: “For example, I try to cook traditional dishes for the holidays, because the holiday feast, the taste sensations, the symbolism — all of this is very well re-membered by the children. They will remember, for example, that Easter always means fish, rice pilaf with dried fruit, colored eggs and wraps. Their language, their history and those sensations of taste will always remind them of who they are.”

“Why do we have these desserts, and not the others? Because we come from the mountains and our ancestors made such cakes, so that the shepherds could take them to go and be sure that they won’t spoil,” Anna explains.

The guardian of the ancient traditions of the hearth, Anna Mazmanian is convinced that Armenians have a great future ahead of them thanks to their "survival gene:" “When my sons are unable to do something and they complain to me, I tell them, ‘Your ancestors went through terrible times; they survived and kept faith in themselves – and none of it so you could complain about some trifles.’ Armenians are self-aware people, but we love to look back too much. At the same time, I think we don’t know how to look forward, we don’t see beyond the horizon. I’m sure that for the sake of future development, we should tell ourselves, ‘Let us enjoy life today, but make plans for 30 years into the future!’”
The story is verified by the 100 LIVES Research Team.
Subtitle:
A guardian of the hearth: “Their food helped Armenians survive”
Story number:
135
Header image: 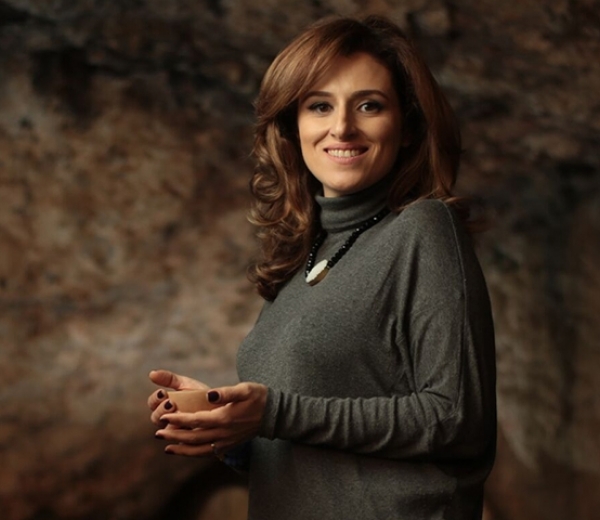