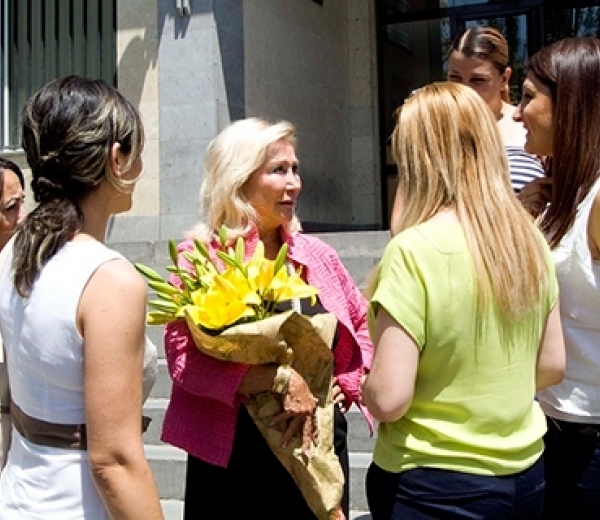 Text:
For her work as an author and her contributions to Armenian culture, Margaret received the Ellis Island Medal of Honor in 2011. She is also a member of the National League of PEN Women. Her hobbies include sailing (she holds a 100-ton master captain’s license), hunting and fishing.
The knock at the door
Ajemian Ahnert’s most remarkable accomplishment may well be her moving historical memoir “The Knock at The Door: a Mother’s Story of Surviving the Armenian Genocide.” The book chronicles the life of her mother Ester Minerajian Aharonian Ajemian, who survived a barely believable series of events in Amasia before and during the Armenian Genocide, to eventually start a new life in America. “The Knock at the Door” received numerous accolades and awards, including USA Book News’ “Best Book of 2007” and the New York Book Festival’s “Best Historical Memoir, 2008.” The title refers to the knock that many Armenian families received — sometimes in the middle of the night — signifying that Turkish police was deporting them, often to a certain death.
Image: 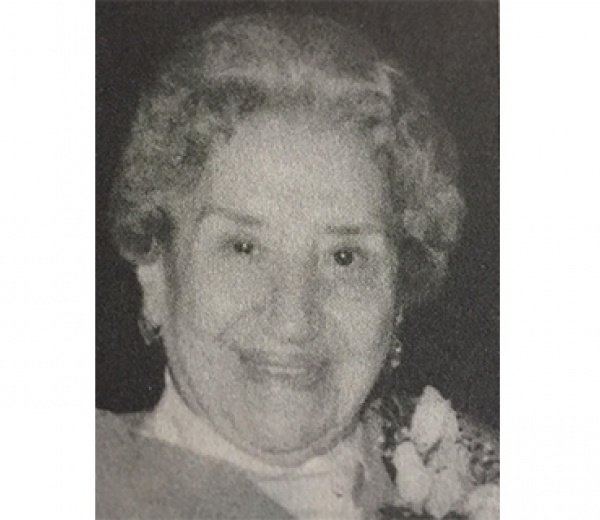 Text:
The memoir is written from Margaret’s point of view, as she visits her now elderly mother in an Armenian retirement home. During tender visits, her mother relates a rich and harrowing history — one that is, however, also a history of triumph and survival.
Ester Minerajian was born in the beautiful riverside city of Amasia. Her mother died in childbirth and her father soon fell gravely ill. Before passing away, he entrusted her and her five siblings to an uncle who, instead of taking care of them, gave them up for adoption. Thus Ester was brought up by the relatively wealthy Hajii Hagop Aharonian and his wife, the stern Pepron, never to see any of her siblings again, except for her brother Harutiun, a translator and soldier in the Turkish army. While “The Knock at the Door” primarily chronicles Ester’s struggles during the Armenian Genocide, Ajemian Ahnert also provides many details about daily life in Amasia: the food Armenians ate and the celebrations they engaged in, as well as their everyday attitudes toward women, family and religion. Besides it’s literary merit, the book has significant anthropological value.
Image: 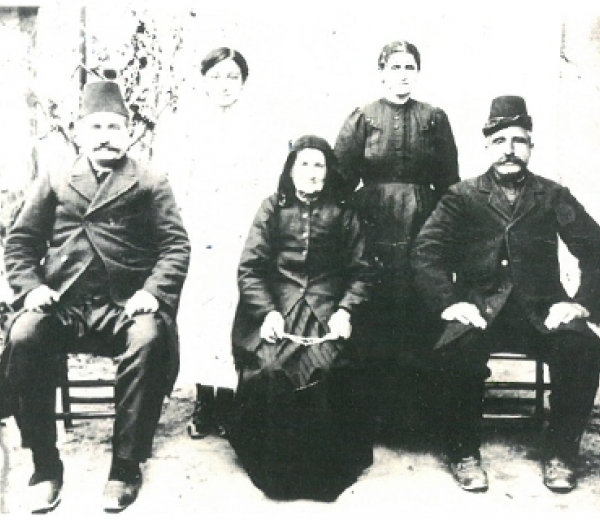 When rumors of the killings of Armenians first reached Amasia, Ester’s family refused to believe the situation was as bad as it was being described. Ester’s brother Harutiun was able to find and warn her, but his advice went unheeded — no one wanted to believe that hundreds of years of Armenian life in Amasia would end so abruptly, or that neighbor would turn against neighbor. Ester was eventually deported along with other Armenians from the town. She witnessed friends and family members killed in the most horrible ways: “Then the rain came….a flood of water rushed down from a hill close by, bringing with it a mixture of small rocks, sand, mud and all kinds of human filth. The little children were the saddest. Some slipped right out of their mothers’ arms and disappeared into the thick mud. The lighting, thunder, and pounding rain seemed to make the soldiers crazy. They attacked us harder than before, as we ran to get away from them. I tried to fill my small cup with some water that spilled from the corner of the quilt. I collected only drops,” Margaret quotes her mother in her book. 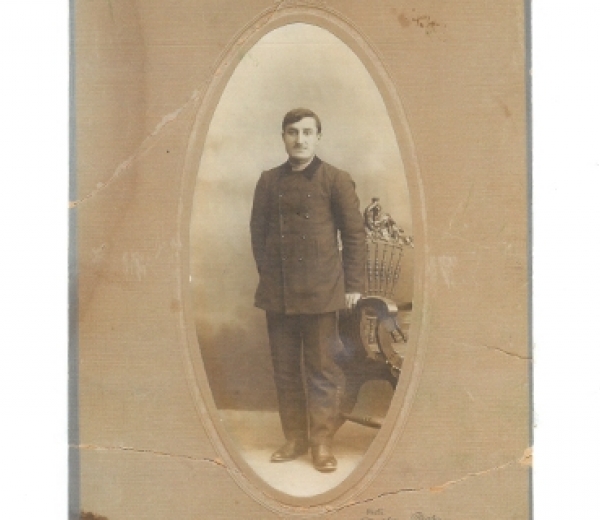 Text:
Thanks to her bravery and the kindness of her friend Siranoush, Ester survived and eventually ended up in Malatya, tossed onto the back of a wagon headed for Sivas. There, she was married against her will to a young Muslim boy named Shamil. Her new family converted Ester to Islam, but she continued to pray in Armenian. In another remarkable twist, her brother found her again, and though he eventually disappeared for good, he managed to have her hidden by the neighboring Bagradian family. She was reunited with her adoptive father in Amasia, where he now once again lived with his second wife, a beautiful German woman named Gretel who had for all practical purposes become Armenian.
In 1920, when a new round of purges begun, Gretel told Ester that she could either marry a Turkish neighbor or escape to America with Gretel and her father. For Ester, there was no choice. She gathered her belongings and made an arduous trip west: “We traveled by wagon from Amasia to Samsun. There we changed to another wagon for the journey to Constantinople. From Constantinople we sailed to Athens. In Athens we boarded the Greek liner, Megalorelass. Gretel and Bedros Effendi were in first class, and Eva, Sophia, Aram and I were in third class,” Ester remembers.
Image: 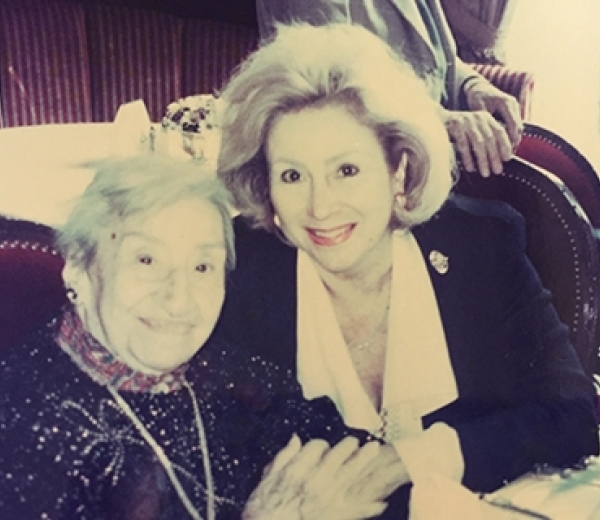 Text:
In New York, Ester befriended another Armenian, Albert Ajemian, who was from Dirvig and whose family had also suffered during the Armenian Genocide. They were married on April 24, 1921 in the Armenian church on 28th Street. Nothing seems to have come easy for Ester: the church council first refused to marry the couple because April 24 was the sixth anniversary of the Armenian Genocide, and because, technically, weddings could not take place during Lent. Ajemian Ahnert ends her moving story thus: ”Sometimes, I think I see my mother taking her afternoon walk on the street where I live. Often I reach for the phone to dial her at the Armenian Home, a daily habit; some rituals are hard to break. I think of Oscar Wilde, who once said, ‘The truth is rarely pure and never simple.' I believe Ester rests having told her truth.”
Henry Morgenthau Jr., the grandson of the U.S. ambassador to the Ottoman Empire in 1915, was so taken by the book that he called it "An inspired chronicle of one of the worst eras in human history,” and declared that “Had such books been written long ago, another Holocaust, which followed 25 years later, might never have happened."
Image: 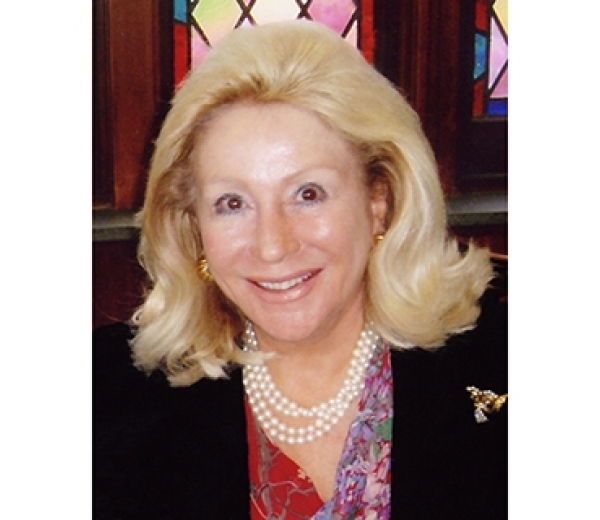 Ester’s life story riled Armenian Genocide deniers so much that several showed up at a 2007 book signing at Barnes and Noble, in order to disseminate false information and disrupt the reading. They were duly arrested, and, as Ajemian Ahnert states: “The incident frightened me, but not enough to quit. It just made me even more resolved to tell my mother’s story and let the world know the truth about what happened in 1915.” 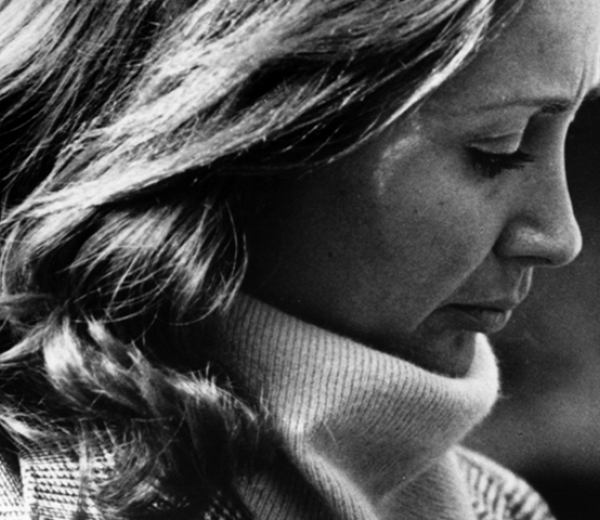