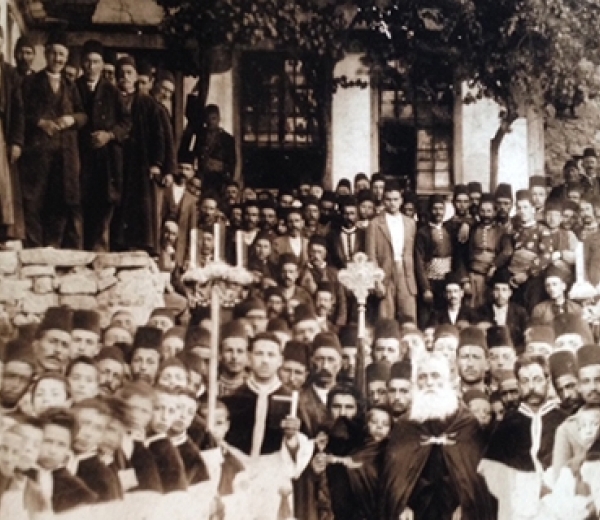 Text:
There was nothing left for her to do but dedicate herself to the profession that was already in her blood. While her peers drew pictures, she created landscapes out of shoe nails on pieces of rubber. “Many years later, when I first found myself in a shoe atelier and smelled the clay, plastic and leather, I was overcome with very strong emotions,” she says.
After many years of wondering, Karine has decided to piece together the odd fragments of her family's history. “With time, I began to realize that my memories weren’t grounded in anything. For example, I could never remember the name of the village my grandmother was from. It all seemed so abstract to me. I have a difficult relationship with memory,” admits Karine. But she can count on her father Serge, who is currently trying to write it all down.
As a child, Serge Arabian loved to eavesdrop on adult conversations, standing near the timber wall of his house.

“They rarely spoke about the Genocide,” he says. Karine echoes her father: “It would seem that the Genocide survivors gradually erased all the traces of the past from their memory in order to go on living.” 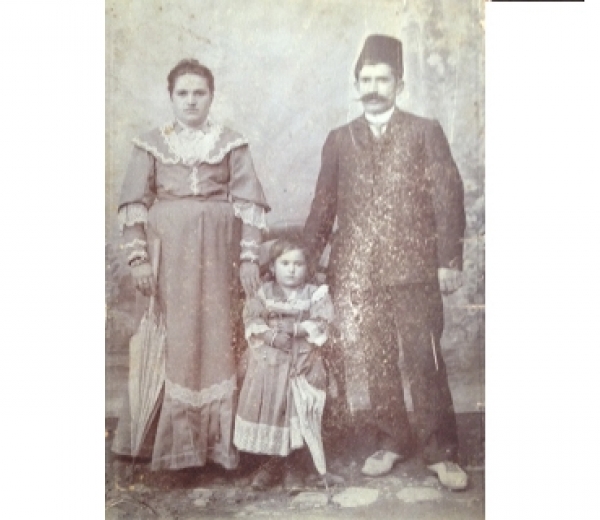 Text:
A life-saving baptism
In his youth, Karine’s paternal grandfather Mkrtych (or Merzhe) Arabian cultivated poppies in the village of Sivrihisar, in southwestern Anatolia’s Afyonkarahisar Region. He later became a railway station chief in the town of Eskişehir, a stopover on the line that connected Afyonkarahisar with Izmir.
Merzhe’s first wife was from Sivrihisar. In 1915 she escaped with their two children to the Bulgarian town of Plovdiv. In 1921 Merzhe married again, this time – a girl from the village of Ursak named Marie, who was 24 years younger. All the while, he was still married to his first wife, who remained in Bulgaria.
A year later, the new family, which lived in the city of Smyrna (now Izmir), had its first child, Joseph. During that time, Armenians began a mass exodus from Smyrna, worried about the approach of Kemal’s army and new massacres. But the Arabian family stayed behind and witnessed the fire that engulfed the city in September of 1922. “My father was friendly with a certain Italian,” Serge recounts. “Almost all of the outgoing ships were overcrowded, and only one had several places. It was an Italian ship that only allowed Catholics onboard. My parents had to baptize their son, who was just a few weeks old, in the Italian church. They received the baptism certificate and were able to take him with them.”
Thus the family was saved, but as Merzhe stepped onto the ramp to board the ship bound for Athens, some Turk saw his shoes and ordered him to take them off, threatening to stop him from leaving. Karine is horrified at imagining her grandfather being forced to give his shoes away at the pier.

“To leave the country, to leave everything behind, to be barefooted in the literal sense of the word is like cutting off all the ties to your homeland,” she says.

Eventually, the family moved from Greece to France and Merzhe was able to find employment with American Express in Paris. He climbed the corporate ladder, but lost his job in the crisis of 1929. He was barely able to help Marie, who sewed pants and provided for the family that lived in a little house in Gentilly.
After his dismissal from American Express, Merzhe worked at the secretariat of the Armenian church in Paris. “He had very beautiful handwriting, so he worked as a public scribe. He was highly respected by Armenians who lived in Paris. They came to him for help when they needed to formalize papers for the prefecture police,” Karine says.
Merzhe died in 1949, when Karine’s father Serge was just 11 years old.
Image: 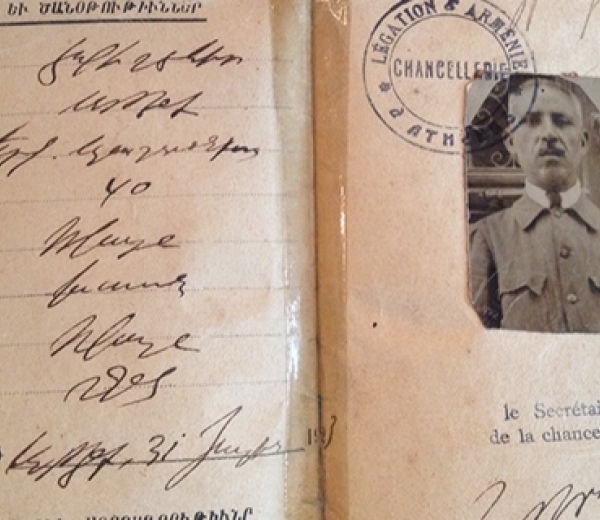 Text:
A perfect storm
Karine is the eldest child and the only daughter. She grew up a rebel, often resorting to protests and conflicts to get her way. Serge wanted his daughter to join the family business and sell clothes, but Karine flatly refused her father’s will and felt excluded at her own home for a long time. “My parents wanted me to have a quiet life. They wanted me to continue the family business, but I had different plans, most of them secret. I was always inspired by the world of fashion,” she admits.
Fashion and creative design, her two passions, guided Karine on her life’s journey. Her parents instilled in her a love for work well done. After receiving her university diploma from Studio Bercot with a specialization in art and technologies of fashion, Karine presented her first collections of accessories at other young designers’ boutiques. In 1993 she won the International Fashion Competition Hyères and was offered a job at Swarovski.
Image: 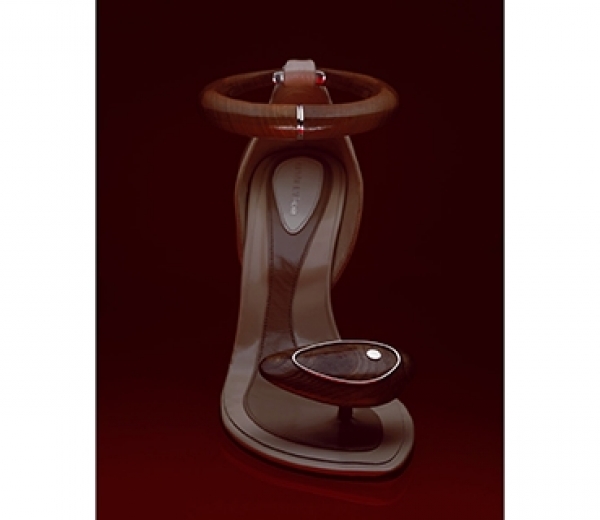 Text:
Karine’s life was transformed when she went on a trip to Armenia with her family in the summer of 1999. For the French-born Armenian, the trip was bewildering. As she touched ancient walls, the armor that protected her from the outside world fell away. The inner storm that swelled inside her produced a powerful, creative impulse.
In 2000, together with her cousin she opened her first footwear and leather accessories store in the 9th arrondissement of Paris. The shoes’ rounded toes distinguished her brand. Both the store and the atelier allowed Karine to take her career to the next level.
Image: 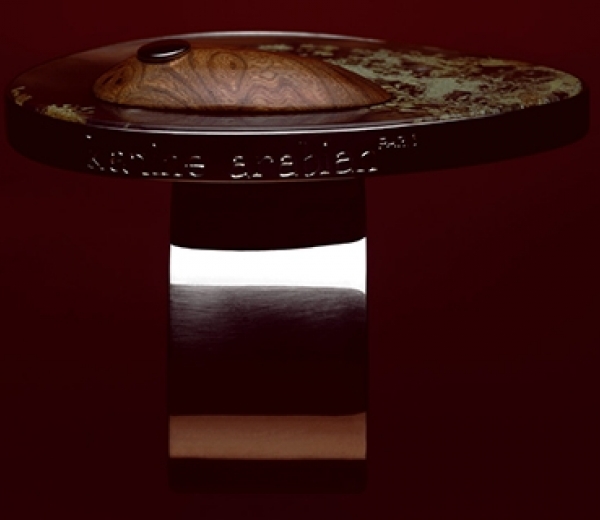 Text:
Armenian heritage as a key to success
Karine dreamt of giving work to Armenian artisans. She imagined a project that would combine traditional jewelry techniques and the Armenians’ mastery of stone- and woodcutting. Her attempt to reconcile Armenia’s austere, mountainous scenery with her world of luxury and high fashion led to the creation of the “Minerals” collection, released in 2003.
Image: 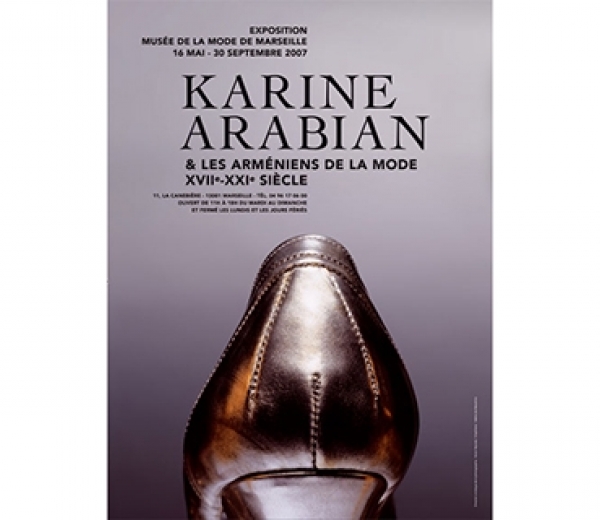 In 2007 the Marseille Fashion Museum approached Karine, asking her to curate an exhibition in honor of the “Year of Armenia” in France. The retrospective, titled “Karine Arabian and Armenian heritage in fashion, 1600s-2000s” opened in May of that year. As she prepared for the event, Karine closely studied the family’s archives and came to terms with her Armenian heritage in the process. After fully accepting Armenian culture as her own, Karine shed the heavy burden of omission that kept weighing her down. 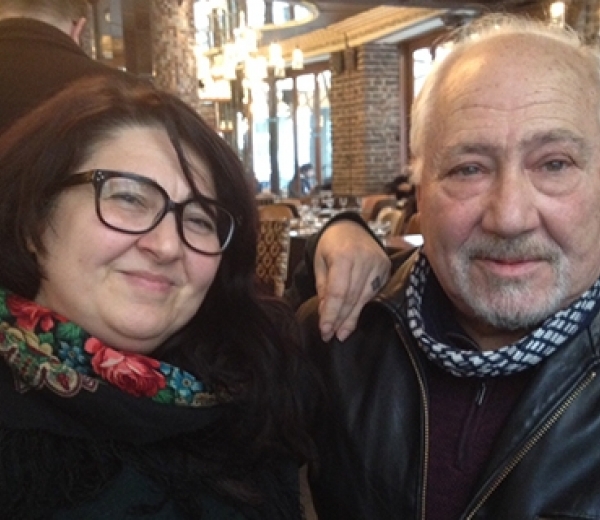 Eventually Karine sensed that she was becoming a hostage to her own work, and after lengthy deliberation she sold her brand. She now hopes to go to Turkey with her father in order to trace her ancestors’ footsteps. 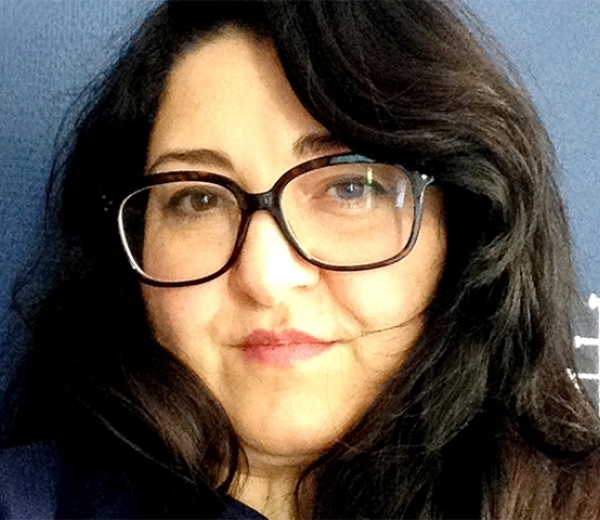