Submitted by global publisher on Fri, 08/28/2015 - 12:49
English
Intro:
Born in Providence, Rhode Island, Michael Aram is best known to the world and to the Armenian community as a creative artist who took a simple idea – working with traditional Indian metal-crafting techniques, which he fell in love as a youth – and transforming it into a global lifestyles brand with a distinct style that also draws from his Armenian roots.
Weight:
-400
Related content:
Francis Kurkdjian
Tags:
Survivors
Story elements:
Title:
Global lifestyle empire
Secondary Title:
sprung from
Tertiary Title:
Armenian roots
Text:

Born in Providence, Rhode Island, Michael Aram is best known to the world and to the Armenian community as a creative artist who took a simple idea – working with traditional Indian metal-crafting techniques, which he fell in love with as a youth – and transforming it into a global lifestyles brand with a distinct style that also draws from his Armenian roots. The grandchild of Armenian Genocide survivors from Arabgir and Kharpert  (present-day Elazig in Turkey), today Michael Aram Wolohojian is a renowned designer. He launched his first metal-ware collection in 1989 after taking a trip to India, where he began working with local craftsmen. He currently sells his work in over 600 locations worldwide, having opened his first namesake boutique in Manhattan in 2007.

Quote:
He currently sells his work in over 600 locations worldwide, having opened his first namesake boutique in Manhattan in 2007.
Image: 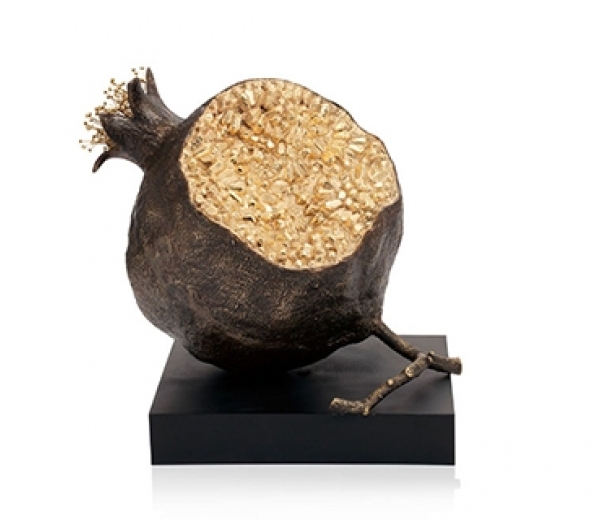 Michael Aram is active in the Armenian community in New York City, where he is a board member and a supporter of The Children of Armenia Fund (COAF), the Tumo Center for Creative Technologies and other organizations, as well as a supporter of the Eastern Diocese and his local Westchester church, St. Gregory the Enlightener, for which he created all of the interior metalwork and the steeple cross. He currently lives in New York City with his partner Aret, who is also Armenian, and two children, Thadeus and Anabel. 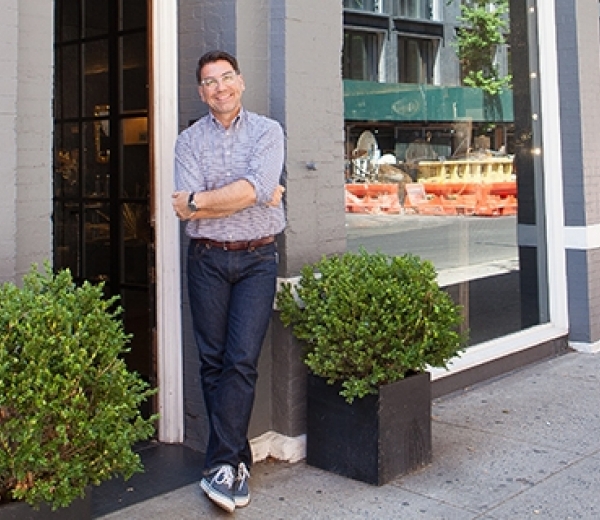 “My paternal grandparents were Genocide survivors, but they did not keep any records of their ordeal besides oral histories. They didn’t discuss their stories until much later in their lives. I was a teenager staying at their home one weekend with my brother and sister when we decided to make our grandparents pancakes for breakfast, a break from the sujukh (dried sausage) and eggs cooked in butter that was their usual fare. My grandfather said the pancakes were like the ‘khomor,’ the dough that they used to feed the camels on his farm in his village called Tadim, in the Elazig district of Turkey,” Michael recalls.

“I remember that we started fiercely asking questions because I had never heard them talk about what they referred to as the ‘old country,’ as though it were a thing of the past that one could never re-access physically or emotionally. My grandfather started telling us stories about his family, the separations, the murders, until my grandmother Mendouhi said, ‘Mugrdich, please stop!’ Right in front of us, they were arguing over the importance of transmitting the stories of their survival, and indeed, the survival of our family line. 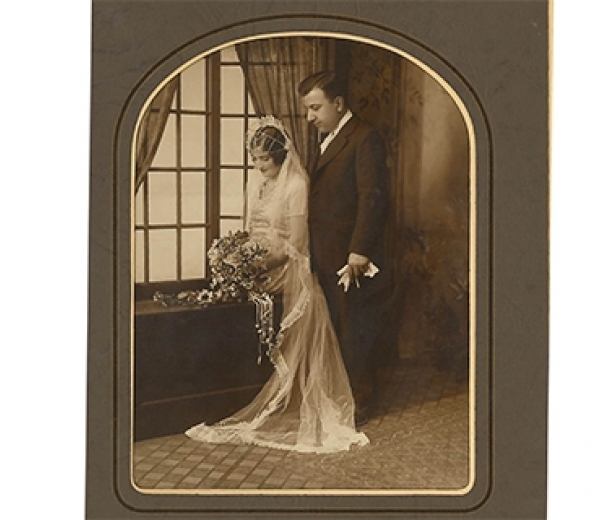 Quote:
My grandfather started telling us stories about his family, the separations, the murders, until my grandmother Mendouhi said, ‘Mugrdich, please stop!’
Text:
My grandmother started to tell stories about how she had to swallow gold coins and sew jewelry and other precious possessions into the hems of her clothes, how she hid in sewers and in trenches to avoid the Turkish soldiers. Ultimately, she was ‘smuggled’ to safety by being rolled up inside an Armenian carpet on a caravan. It was a story that was at once unbelievable and undeniable. It was a story that was emblazoned into my memory as a child.”
Michael’s grandparents lived in Watertown, Massachusetts, and his grandmother spoke Armenian both at home and in her neighborhood community. It was while staying with her daughter Rose during the last week of her life that she started to reveal more information about her life during the Genocide and her passage to America.
Her family owned a large import-export trading company in the city of Kharpert, where she had received a European education and was a child of privilege. Her father had died young, but her mother, Hripsime Keljikian, continued to run the business and prosper. She had sent her oldest children abroad before the events of 1915 but had stayed behind herself with her two youngest, Mendouhi and her younger brother Charlie. A cousin, Avedis Keljikian, also in the same business, had escaped persecution with the help of Turkish colleagues who encouraged him to change his identity to Mehmet Naci Kultchikli. His immigration papers to London stated both his assumed identity as well as “Avedis Karapet Keljikian.”
“Cousin Avedis was able to help other family and friends to safety through his wealth and a powerful network of sympathetic business associates.

My grandmother spoke of the power that ‘Naci’ had to help them and others, and how his Turkish contacts had guided her mother and her two children to 'safe houses.'

She also told the story about her mother being arrested and imprisoned because she would not reveal the location of young Charlie. She miraculously escaped prison, either through her own wits or perhaps with the help of influence, contacts or money,” Michael says. “Needless to say, she spoke of how the three of them would not have survived without assistance from a few Turkish people who helped them along the way. It took her family seven years to arrive from Turkey to Marseille and, finally, America. She met my grandfather in Watertown, where he worked at the hood rubber factory until he saved up enough money to open up a ‘spa,’ or what we would call a ‘convenience store and soda shop’ in Arlington. He and Mendouhi had three children, Rose, Albert, and my father, John. So in a very real way, without the help of Naci, my great grandmother’s cunningness and some righteous neighbors, my family wouldn’t be here today.”

Title:
The second part to the story
Text:

Michael Aram’s maternal grandfather was a descendent of Genocide survivors too. “My aunt Florence Wolohojian has kept impeccable family records. From her I learned that my great grandfather Vartres Yegavian (Egavian/Yegaviantz) was among the 200 plus Armenian intellectuals, poets, writers and prominent members of the Armenian community in Constantinople who were arrested and imprisoned on April 24th, 1915. He was never to return home or see his family again.” 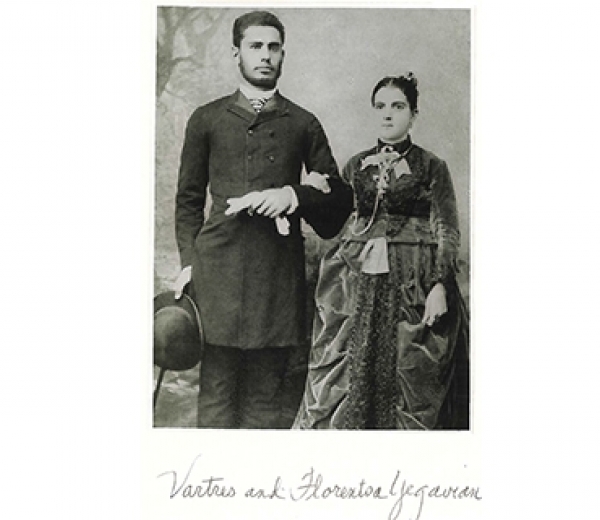 Vartres was from a family of wealthy businessmen and philanthropists. He had established his own business in Constantinople and had letterhead in four languages. He married Michael’s great grandmother, Florentza (Filaritza), in the mid 1890s. They had five children: Naomi (Noyemi), Michael’s grandfather George (Krikor), who, according to records, was born in Moscow in 1898, Anette, Edward and Larry. 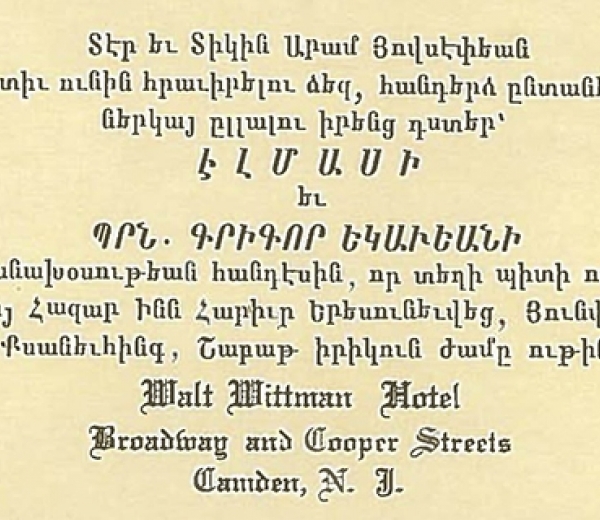 “The family lived in the European part of Constantinople called Pera. Their circle of friends included the Russian consul and his wife, Anette. They were the godparents to my great aunt Anette. The consul's dress sword was presented to my great grandfather and was among the family's prized possessions, along with some objects, photographs, letters and documents that they carried with them to the United States later,” Michael explains.

In 1907, Vartres and Filaritza were awarded the right to wear the rosette of the Red Cross by Her Majesty the Imperial Princess Eugenie Maximilianovna in recognition of their charitable activities.
Text:

This certificate, accorded to those under protection of Her Majesty the Imperial Princess Eugenie Maximilianovna of Oldenburg, is issued by the Saint Petersburg Committee of the Sisters of the Red Cross to Vartres Egaviantz for the right to wear the rosette of the Red Cross in his boutonniere and to recognize his charitable activities in support of the Committee. January 20, 1907. 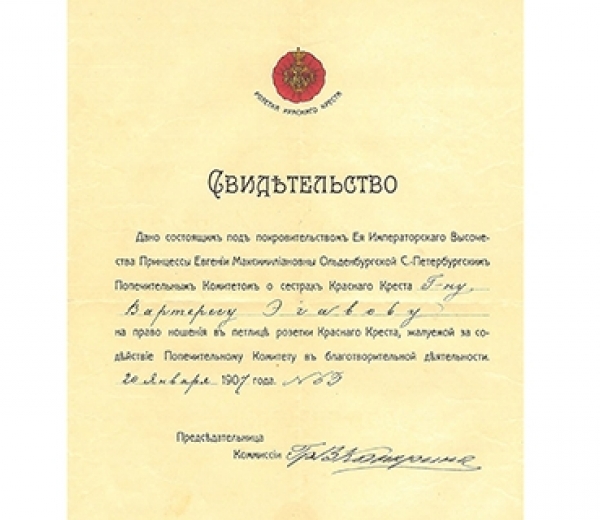 Despite his social position, like others Vartres would end up jailed in Urfa (now Sanliurfa in southern Turkey). In a letter to Filaritza in June 1916, Vartres’s brother Nazaret informed her that he was working with the American consulate in Aleppo to get Vartres moved to a prison in Aleppo.

Text:
He wrote that the American diplomats were helpful in requesting the transfer to the Turkish authorities but that they had not heard anything yet. There were letters from others advising the family on Vartres's condition while in prison. The last letter from 1916 said that on March 24th, 1916, exactly 11 months after he was detained, Vartres had died.
“In 1919 my great grandmother was issued a proclamation from the consulate of the Netherlands in Constantinople requesting Turkish authorities that Filaritza Egaviantz, Russian subject, be allowed to travel to Aleppo. She and the rest of the family must have been issued Russian passports through their diplomatic connections,” Michael believes.
Image: 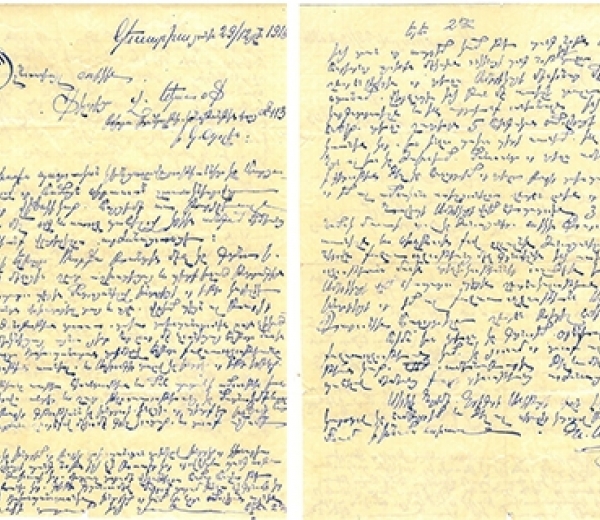 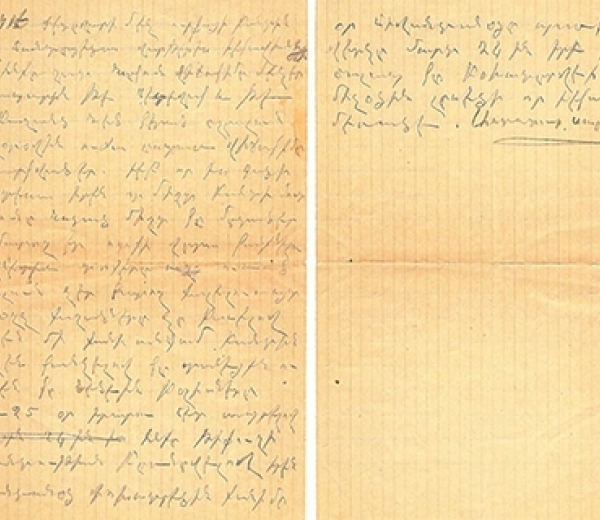 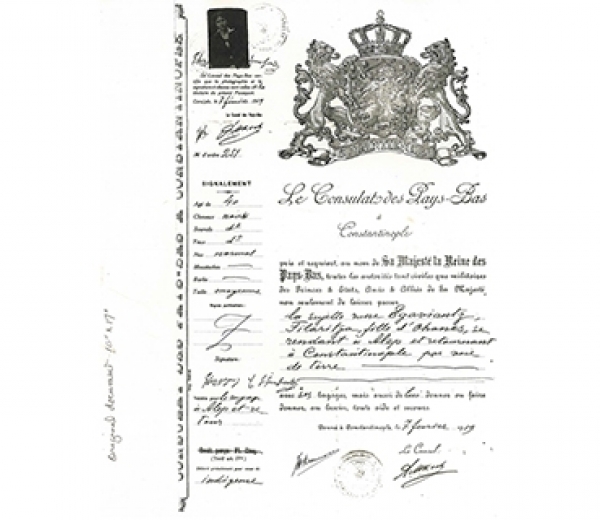 Quote:
The Consulate of the Netherlands in Constantinople requests in the name of Her Majesty the Queen...to allow the Russian subject Filaritza Egaviants to travel to Aleppo and return to Constantinople...
Text:

When she returned to her native Aleppo, she and her mother Isgouhi Yeramian became active in a newly formed League of Nations project to rescue women and children survivors of the Armenian Genocide involuntarily held in Muslim households. A rescue house was established in 1921 in Aleppo and run by a Danish missionary, Karen Jeppe. The organization recorded personal histories of the women and children, the locations where they were forcibly removed from, what happened to them and how they survived. According to Jeppe’s report at Brussels University in September 1923, the commission succeeded in freeing about 2,000 Armenian women and children kept in slavery or in harems.

Text:
The Egavian family Odyssey continued. In January 1923, Michael’s great-grandmother and her children George, Naomi, Edward and Larry left the port of Constantinople on board the SS Madonna and arrived in New York.
Having been trained as an electrical engineer in Constantinople, George founded his own Royal Electric Supply Company, along with his younger brothers Eddy and Larry, in 1930. In 1945, they started Eddy and Company, which became the distributor for RCA products – records, phonographs and televisions. The Egavian Cultural Center at the Saint Sahag's Church in Providence, Rhode Island, was dedicated to their parents, Vartres and Filaritza.
Image: 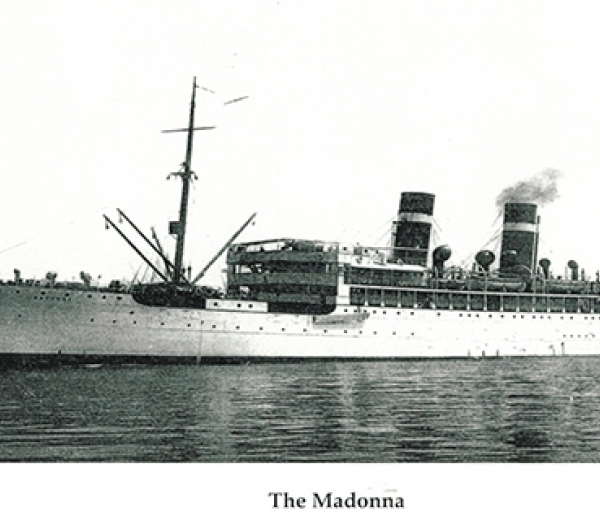 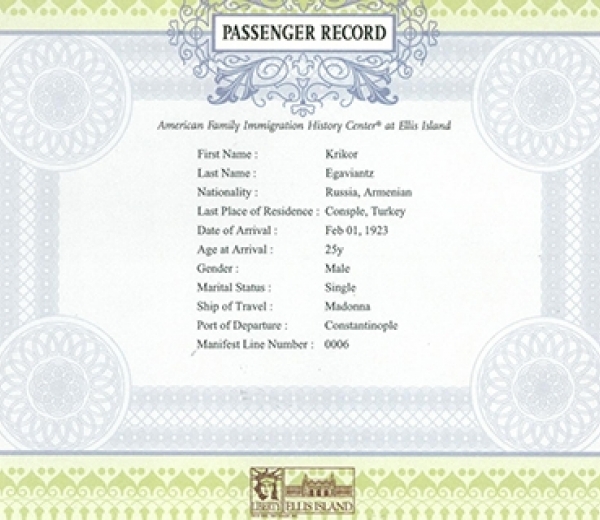 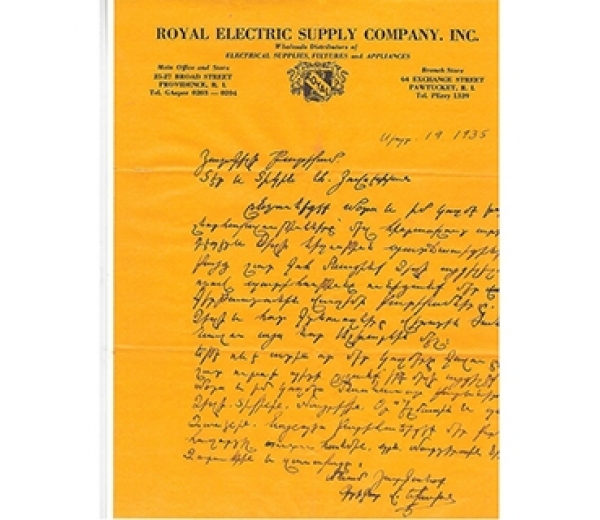 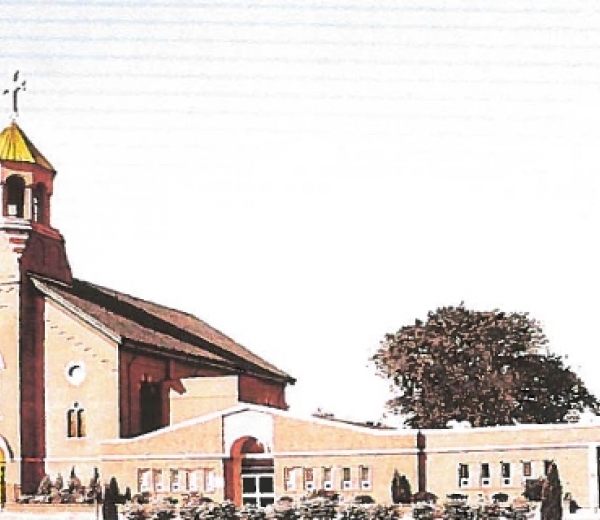 “My family is very traditional in many ways, and much like other families – except for the fact that we are an Armenian same sex couple. We are very involved in the Armenian community and had our son and daughter baptized at St. Vartan Armenian Cathedral. We also have a home in India, where I also have a workshop for my design work. It is perhaps at the workshop where I am most creatively satisfied and inspired,” Michael says. “I think my greatest achievement is creating a loving family and a business that supports many hundreds of other families around the world.” 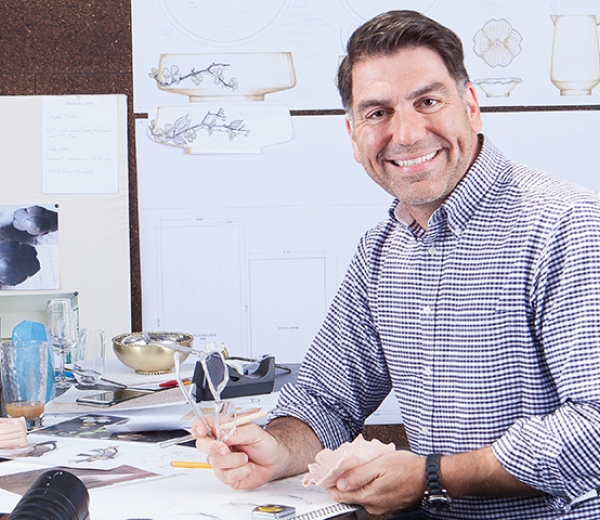 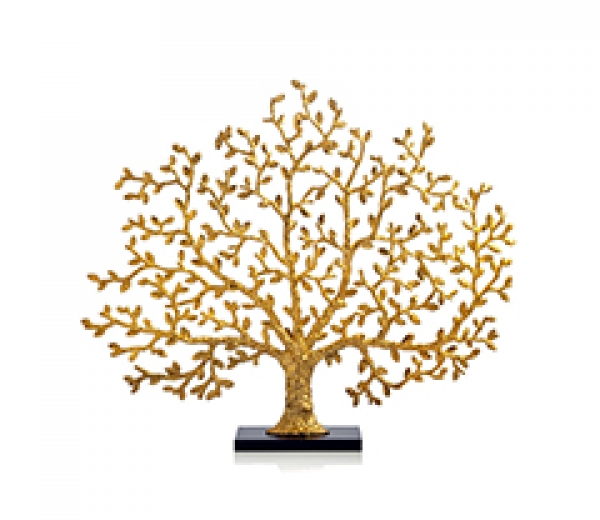 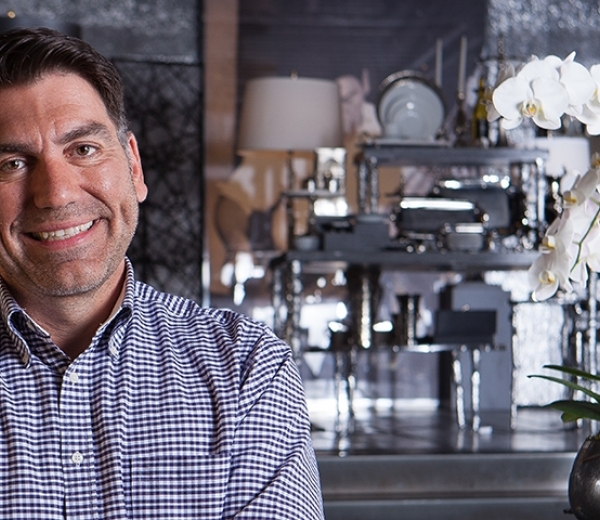