Submitted by global publisher on Fri, 07/31/2015 - 10:33
English
Intro:
His father named him Antranig in memory of the Manoukian tribe patriarch, who fought as a fedayi under the renowned General Antranig. He goes by his second name, André, but his fans affectionately call their favorite TV presenter “Dédé.” By blood he is 100 percent Armenian, minus the melancholy.
Weight:
-80
Related content:
Edward Djerejian
Sesede Terziyan
Eric Bogosian
Tags:
Survivors
Story elements:
Title:
He chanced
Secondary Title:
upon his heritage
Tertiary Title:
through jazz
Text:

His father named him Antranig in memory of the Manoukian tribe patriarch, who fought as a fedayi under the renowned General Antranig. He goes by his second name, André, but his fans affectionately call their favorite TV presenter “Dédé.” His disarming smile, five o’clock shadow, sparkling green eyes and a penchant for provocations have helped this extraordinary pianist and composer secure a lasting legacy in the history of French media. Already a grandfather at 58, André Manoukian spends his time between his estate in Chamonix and Paris, where he works. By blood he is 100 percent Armenian, minus the melancholy.

Quote:
By blood he is 100 percent Armenian, minus the melancholy.
Text:

However, he has no time for communitarianism, and that’s because he hails from the post-1968 libertarian generation. Back in those days, André chose his tribe among the baba-cool (hippie) leftists. His Armenian side he chanced upon through jazz: the year 2007 was the year of Armenia in France, and thanks to his fame as presenter of the “Nouvelle Star” TV show (the French equivalent of “American Idol”) Manoukian was invited to partake in a show about the Armenian Diaspora. He was hard-pressed when the producer asked him to play something Armenian, but a distant memory of a song his grandmother Haïganouche used to sing resurfaced and he improvised it on the piano – bits of melancholy, spleen and blues. Something long-lost but indestructible had come forth in André, giving birth to his “Inkala” jazz album inspired by Armenian tunes.

A romantic artist, André would like to concoct a new past. To him the irreparable harm of the Genocide, portrayed in Fatih Akin’s film “The Cut,” felt like a slap in the face.  What did he find the most moving? The first five minutes of the film: seeing Armenians living in peace and understanding with their Turkish neighbors. “The Genocide eradicated that past,” Manoukian believes. His role model is Hugo Pratt’s comics character Corto Maltese, an adventurous sea captain and a "rogue with a heart of gold." He wants to choose his own fate and step out of the shadow his bloody heritage casts upon his identity. 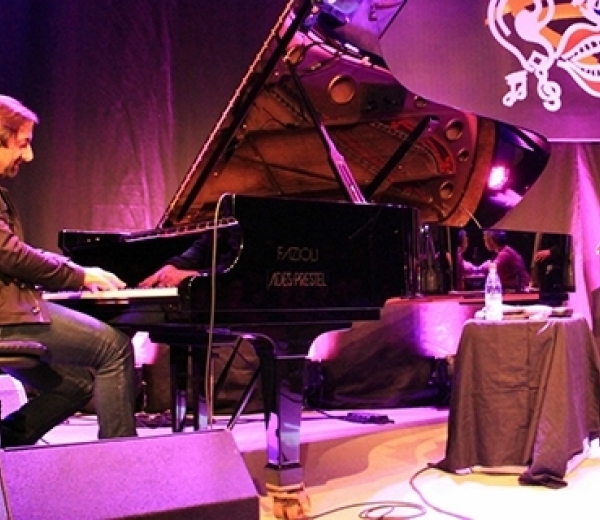 André’s origins on his mother’s side are in western Anatolia – his grandmother’s father, Delerian, was mayor of Adapazar, a town east of Istanbul. That side of the family did not witness the atrocities of the Genocide – they felt the winds changing and “fled before it started,” Manoukian explains. 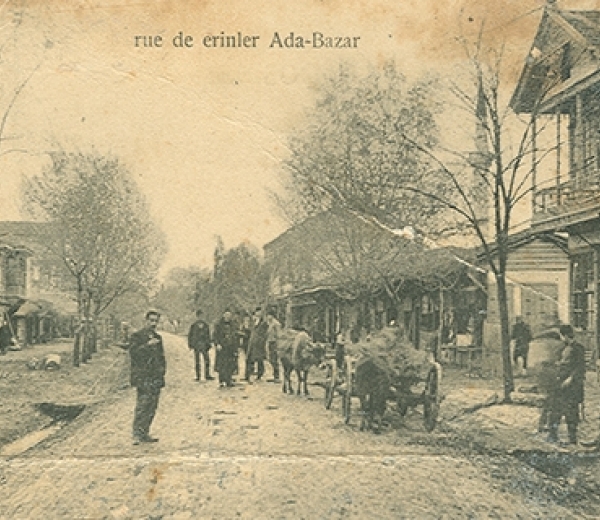 Quote:
That side of the family did not witness the atrocities of the Genocide – they felt the winds changing and fled before it started.
Text:

His paternal grandfather, Antranig, had no such luck. Born around 1894 in Amasya, in the north of Anatolia not far from the Black Sea, he was married to Haïganouch Mendjikian and had two children – a boy and a girl, on the eve of the start of World War I. He was drafted into the Ottoman army in 1914, sent to fight on the Russian front and taken prisoner after the Ottomans’ defeat at Sarikamish in January 1915. Being Christian did not help – he was interned in a camp in eastern Siberia, a stone’s throw from the Chinese border. 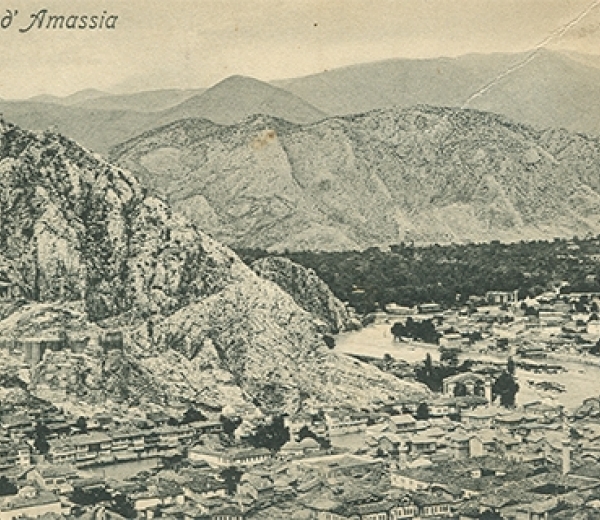 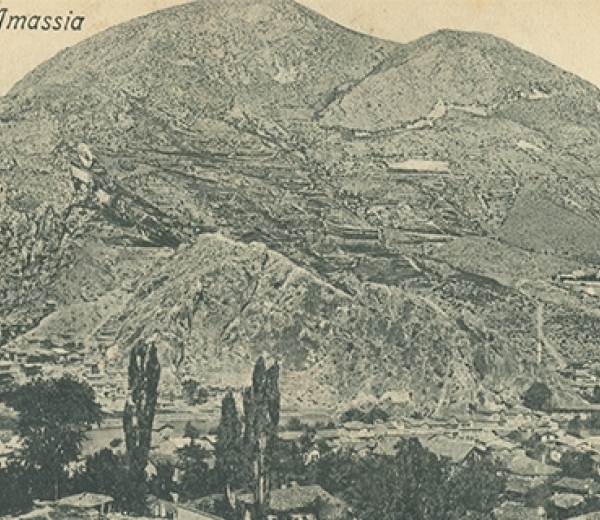 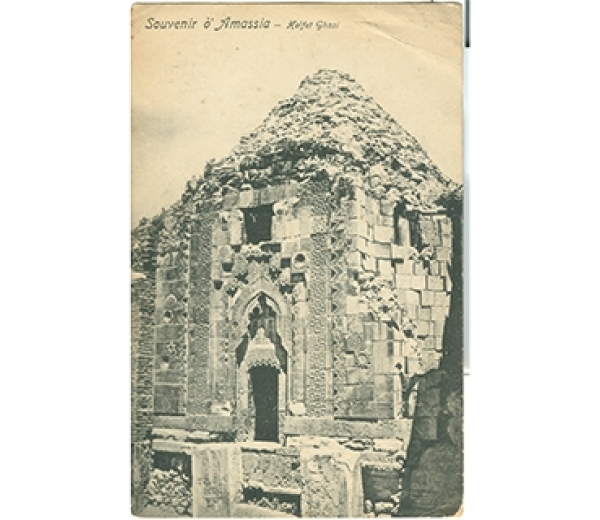 Here he worked as a tailor and learned to speak Hungarian and German by befriending other prisoners. One day, a German officer suggested that they cross the border into China and seek out a German consulate. The two escaped, but while being chased by a crowd in a nearby Chinese town for stealing dried fish, they happened upon Russian guards and were taken back to the camp. After the Bolshevik Revolution of 1917, Antranig, like many other war prisoners, was set free. He got on the Trans-Siberian railway and arrived in Odessa 32 days later, working as a tailor during stopovers to pay for the journey. He went to the port and managed to get on a ship out of Russia.

Antranig headed to Ottoman Turkey and scoured Anatolia in search of his family, passing himself for a Greek. However, his new identity did not serve him long, and he was soon arrested in Konya. “Every day, a guard came and took two the prisoners to help in kitchen, and the men never came back…” Manoukian recalls. This made Antranig so afraid for his life that he escaped once again and managed to join General Antranig’s Armenian fighters in the far east of the empire. With the general’s fighters forced to retreat to Eastern Armenia, Antranig ended up back in Russia once again.

Meanwhile, his children and his wife Haïganouche, along with her parents and her seven sisters, had been deported from their hometown.

With the exception of Haïganouche and her sisters, everyone soon perished in the death marches to Syrian deserts. Haïganouche and her sisters used all kinds of strategies in order to survive: Haïganouche covered her sisters’ faces with mud to protect them. She narrowly escaped rape herself, pretending to be mad to scare the attackers away. They arrived in Deir ez-Zor at the end of World War I and soon found refuge in Bulgaria with help from the Red Cross. Antranig’s uncle, Agop, already lived there. 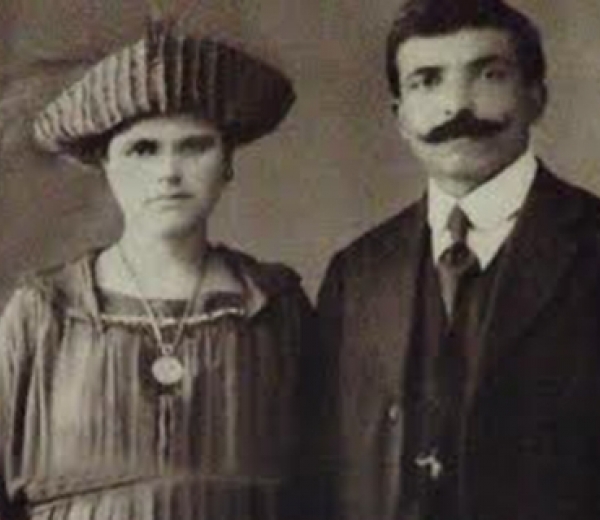 In Russia, Antranig saw one of the many notices posted by the Red Cross, stating: “Agop Manoukian seeks members of his family.” He went to Bulgaria, found his family and moved them back to Turkey. Together they settled in Smyrna (now Izmir), where he opened a tailor’s shop. Business flourished with as many as 35 sewing machines at his disposal. His son Arthur was born in 1920. 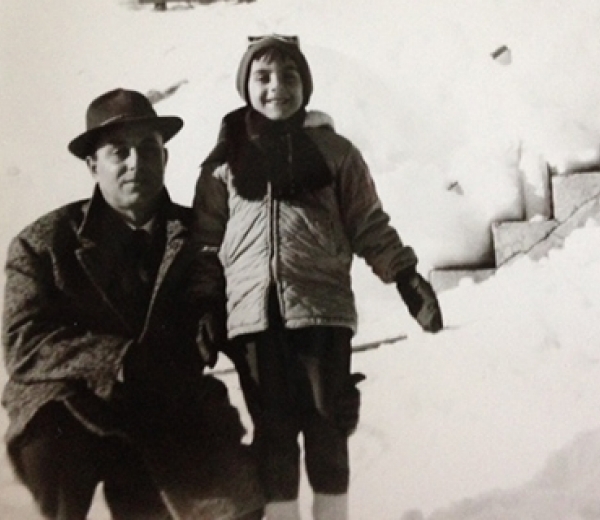 Life had gone back to normal, but not for long. As the Greco-Turkish war raged on, Antranig once again put on his soldier’s uniform. In September 1922, Turkish General Mustafa Kemal’s forces captured the city and set Armenian and Greek quarters on fire. The Manoukian family, separated from Antranig, narrowly escaped on a boat. Arthur, then three years old, still remembers how, amid the flames, the family embarked on a French ship leaving for Greece.

Demobilized, Antranig again went looking for his family. He found out from the Red Cross that his wife, son and sisters-in-law were in Greece, at a refugee camp in Larissa. One day, as the family sat at the dinner table, little Arthur saw the door open. A tall man with a thick moustache, wearing a big Russian-style jacket and an Astrakhan hat, came in.

Everyone was frightened: Haïganouche screamed, the sisters ran to the back of the hut and cried. That was Arthur’s first memory of his father, Antranig.

Arthur’s sister, little Takouhie was born in Greece, and for two years the family lived crammed in a tiny shack, until one day an employee of the Aubenas spinning industry came looking for workers. At the end of the war France was in dire need of men and recruited however and wherever possible. Thus the family left to work in Ardèche in southern France, before moving to Nice and, finally, Lyon.

Arthur grew up amidst traumatic memories of the past. As a child he shunned family reunions, where, according to André, oriental pastries accompanied horrific tales “of massacres, rapes, the bellies of pregnant women being cut open, fathers decapitated in front of their sons, children impaled alive.” Arthur took special care to later spare his own two children from these horrors.

André and his sister Marie Anne grew up with their grandmother Haïganouche in the Croix-Rousse area of Lyon. Their paternal grandfather raised them speaking only Armenian, the language of affection. As a result, little André found his kindergarten teacher “not too intelligent, because she doesn’t understand everything I say,” he recalls. While his school friends were out roller-skating, André was forced to attend Armenian school, where he began piano lessons at the age of six. He could count on his father, who played both the piano and the violin, for help and inspiration. His father also introduced André to classical music at a young age. 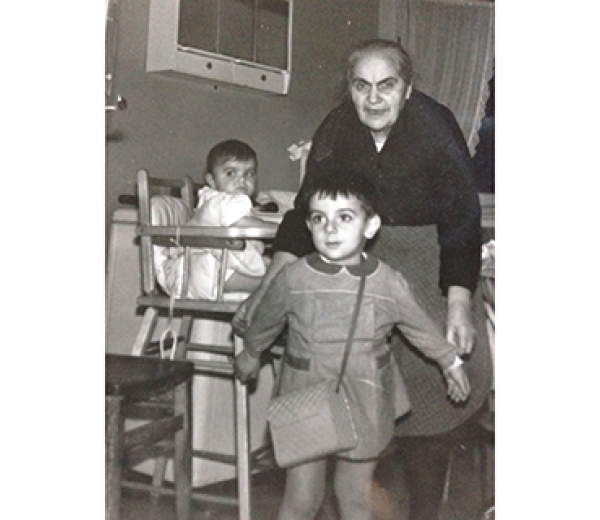 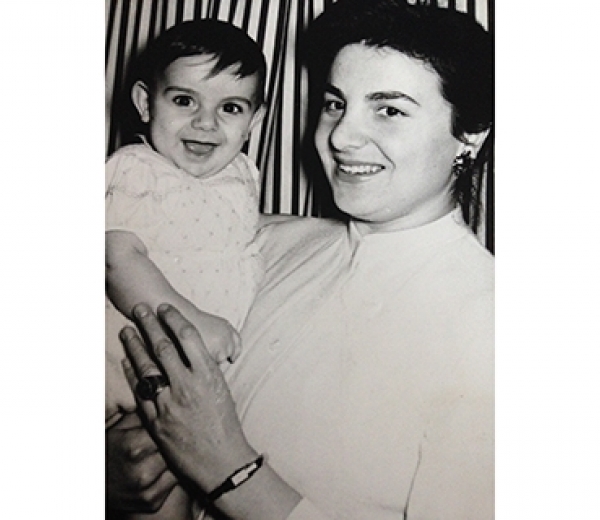 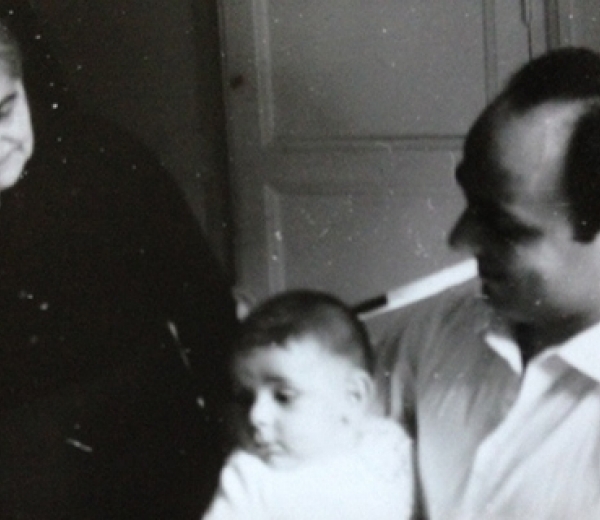 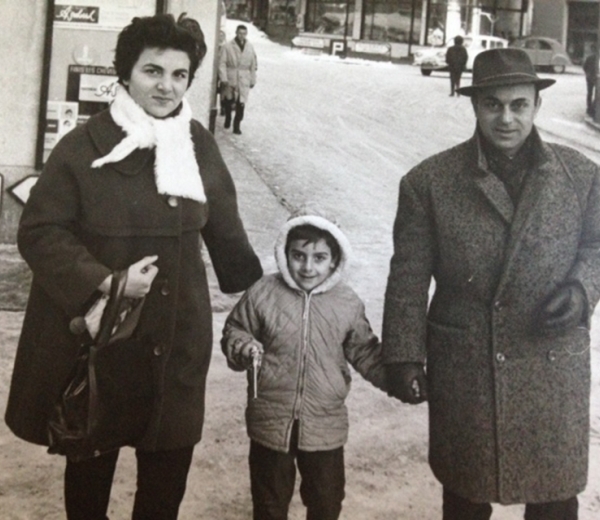 Title:
At the heart of the centennial
Text:

André was present when history was made on April 24, 2015. He, who was first made aware of the profound historical implications of the Genocide and awakened to the innate complexity of his heritage by the terrorist attacks carried out in France and elsewhere in the 1980s by ASALA, an Armenian militant organization whose goal was to get the Turkish government to publically acknowledge the Genocide, pay reparations and return lands, was now part of President Francois Hollande’s delegation bound for Armenia.

“It was a bit strange, almost comical. We left for Yerevan at midnight. When Hollande entered the plane, we skipped our meal so as to greet him. When we got there at six a.m, we heard him improvise a beautiful speech at the French embassy. He emphasized how fortunate France was to have Armenians,” Manoukian said.

The French delegation was late to the official commemoration ceremony at Tsitsernakaberd and landed right in the middle of the show. André headed the procession, next to famous French-Armenian signer Charles Aznavour. “I’d never seen so many cameras!” he exclaims.

A journalist came up to them, stuck a microphone in their faces and asked point blank: “I’m Turkish, what do you have to say to me?” Aznavour opened his arms wide and answered “Welcome!”

“It was very moving,” Manoukian recalled.

Title:
To be Armenian is…
Text:

To André, being Armenian means understanding others, being curious and having an indelible will to survive and move on. Can an Armenian be happy in the 21st century? The answer is an unequivocal “yes, on condition they reconcile themselves with the past,” he believes.

André encountered Armenia by chance on that most luminous of pathways – music. Since then he has realized that although Armenians welcome him as a prodigal son, the land of his ancestors is where Turkey is today. He no longer fears going to Istanbul at the invitation of his musician friends. 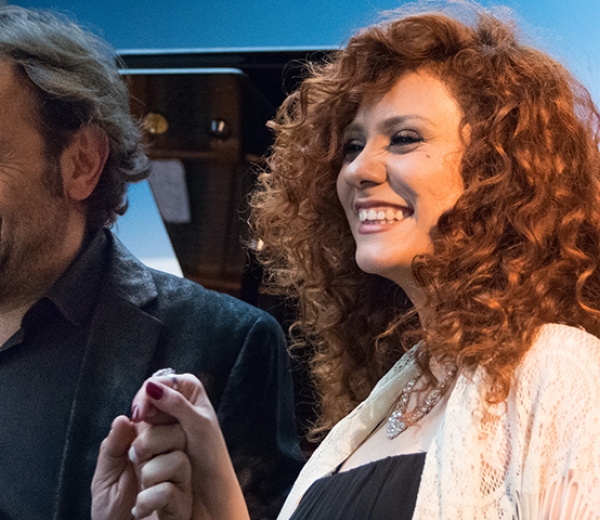 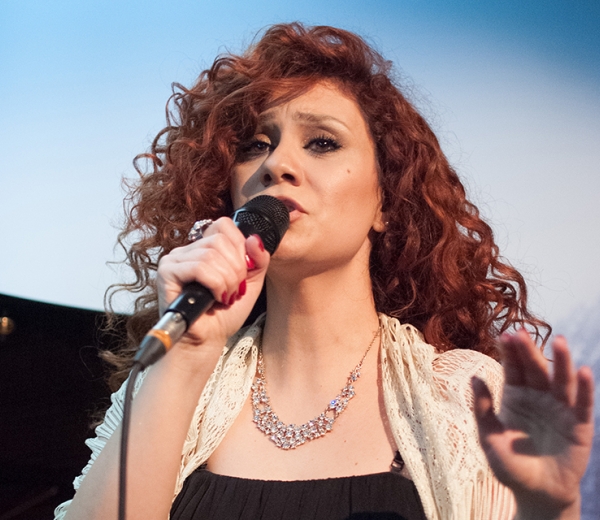 André’s artistic encounter with the great Syrian jazz singer of Armenian origin, Lena Chamamyan, was perhaps one of the most beautiful events of his life in the past few years. She from the Orient, he from the West, this centennial year they put their Armenian sensitivity and talent to serve a cause beyond themselves. They have common origins and share the same fascination with their Ottoman heritage. And the slow awakening of Turkish civil society gives them support in their quest.

Lena Chamamyan and André Manoukian performing a song composed for their upcoming project. 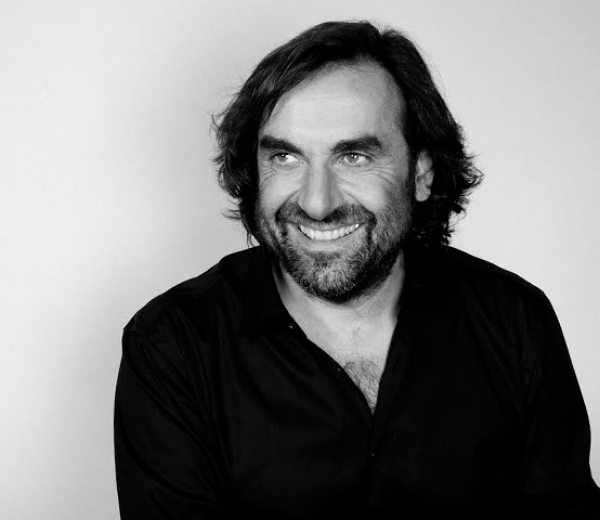