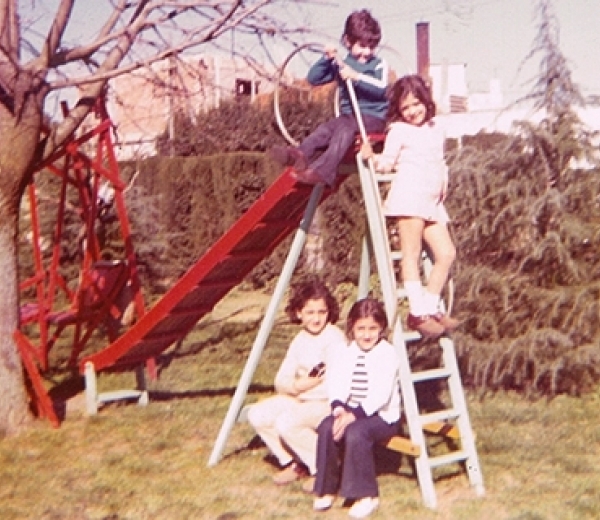 When the last ingredient goes into the pot of sarma, a traditional Armenian dish made of ground meat, Silvina shouts in excitement: “Mommy, look, the chopped-down tree is blooming again.” The women gather at the once-lush pomegranate tree. Elena had chopped down the second pomegranate tree to make more room in the yard. To the astonishment of the entire family, the trunk produced new flowering shoots after a few months.

Levon had planted the pomegranate trees in the yard years ago as a token of his gratitude. 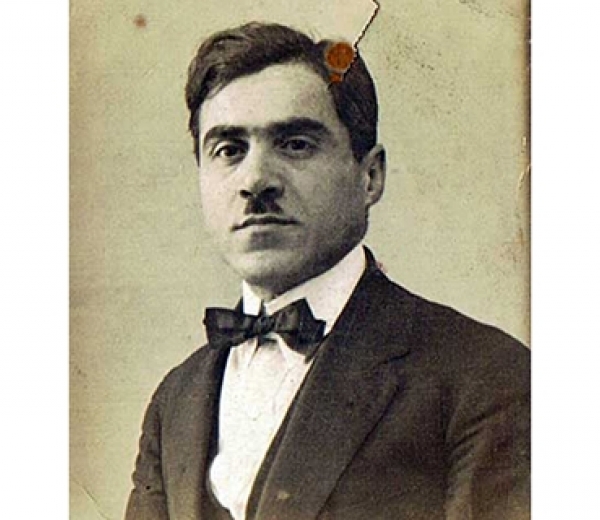 Text:
Levon Der-Meguerditchian
Levon and the Pomegranate Tree
It is the beginning of the 20th century, the breakout of World War I. All across the Armenian Highlands, today’s Anatolia, large-scale deportations are happening.
The ground feels cold and dirty. A young man of 20 years is trying to recognize other faces in a cramped and poorly lit room among Armenians, Kurds and Arabs. Arrested, like him, they do not know what fate lies in store for them. Levon blames himself for not leaving his village earlier. He had escaped death once before, at the age of five. When gendarmes came knocking on their door, his father hid him in a wardrobe. That day Levon lost his father.
It was a difficult decision to leave behind his father’s fields and the prospering grocery store. Every day, Levon he would ride out on his white horse to check the fields. The Der-Meguerditchian family was known in Marash (now Kahramanmarash in south-eastern Turkey). The people liked Levon and called him “the rider on the white horse.”
Image: 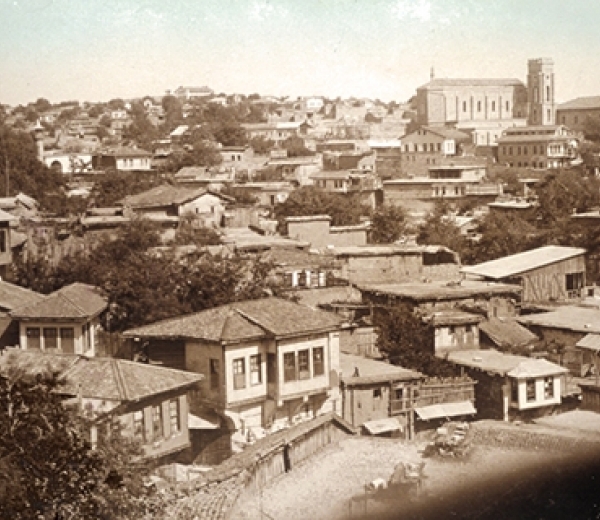 Text:
Marash
Levon listens closely when a guard shouts an Arab name at the crowd. “Which of you is Azmi Chalid? You’re free to go.” There is no reply. When the angry guard calls out the man’s name once more, Levon seizes the opportunity. “That’s me,” he says in Arabic. It won’t be the last time that proficiency in many languages, including French, saves his life.
His heart pounding, Levon follows the guard toward the exit, but the gendarmes quickly realize they let the wrong man go. Trying to escape, Levon squeezes himself tight between the thick branches of a pomegranate tree.

With grazes all over his legs and arms he dare not budge for three days, feeding on the tree’s fruit, until the search for him is abandoned.

Istanbul – The 1920s
A long and perilous journey takes Levon to Istanbul. He wants to work for the French, who could shelter and protect him. He is given papers by the authorities of the French protectorate and allowed to move about the city freely, but news of constant massacres of Armenians and the idea of having to leave his home country for good scare and depress him. The Treaty of Sèvres, signed in 1920, gives a glimmer of hope that is soon extinguished by the Treaty of Lausanne, legalizing the forced migration of Armenians and other Christians. At this point there is no future for Levon in Turkey, so he boards a ship for Marseille.
Levon and Aghavni
In Marseille, Levon takes a job at the French company Renault. After a few months his savings enable him to move to Paris and open up a bedclothes boutique on Rue du Cherche-Midi. The feeling of being in constant danger wears off, and Levon feels ready to start a family.
Image: 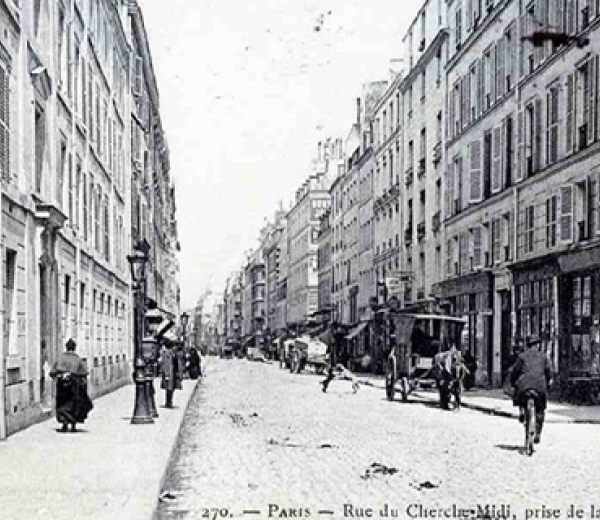 In 1927 he meets a beautiful girl from Sebastia (Sivas, Central Turkey). Aghavni’s father, a smith, was murdered prior to 1915. She, her mother and her three siblings were sent into the desert. Aghavni Tengerian and her sister were the only ones to survive the death march. She watched her mother and her younger siblings die of exhaustion, thirst and starvation.

Aghavni might have suffered the same fate if a Turkish family hadn’t taken her in. As a maid she had lots of work to do, but also a roof over her head. At that time she acquired a habit she kept all her life: in order to remember who she was, she would write her name and origin on small pieces of paper, roll them up and hide them in order to read them the next day.

In 1919 – large-scale death marches and World War I had ended – relief organizations launched a search for Christian orphans, among them children who had been taken in by Muslim families. Thanks to Aghavni’s ingenious method of protecting her identity she was found in an orphanage in the Lebanese capital of Beirut by her uncle, who had immigrated to Boston before the turn of the century. Like her sister Shnorhig, who had been taken in by a Kurdish family, Aghavni was to travel to Boston via Paris, but her journey ended right there. She met Levon and married him later the same year. In 1929 they had their first child they named Anahid. 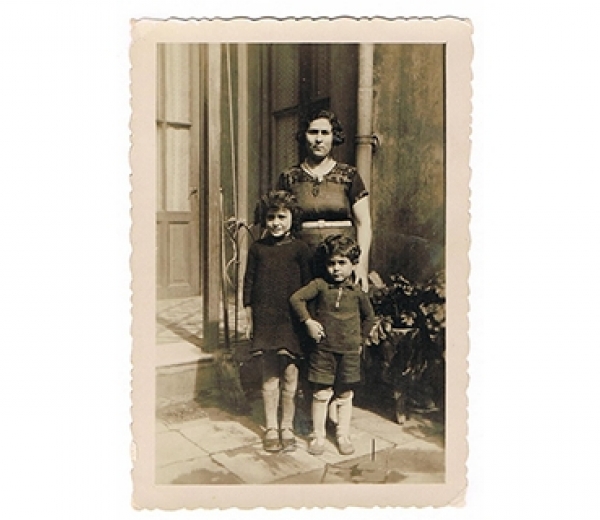 World War II and the Favela of La Boca
In 1930, after six years in Paris and with another war looming on the horizon, the Der-Meguerditchians leave France for good and arrive in the Buenos Aires neighborhood of La Boca, a favela inhabited by Italian immigrants. In the 1930s Argentina was known as one of the richest countries in the world, which made it a popular destination for immigrants.
Back in the day only few were prepared to live in favelas such as La Boca, but the Der-Meguerditchians had no choice. They are forced to live in a conventillo – a dwelling made of corrugated iron erected for the new immigrants – in difficult and unsanitary conditions. Levon earns a livelihood as a cab driver, but is eventually able to open up a small shop in the Buenos Aires suburb of Claypole thanks to dedication and hard work.
Image: 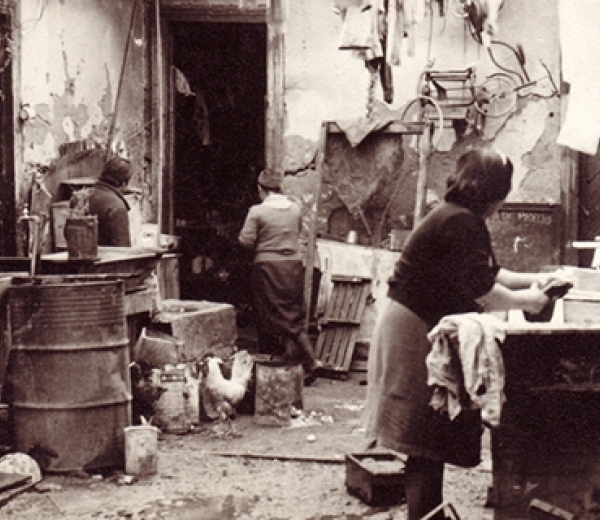 Text:
La Boca in the 1900s
Hovhannes, the Dreamer
In 1932 their first son, Hovhannes, is born. With two employees, the Der-Meguerditchian family is doing better and better. When their youngest son, Mkrtich, is born seven years later, they are able to offer him a much better life. They had moved from La Boca to the more prosperous suburb of Claypole, where they owned a beautiful house with a big garden.
Hovhannes is an esteemed member of the church choir, which is where he meets his future wife, Elena, at the age of 32. Elena is a teacher and comes from an Armenian family of artists in Aintab (modern-day Gaziantep in south-eastern Turkey). Three months prior to the marriage Levon suffers a heart attack and Hovhannes takes over his father’s business.
Image: 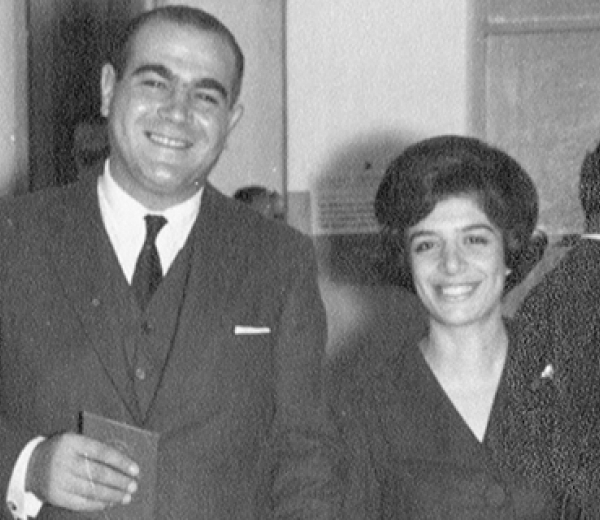 Text:
Levon's son with wife Elena
The wonderful smell of sarma brings Aghavni back from her trip down memory lane. The table has been laid. Aghavni enjoys days like this a lot. For her, the 1970s are a time of security and peace. They have arrived in Argentinian society. Today they speak Spanish and lead a well-ordered life.
Silvina’s life, however, takes an unusual turn. In 1990 she presents her future husband, Oliver from Berlin, to her grandmother Aghavni (who died the following year). When they meet, Aghavni says to him, “You have picked the most beautiful flowers of all flowers.”
Today Silvina Der-Meguerditchian is a highly regarded artist. In her works she concerns herself with Armenian history and identity. She lives and works in Berlin.
Read more about Silvina Der-Meguerditchian here.
The story is verified by the 100 LIVES Research Team.
Subtitle:
From whence comes art
Story number:
24
Header image: 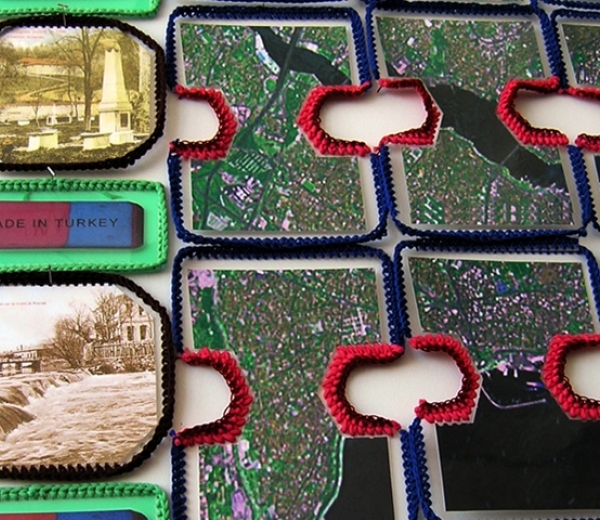