Ziad Kmeid: “We Empower People to Rely on Themselves Again”

On August 4, 2020, a huge explosion rocked the capital of Lebanon, killing more than 200 people and leaving thousands injured. Standing in solidarity with the Lebanese people, Aurora pledged to donate $200,000 to support the citizens of Beirut and launched an online fundraising campaign for the Armenian community of Beirut through #AraratChallenge, Aurora’s global humanitarian crowdfunding platform. With more than 75 years of experience in economic development work in Lebanon, the Near East Foundation is currently involved in livelihoods recovery efforts in Beirut. We talked to Mr. Ziad Kmeid, NEF’s Country Representative in Lebanon, about the nation’s road to recovery.

– Being on the ground, how would you describe the current situation in Beirut?

For now, we have around 200 people reported dead and more than 6,500 injured. Based on the UN numbers and the government numbers, we have at least 150,000 people who lost their houses. And the number of missing people is still not very clear for now.

The damages are really huge. According to scientists, this explosion is rated as the third or the fourth biggest explosion in the world, after Hiroshima and Nagasaki, so you can only imagine the level of damage. Not only houses but lots of infrastructure, be it healthcare or other types of services, are really damaged and not able to provide services anymore.

After the blast, the NGOs and INGOs were mainly focusing on the urgent needs, but it was not very organized, as there was no coordination mechanism. We noticed lots of duplications in assistance initially because these actors were not coordinating with each other. Right now, it’s much better than before, but still we have some work to do in terms of working on unifying the coordination – especially as it relates to the needs and challenges of rapid livelihoods recovery.

– Dealing with the aftermath of such a tragic event must be especially hard in times of pandemic. How has it affected the recovery efforts?

At around two weeks before the blast we started to witness sharp increases in the number of people infected with COVID-19, and the hospitals were reaching their capacity. They were already struggling to provide medicine and proper materials because of the economic crisis, and then they witnessed a sharp increase of cases – from 20 cases per day to 500 cases per day.

Imagine that on top of that, you have the blast that destroyed three hospitals that couldn't operate anymore, and other hospitals were overwhelmed with treating the injured. There were injured people being treated at the entrance of the hospital, at the reception office, at the secretary office because there was not enough space at the hospitals. So definitely COVID-19 complicated things in the aftermath of the blast. However, hospitals are more or less able to cope with these cases now, given that most of the injured in the blast left the hospital.

Between the pandemic, and the ongoing economic and banking crisis, there isn’t a shortage of challenges we have to navigate. All of which makes the need for livelihoods recovery ever more urgent, so that people can earn and sustain a living to take care of their family’s needs, without developing a long-term dependency on emergency aid. This won’t be sustainable in the long-term.

– What are the programs being currently implemented by Near East Foundation’s Beirut Explosion Livelihoods Recovery Fund and what do they focus on?

From the beginning, we pushed early livelihoods recovery and focused on supporting the people who have been affected by the blast to help them resume their income-generating activities and to be able to rely on themselves again.

So first of all, we support vulnerable small entreprises, such as a barber shop or a butcher who cannot operate because they have been affected by the blast. When providing the support, we always assess the needs of the person to make sure we provide the help they actually need. For instance, during our assessment one butcher told us that all the glass was broken in his shop and he also lost his fridge. One of the organizations helped fix his glass, but no one bought him a new fridge. And he said, “If I have a new fridge and no glass, I can operate, but with the new glass and no fridge I cannot operate!” So that is why our focus is on helping them so they can re-open as soon as possible and start making a living again.

Second, we help vulnerable skilled workers who lost their job because of the blast by providing them with the needed materials to resume their work and link them with vulnerable families who are in need of home repairs so they can provide their services for free. Then NEF pays these skilled workers directly. So, it's like a win-win situation.

The third type of support, which we will work on later because it's a more medium- and long-term initiative, is helping those who used to work at the port and lost their jobs after the blast. We are exploring a vocational training component to support vulnerable people who have lost their jobs due to the blast, helping them diversify their skills in relation to market needs and link them to employment.

So these are the three areas that NEF is currently working on with our local partners, in coordination with local and international stakeholders, and with the support of our funding partners, like the Aurora Humanitarian Initiative.

– Obviously, you have some short-term and long-term goals. When you do you expect to see the first impact and what should be done to maximize it?

For the first three months, we will be mainly concentrating on identifying the vulnerable skilled workers and vulnerable small and medium-sized businesses, assessing their unique needs, and providing them with the support. The three months after that will be used to follow up with these beneficiaries to see if they need some additional technical support, because the support we're planning to provide is not only financial and material, but also technical. After that we will be measuring impact and then, of course, proposing a way forward to achieve the long-term goals.

A lot of support has been received, but unfortunately, more is needed – especially in regard to rapid livelihoods recovery. A lot of support is required to overcome the damages, and on top of that the impact of the economic and health crisis, so that's why we need the international community to help Lebanon recover and rebuild and help people access the resources they need to do so in a sustainable way.

Please support the people of Beirut by joining the international fundraising campaign and making a donation here.

Subtitle:
Interview with Near East Foundation Country Representative in Lebanon, about the nation’s road to recovery, after the blast that rocked Beirut in August 2020.
Header image: 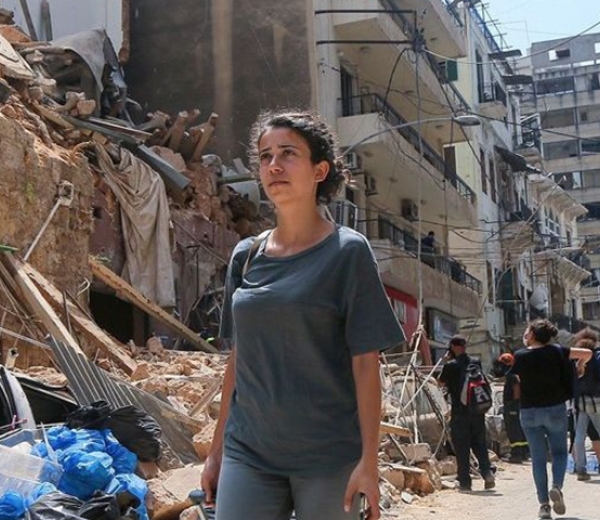