VENICE, ITALY/ Making the journey to the island of San Lazzaro degli Armeni at the Biennale di Venezia meant deviating from the beaten path: most visitors followed a circuit through the Giardini, the Arsenale and the central streets of the City of Water. “Venice itself is an island, and the question of logistics is an important one, but San Lazzaro is an island next to an island, which means that everything gets even more complicated,” said Nina Katchadourian as we traveled by “vaporetto” to the island monastery. She is part of the “Armenity” exhibition, which received this year’s Golden Lion, the main prize of the Biennale. 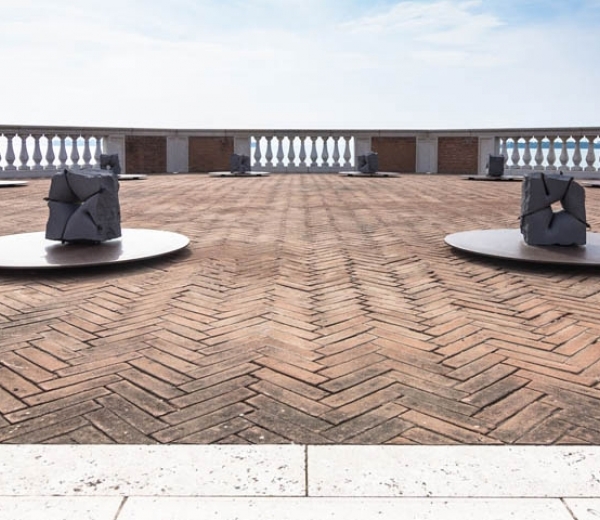 Nina is a good example of a “compound” identity, which actually defines the modern Armenian people and their history. Her father is an Armenian born in Turkey, her mother belongs to a small group of Finnish Swedes. Nina herself was born in the United States, lives in New York and speaks unmistakable American English. This geographic and linguistic diversity inspired her project, in which she explores the idiosyncrasies of various accents. 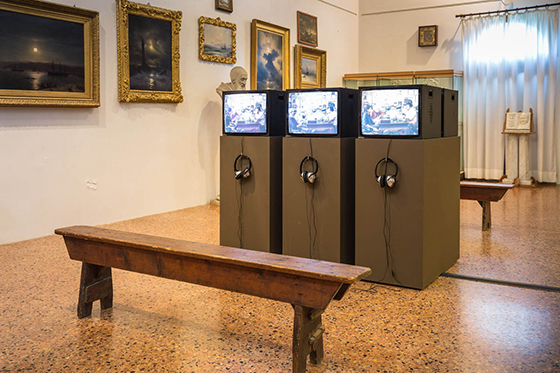 Three television screens facing the audience show Nina, her father and her mother. The artist asks her parents a series of deliberately naive questions (to which she, no doubt, has long known the answers). Through this staged interview the audience learns about the dramatic history of Armenians who used to live in Turkey, the fact that Nina’s parents met in Beirut, that her mother is also a member of a minority at home and that as a result of his speaking Armenian, Lebanese, Turkish, English and French, her father’s accent had become so unrecognizable that many assume he is Hungarian. At one point all three speak at once, giving the viewer a chance to note the differences in pronunciation.

Behind them are three other television screens showing Nina and her parents meet with a pronunciation coach, who promises to rid them of their foreign accents. But the result is hardly satisfactory and probably unnecessary: for the artist, the story of her parents and the Armenian diaspora as a whole is encoded in the awkward sounds and characteristically imperfect accents.

Nina’s installations, like those of the other 16 artists, is located on the grounds of the monastery of San Lazzaro degli Armeni, founded at the beginning of the 18th century by the monk Mkhitar who fled the Ottoman Empire and converted to Catholicism. The monastery quickly became a major global center of Armenian culture. It was there that the first book in Armenian was published in 1512, and the monastery print shop evolved into one of the largest European centers of publishing. 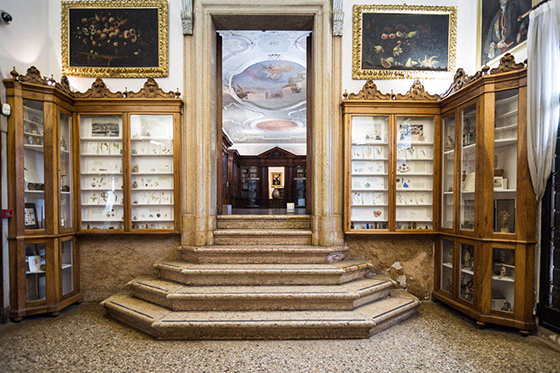 The monastery’s collection contains paintings (including several paintings by Ivan Aivazovsky, whose birth name, as the monk guides are eager to point out, was actually Aivazian), religious objects and works of decorative art made of precious metals. The cabinets that contain these things also have “treasures” of a different kind: bowls with herbs, minerals and sheets of paper with illegible writing. All of them are part of the installation by Silvina Der Meguerditchian. In the mid-20th century her great-grandmother, who sought refuge from the Genocide in Argentina, published a collection of hundreds of medicinal recipes known to Ottoman Armenians. 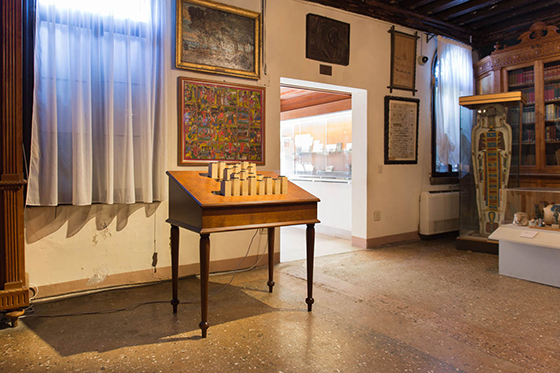 In the early 19th century George Gordon Byron (also known as Lord Byron) came to the monastery to study Armenian history and language in its vast library, which contains hundreds of thousands of volumes and manuscripts. He called Armenian “the language of paradise lost.” The artist Hera Buyuktashian from Istanbul makes a play on this phrase in her installation called “Letters from Paradise Lost,” located in the room where Byron was staying. Buyuktashian spells out the title of her exhibit using Armenian and English transliteration, placing each letter on a wooden block. The blocks themselves are assembled into a kind of musical instrument – they slide up and down, making a shrill, raspy sound. 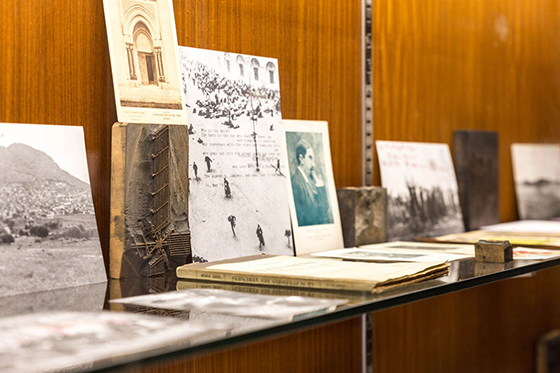 Following Byron’s example, the creative duo of Rene Gabri and Irene Anastas pored over the monastery archives. Their installation, “When Counting Loses Its Sense” (2015), is a collection of photographs, collages, cards, documents and drawings that resulted from the artists’ attempt to correlate the story of the Armenian Genocide with the concept of art as such. Much like the French philosopher Gilles Deleuze, Gabri and Anastas view art as an act of resistance and a chance to get closer to the truth. 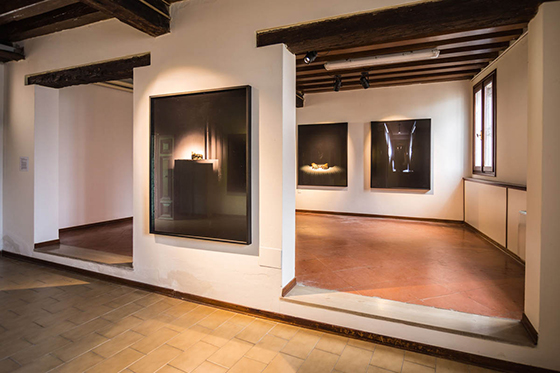 The truth is often elusive. Sometimes it needs to be hidden, and that is what “Unsolved” (2012) – a series of photographs by Hrair Sargsyan – is about. It refers to those descendants of Armenians who had to convert to Islam during the Genocide to avoid certain death. Their grandchildren and great grandchildren who live in Turkey to this day were re-baptized when they learned about their roots. But having found their forgotten identity they lost most of their social connections and relationships – the Armenian community is reluctant to accept them while the Turkish majority is not ready to partake in their personal stories. The portraits made by Sargsyan depict these people as incomplete – they are immersed in darkness while a flash of light only reveals glimpses of their eyes, arms or legs.

Memories of the Genocide certainly permeate the work and personal lives of the artists. “All the participants are grandchildren and descendants of those who lived through those days,” said Adelina von Fürstenberg, curator of the pavilion. “No matter where they were born – in Aleppo, Bethlehem, Yerevan or Los Angeles – they share a special sensitivity toward the issues of borders, geography and territory, as well as issues of survival, adaptation and historical memory, not to mention a dream-like image of a country in which many of them have not had a chance to live.”