MY AURORA HERO, an international video essay competition launched by UWC Dilijan and the Aurora Humanitarian Initiative, announced its five winners on November 19, 2020, during the online Awards Ceremony. In total, over 130 participants aged 14-18 from around 40 countries registered for the competition, which aim was to motivate young people around the world to reflect on everyday heroes who show courage and strength of character through their actions.

At the Ceremony, Mirza Dinnayi, Chair of MY AURORA HERO jury and 2019 Aurora Prize Laureate, emphasized the importance of coming together to tackle the most pressing humanitarian challenges across the world: “These days, we have a huge amount of injustice on the international level, on the local and domestic levels. We see violation of human rights, increasing numbers of refugees, IDPs. And it’s very important for each of us to have those heroes as a role model and show them to the world, to highlight some ordinary examples of our communities to encourage the young generation.”

Two winners, Natalia San Miguel from Peru and Tetiana Tkachenko from Ukraine, were selected by the jury. Each of them will receive $1,000 for a charity of their choice and $200 for themselves. “The story of this person is really amazing, and I couldn’t tell it in one minute. This means a lot for her and for me. The money I won I want to give to the organization that helps children with disabilities,” said Tetiana Tkachenko whose Aurora Hero is a woman working with disabled children.

Musimbi Kanyoro, Chair of UWC International and member of the jury, has announced the winner of the public vote on YouTube – Ekaterina Larionova from Russia, who will also receive $1,000 for a charity and $200 for herself. “I’m glad to be part of this initiative. I’m really excited to see the wonderful imagination, creativity and humanitarian values of young people like all of yourselves around the world,” said Dr. Kanyoro. Larionova’s video essay was dedicated to her grandmother, who she honored in her acceptance speech: “I sincerely hope that a lot of people will know about those who did so much for our world. And this will help us to make the world a better place.”

Alice Petrossian, UWC Dilijan Board member and MY AURORA HERO jury member, talked about the situation regarding the war in Artsakh where thousands of soldiers, many of them very young, had given  their lives for freedom and justice. One of them was 21-year-old Alen whose life and dreams were cut short by the war. He became the Aurora Hero for Elen Asatryan from Armenia.

“This was a unique opportunity to tell the world who my Aurora hero is. I’ll do everything to prove that he died for our bright future. I’d send my prize to the fund of soldiers 1000plus.am,” said Elen Asatryan, the winner of one of the two special prizes awarded by the jury. The second winner of the special prize was Oluwatimilehin Kevin Akinloye from Nigeria, whose Aurora Hero was a Nigerian woman fighting for human rights: “She decided to speak up for those who had no voice, especially for women and young girls.” Asatryan and Akinloye will each receive $200 to donate to a charitable organization and $50 for themselves.

In conclusion, Gabriel Ernesto Abad Fernández, Head of UWC Dilijan and jury member, thanked all participants, those who voted, partners, and jury members, and called everyone to stand together for shared humanity.

You can watch the Awards Ceremony below (in English). 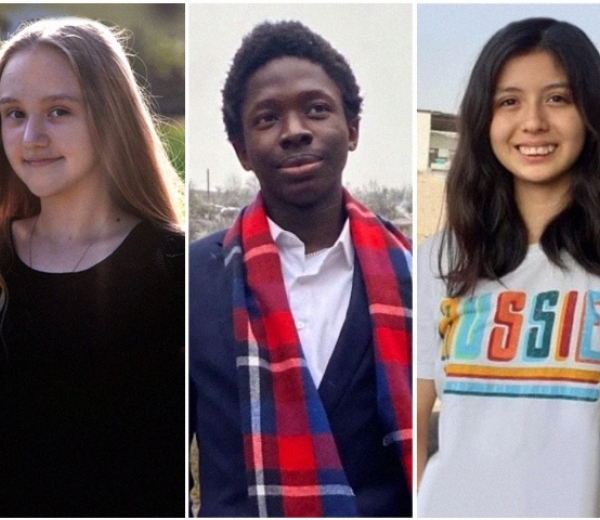