A Myanmar Lawyer advocating on behalf of the Rohingya people

Myanmar’s Rohingya Muslim community has only recently been featured in international headlines as the “world’s most persecuted minority,” but lawyer and human rights activist U Kyaw Hla Aung has been subjected to the harsh reality of persecution of this ethnic group since the early 1980s. Plagued by discrimination, corruption and systemic inequality, the Rohingya community continues to suffer under the stranglehold and political violence. Armed with little more than his knowledge of the law and a tireless determination, Aung has been successful in battling the inequalities of the system in Myanmar and helping his fellow Rohingya brothers and sisters seek justice.

After 24 years as a stenographer, Aung could no longer stand the racial and religious prejudice his people faced – stateless and without citizenship in the land they considered home after a 1982 Citizenship Law that excluded the Rohingyas as an ethnic group. It was discriminatory policies such as these that motivated Aung to champion Rohingyas’ rights – a choice that would leave him arrested and imprisoned repeatedly, spending a total of over 12 years in prison between 1986 and 2014 in jail. Throughout this period, Aung’s family suffered financially, and he was prevented from attending his oldest daughter’s funeral service despite repeated requests by his family.

Today, at 78 years old, Aung has witnessed and felt firsthand the effects of suffocating regulations constantly inflicted upon the Rohingya community. This ethnic group is consistently denied access to education, updated infrastructure, and free travel. As a result, the Rohingyas have been left behind as their cries for help have largely been ignored.

In the past, many Muslims – including those not part of the Rohingya community – served in respectable and high-ranking positions in government, law enforcement, the legal system, the medical community, academia and even the military. But, according to Aung, the government stopped accepting Muslims’ applications to these jobs years ago – cutting off many Rohingyas’ rights and representation. Today, the community is a prisoner in its own country constrained by restrictions on movement, land confiscation, pervasive surveillance and extortion.

“It is very difficult to get proper teachers – all the educated teachers were working for NGOs where they could get higher salary. Communication is very bad. All the roads were broken. No electricity was supplied to the Muslim area, and I could not go to my own land,” explains Aung. “There were two check points. If I wanted to go to downtown or to the State Immigration office, I would have to get permission from the security office to get security police. If I did get permission, then I would have to give them 25,000 Kyats [or USD 19] to cover their travel costs.”

But this was not a situation unique to Aung. Nearly one million Rohingyas have fled Myanmar since the late 1970s, and many of those who remain live in internally displaced person (IDP) camps in Sittwe, the capital of Myanmar’s Rakhine State, where conditions put even more lives at risk.

“The Muslims in Sittwe have been more restricted after the 2012 anti-Muslim violence,” Aung explains. “I cannot work openly. I cannot travel freely. I cannot speak out openly. The authorities do not listen to my voice and the government does not ask about our suffering.”

This is suffering that many claim comes at the hands of the government itself. Government troops have been accused of human rights abuses including murder, rape, kidnapping and arson – allegations the government repeatedly denies.

Amid such chaos, it is hard to believe that Aung’s 12 collective years of imprisonment have all come about as a result of peaceful and non-violent protests. His first arrest came when the government tried to confiscate lands from the Rohingyas, which Aung protested by drafting and submitting a legal petition. It was for this act that he was in captivity for two years, not released until fellow inmates destroyed the prison itself during a mass demonstration in 1988.

Decades and nearly a dozen internments later, Aung refuses to relinquish hope for his community, working tirelessly to improve educational opportunities for his people – both young and old. The obstacles he has encountered are numerous and burdensome: from salaries for teachers, furniture for schools and basic means of transportation. Nonetheless, he perseveres.

Aung’s fight for education is fueled by his foreshadowing of imminent harm – to allow the government to deny his people’s education allows them to discriminate against the Rohingyas.

“The authorities have been trying to make all the Muslims illiterate to become poorer. It is their policy to make the people illiterate, so that they can accuse uneducated Muslims of being immigrants from Bangladesh,” he explains. “[Without education], the people are afraid to ask any questions about their rights.”

As difficult as this work is on Aung, it may take an even greater toll on his family – left with little to eat and nowhere to stay during his time in prison. “My children did not have enough clothes, books, other materials and even umbrellas to go to the school,” he recalls.

But the plight of his people drives Aung to continue his thankless work. And he sees education as the key to breaking the cycle of abuse.

“We primarily need more teachers for education and facilities to improve the health care sector,” Aung notes. “500 to 1,000 people could die every year without a good health care system, but the whole community would die within a few years without good education.”

Subtitle:
U Kyaw Hla Aung has never stopped using his skills as an attorney to seek justice for the millions of Rohingya Muslims subject to persecution.
Header image: 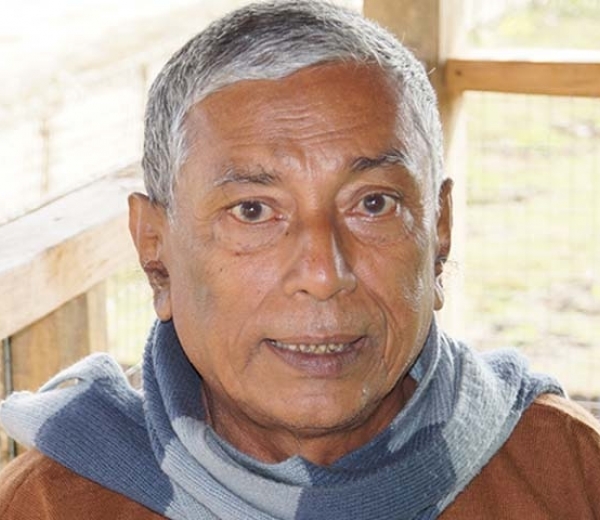