These were the official congratulations that Jean Henry Dunant received in 1901, when the International Committee presented him with the first-ever Nobel Peace Prize for his integral role in the establishment of the Red Cross, as well as the inception of what would become known as the Geneva Conventions. 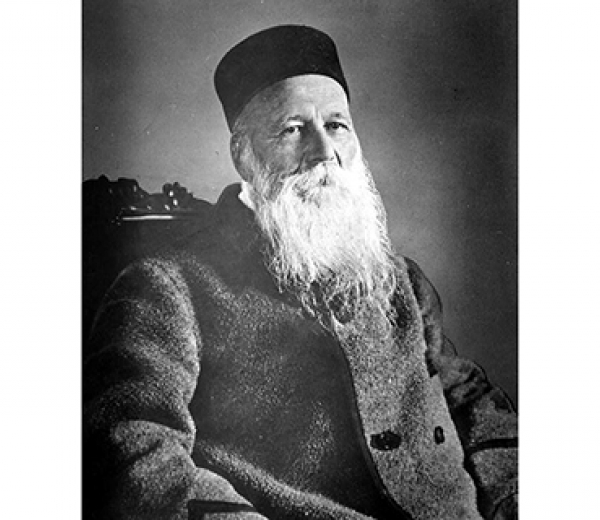 Text:
Jean Henry Dunant’s life was a series of ups and downs. Born on May 8, 1828 into a wealthy Calvinist Swiss family, he died alone on October 30, 1910 in a hospice. He enjoyed great fame and success in business, but in old age he was exiled from the Genevan society where he had once been a favorite and died in obscurity.
Dunant’s parents, successful and generous, devoted significant time and effort to orphans and parolees, the sick and the poor. They instilled in young Dunant the value of helping others. As a young man, Dunant himself became engaged in humanitarian activities, especially religious ones, because he felt that religion could address many moral issues in society. As an active member of the Young Men’s Christian Association (YMCA), at the age of 24 he co-founded a YMCA in Geneva.
What inspired Dunant to establish a global humanitarian organization? It was in the course of his business activities that he devised the ambitious scheme.
Along with his vibrant social life and philanthropic efforts, Dunant also strived to reach his full potential in business. He became the president of the Financial and Industrial Company of Mons-Gémila Mills in Algeria, where he was to exploit a large tract of land. To obtain water rights he decided to personally meet Emperor Napoleon III who was then leading the French and Italian armies that were driving the Austrians out of Italy. The trip to Solferino, Italy, would change Dunant’s whole life.

Arriving in Solferino on June 24, 1859, Dunant witnessed one of the bloodiest battles of the century. In its aftermath, devastated by the sufferings of thousands of wounded soldiers left on the battlefield, he organized the locals, especially women and girls, to help injured soldiers from both sides.

They acted under the slogan “tutti fratelli” (“all are brothers”), coined by the local women. Dunant believed women would play a decisive role in the future of mankind – a potential that should be unleashed for humankind’s sake. “The influence of women is an essential factor in the welfare of humanity, and it will become more valuable as time proceeds,” he later wrote.
Image: 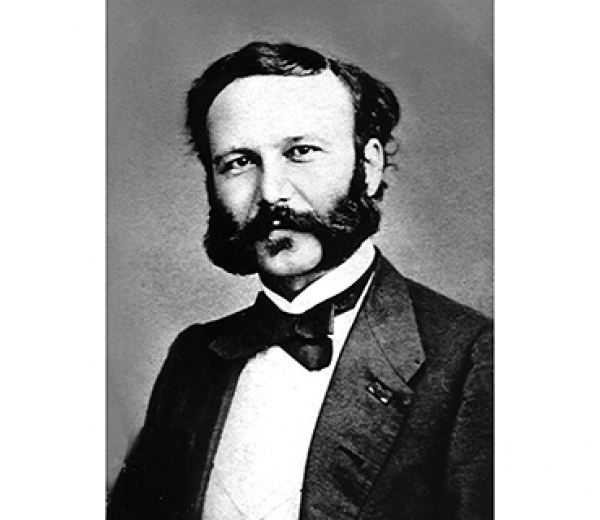 Text:
Back in Geneva in 1862, Dunant recorded his memories of the battle of Solferino and his concerns in a small book “Un Souvenir de Solférino” (“A Memory of Solferino”). He described the battle as “sheer butchery; a struggle between savage beasts, maddened with blood and fury.” He also developed the idea that a neutral organization should exist to provide care to people affected by war: “But why have I told of all these scenes of pain and distress, and perhaps aroused painful emotions in my readers? … It is a natural question. Perhaps I might answer it by another: Would it not be possible, in time of peace and quiet, to form relief societies for the purpose of having care given to the wounded in wartime by zealous, devoted and thoroughly qualified volunteers?” he wrote in his book.

His scheme was destined to become the cornerstone of the organization that would soon be known all over the world as the Red Cross.

“Societies of this kind, once formed and their permanent existence assured, would naturally remain inactive in peacetime… They would have not only to secure the goodwill of the authorities of the countries in which they had been formed, but also, in case of war, to solicit from the rulers of the belligerent states authorization and facilities enabling them to do effective work,” wrote Dunant.
In February of 1863, the Geneva Society for Public Welfare appointed a committee of five, including Dunant, to pursue the implementation of Dunant’s ideas. The result of the first meetings was the establishment of an International Committee for Relief to the Wounded of War. This organization later became the International Committee of the Red Cross.
Image: 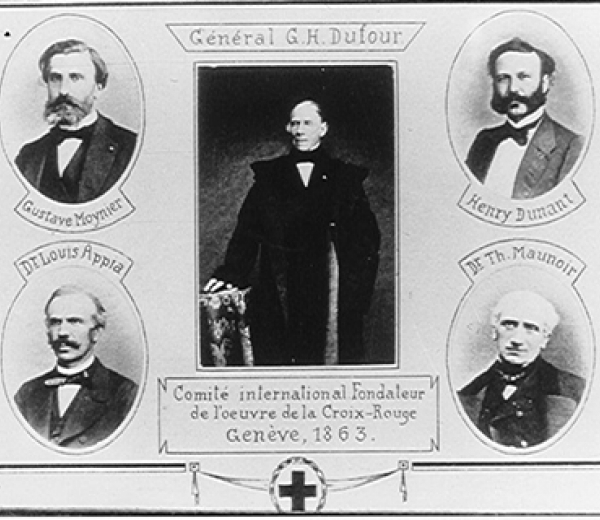 Text:
At the same time, in his book Dunant also put forward ideas about the need for “a government treaty recognizing the neutrality of the agency and allowing it to provide aid in a war zone.” This idea ultimately led to the first Geneva Convention, signed in 1864.

Dunant’s devotion to his humanitarian activities and the neglect of his businesses led to the downfall of his company, scandals and eventually bankruptcy in 1868.

The same year he had to resign as Secretary of the International Committee and move to Paris. In his memoir, “Les Débuts de la Croix-Rouge en France” (“The Beginning of the Red Cross in France”), he described being reduced to dining on a crust of bread, using ink to blacken his coat and chalk to whiten his collar and finding himself sleeping in uncomfortable conditions.
However, he continued advocating for his ideas during and after the Franco-Prussian War of 1870. He even initiated an international congress for the “complete and final abolition of the traffic in Negroes and the slave trade” in London in 1875. Until 1886 Dunant lived in poverty and travelled throughout Europe on foot.

Finally, he ended up living in the Swiss village of Heiden, where he was sheltered in Room 12 of the local hospice for the last 18 years of his life.

However, he was not an unknown pauper. In 1895, journalist Georg Baumberger wrote an article about his meeting with the founder of the Red Cross in Heiden. Baumberger’s article struck the right note, and Dunant was honored and celebrated. Later on, in 1901, he was awarded the very first Nobel Peace Prize (with Frederic Passy), becoming Switzerland’s first Nobel Laureate.
Despite his prizes and international acclaim, Dunant remained in Room 12. He never spent a cent of the prize money he received. Instead, he left the money to various charitable organizations in Norway and Switzerland, and endowed a bed in the hospice for the poorest in Heiden to use in times of need. On October 30, 1910 he was carried to a simple grave without any mourners or funeral ceremony according to his wishes.
Image: 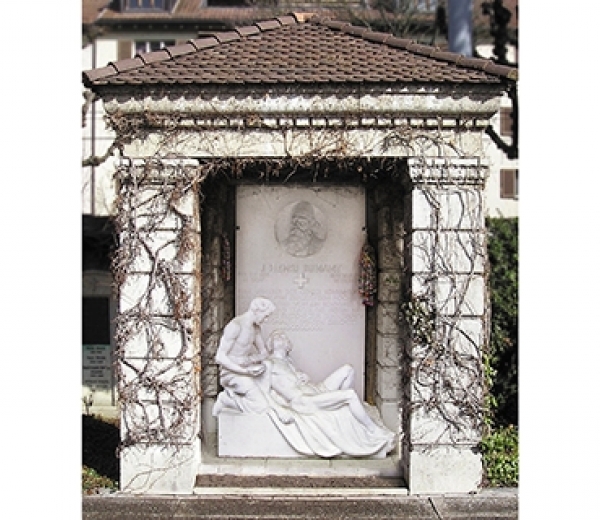 Henry Dunant transformed his personal idea into an international organization, the Red Cross, which was to become a three-time Nobel Prize Laureate. During its 153 years of activity, the International Committee of the Red Cross has remained the world's largest humanitarian network, helping people affected by war and calamity in approximately 150 countries and bringing to life the dearest dream of its founder Jean Henry Dunant, the man behind the Red Cross. 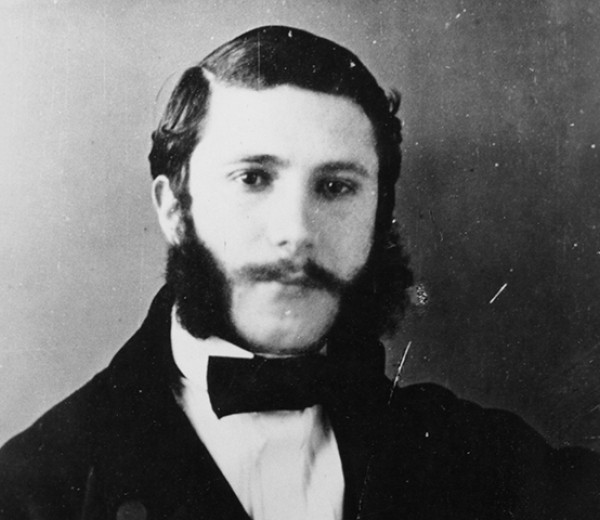